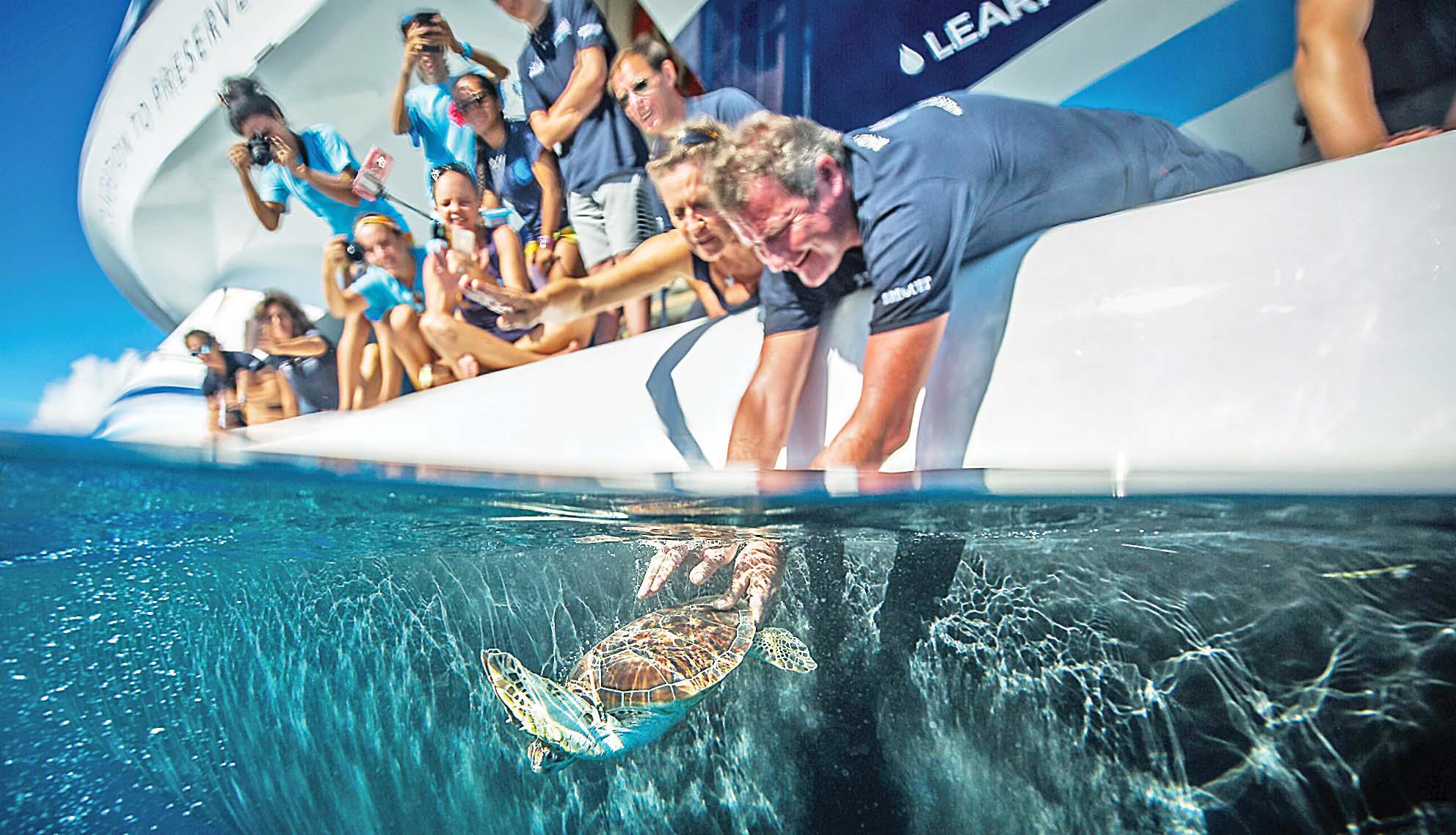 THAT is a delightful photo indeed (FT 09/01). The picture of the crew of the Race for Water vessel. While they are releasing one turtle it teaches us a huge lesson that we must preserve our marine life. Sadly, man is the worst species on Earth, we trash our oceans and now a study by healthy ocean advocates has indicated that there will be more plastic in the sea than fish. It’s a toxic time bomb. The study has also revealed that 70 per cent of fish have microplastic. It is frightening. ALLEN LOCKINGTON, Kava Place, Waiyavi, Lautoka

YOUR The Fiji Times front page picture and page 3 reports by Race for Water Foundation on the “toxic time bomb” is a scary reality we face. Fiji having 70 per cent microplastic in fish compared with New Zealand at 33 out of 34 and the rippling data keeps going. Plastic waste is a universal
issue and the awareness must start now. Imagine the statistics of more plastic than fish in our oceans by 2050. Recently, there was an article I read where a dead whale was operated in Indonesia and 19 tons of plastic was removed. This is scary indeed. At home in Fiji I agree that more awareness is required at schools, however, the focus should really be on the source. Where do these plastics originate from and if you look at Fiji it is the supermarkets, shopping and another major area that the relevant authorities must look at are the municipality markets. There is a huge trading of plastic and the irony here is when people buy fish for consumption plastic is the most common thing used. Supermarkets have a control process with plastic tax levies but what about the markets, fish stalls, the barbecue and market stalls on the road sides. Plastic bags are traded and thrown everywhere. Prevention is better than cure and 2050 is fast approaching, we need to work hand in hand with organisations such as Race for
Water Foundation. Let’s do it right first time. For fish, for Fiji forever. Joka. SHALWYN PRASAD, Mukta Ben Place, Nabua, Suva

Honourable Premila Kumar is quoted saying that she needs new and younger chief executive officers to run town and city councils. I also remember we had special administrators who used to help the CEO to run the affairs of town and city councils. Looking at Lautoka which doesn’t have a special administrator for the past four years and Lautoka City Council has done very well. The owed city rates dropped from $4.63m in 2008 to $1.571m in 2018. Credit should be given to the CEO of Lautoka who held meetings with the ratepayer’s association of Lautoka highlighting the unpaid issues to the ratepayers association. I still remember Mr Rounds of Simla, Lautoka who with the other ratepayers association committee members went house to house asking people to pay town rates so the city council can do projects and other things that the ratepayers wanted. Today, anyone can see what can happen when town councils and ratepayers work hand in hand. I believe that every town or city councils should work with ratepayers association to take the country forward. We don’t need younger CEOs but what we need is a good relationship between the ratepayers and the city or town councils. Lautoka has done great without a special administrator and l believe that Lautoka City Council doesn’t need a special administrator. All we need is to have regular meetings and work together for the betterment of our country. Narayan Reddy President, Lautoka Residents and Ratepayers Association

I request the Minister Premila Kumar before declaring Nadi a city if she can meet the ratepayers of Waqadra, Malawai and Nacava to name a few residential areas and see for herself the condition of drainage, roads and rubbish before the declaration is made. We, ratepayers, have made complaints to the council, and nothing happened because they are not elected, they give us ratepayers excuses as they are only workers carrying out instructions. I hope you will be able to make a real change to the ratepayers. Naca Nabukavou Nadi

Government ought to seriously consider and construct two ferry terminals to service the two main islands. Natovi and Nabouwalu would be the appropriate locations for these terminals. The terminals need to be efficient enough to handle at least 1000 people. Seating, canteens, ticketing and check in/check out counters, lavatories, baggage/cargo drop off/collection counters, a police station, a biosecurity station, a marine checkers station, a vehicle check in-check out section, and whatever else is required to cater for the ferry operators and customers. The terminal needs to be stationed in such a manner that no one and no vehicle can pass through it unless you are a paid customer or service employee of the terminal. There needs to be only two pathways from the terminal to the ferries, one for the vehicles, and the other a covered walkway for the passengers. The concept is a simple one and if government can get funding some of us here are willing to assist design and manage its construction. At present, operations at these two main transportation hubs are chaotic and a continual mess! No one can seem to get it right! Simon Hazelman Rava Estate, Savusavu

Nayagodamu Korovou may have pioneered in Fiji what is a common practice in education across the globe. He has produced some copies of Year 12 Maths textbooks containing iTaukei translations for students to comprehend concepts better. School text materials in many countries are printed in the local language to make teaching and learning an easier exercise. It will not be a digression to initiate that Fiji’s school materials are predominantly
present in English language which could be hindering student learning. We tend to lose interest in those things which are difficult and beyond our
comprehensive abilities. Education should be interesting, not difficult. Fiji is a multilingual nation and it will not be easy to adopt Mr Korovou’s brilliant idea. Regardless, it should be taken on board by the education ministry for consideration. MOHAMMED IMRAZ JANIF, Natabua, Lautoka

This year’s McDonald’s Fiji Coral Coast 7s title will be hotly contested. Last year, the Police side walloped First Light Taveuni 34-7 in the final. In the thrilling semi-finals, Police beat Saunaka 12-7 while First Light Taveuni upset Ratu Filise 19-0. Now that the defending champion has recruited stylish playmaker Kiti Taliga, the Nasova outfit looks favourite to defend its title although the likes of Dratabu, Wardens, Ratu Filise, Tabadamu and Suva Stallions will pose a threat to the defending champion. With days counting down to the Hamilton 7s and the fact that contention for a spot in the 13-man squad is tight, the McDonald’s Fiji Coral Coast 7s tournament is surely going to add spice and flavour. Our national side missed out taking part in the Punta del Este (Uruguay) 7s tournament at Playa Montoya, but I’m hopeful of a good outing in NZ. With the inclusion of giants Paula and Josua and elusive playmakers Ratu and Tamani, Gareth Baber’s headache is bound to intensify. After all we would love a repeat of last year’s win in Hamilton! Rajnesh Ishwar Lingam Nadawa, Nasinu

It would appear that our new Minister for Local Government, despite heading a ministry of “local governments”, is now setting expectations of not having municipal elections (FT 08/01). I believe that “younger and progressive thinking” applicants sounds very good in job vacancy adverts, but I as a ratepayer want to be able to have a say in the ballot box. If those old and complex legislations do not allow for free and fair municipal elections, I believe they should not allow for collection of rates. I believe we should freeze all payment of rates until new legislations are drafted and elections held. James Mastapha Evetts Place, Suva

What a weekend of rugby in France for our boys. Peceli Yato scoring for Clermont, Jone Qovu scoring for La Rochelle, Leone Nakarawa was in his best form for Racing 92 while others who may have not scored tries for their respective clubs displayed their Fijian flair. Even before the Flying Fijians beat France in the Test match late last year, our boys had always been popular with the French clubs. More of our boys should be heading to France in the future as they seem to dominate in all aspects of the game while there. Best wishes to all our boys in France and may we spring more surprises in the upcoming Rugby World Cup. Tomasi Boginiso Nepani Rd, Nasinu

I HAVE noted from the media reports that while on her recent tour to the West, the new Minister for Local Government took the opportunity to meet representatives of the business community in Nadi and Ba. However, I am disappointed that no public consultation was held in Lautoka. Like other municipalities, we also have issues of concern to raise with the minister. I hope that we will be accorded the privilege to have an audience with her during her next visit to the Sugar City for an open conversation. SELWA NANDAN Lautoka

Can our Government end the daylight saving a week before school. It takes time to adjust ourselves when daylight saving begins and also when it ends. I feel for our schoolchildren when my six-year-old grandson asked me, and I quote: “When will people stop playing God”? John Brown Drasa Vitogo, Lautoka

I believe the manner in which Government treats senior and experienced teachers, I hope the trickle-down effect will not seriously affect students. Dan Urai Lautoka

I would like to thank the Government for extending streetlights to roads outside town and city boundaries. The lights are so bright now that on a number of occasions I have seen vehicles travel on our roads without headlights on. Sailosi Naewe Naduru Rd, Nausori