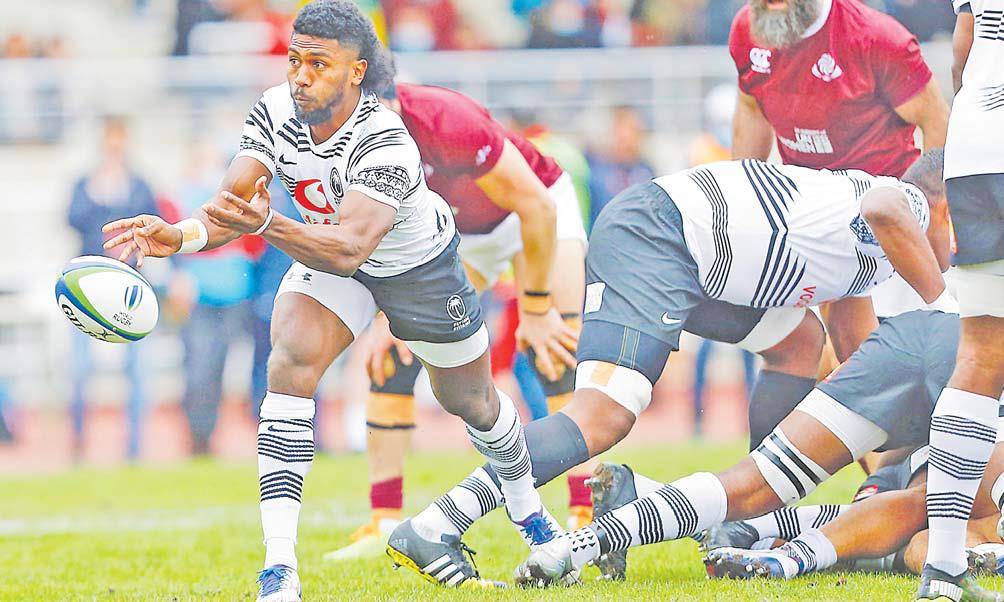 Flying Fijians halfback Frank Lomani delivers from the base of the ruck against Georgia in their last November Autumn International match. Picture: MARTIN SERAS LIMA

Flying Fijians head coach Vern Cotter is not happy with the results of his team’s performance in the Autumn tour. He said that the team could have done much better with good results. Cotter wants to get the players attitude and mindset sorted out. His comments are a warning signal for the Fijian Drua heading into the Super Rugby competition that will have turnover expenses of $15 million to keep them running. Satisfactory performance results will definitely mitigate funding shortfalls so it will definitely be all hands on deck. Meanwhile, a very attractive group photo of our Fiji 7s team posing after training in Dubai is on the front page of FT 24/11. Suddenly, the memory loss guy from NSW has deviated from his so-called Mickey Mouse 7s rugby to worry about political parties blowing their own trumpets and beating their own drums. Jan, our 7s team has just embarked on a new mission after the history-making Olympic Games in Tokyo, Japan. What can you say? Absolute nothing because our diehard fans will keep motivating our gladiators to get pride and glory for our beloved nation. Then again, who says “there is no freedom of speech”. Kaise baat, Jan Mohammed? RAYMOND SINGH Marine Drive, Lautoka

Reading Simon Hazelman’s explanation (FT 25/11) in response to Jan Nissar, I get where he’s coming from. However, while we may all be of different ethnic backgrounds and cultural diversity, there’s one thing, I believe, should’ve happened even before independence. And it’s this. Every child, regardless of their ethnic background or which school they attended, should’ve been taught the language and culture of our indigenous people. Integration would’ve been an almost natural consequence of this and it would’ve gone a long way in helping the binding and bonding process. So today, there would’ve been a deeper understanding and appreciation of indigenous cultural sensitivities. But here we are, in the 21st century, still regurgitating the same old, same old and going nowhere fast. All because some politicians lack the emotional intelligence, vision and will to truly understand and appreciate the simple process of creating a great big melting pot, much like that 1969 song by British group Blue Mink. Colin Deoki Australia

Everyone knows the tourism industry has a peak and slow period. Christmas and New Year’s week are peak periods. After January 1, everything slows down in the hotel industry until April, when tourism numbers begin to improve. Opening borders in December means everything will slow down by the end of January. I hope the virus would have slapped Australians silly to travel to Fiji during the slow periods. Otherwise, I believe, it’s the hoteliers that will cop the added cost with no assistance from Government and limited working days for its workers. Dan Urai Lautoka

The recent study by the FWRM shows that 1 in 5 women have experienced sexual harassment in their workplace F/T 25/11/21 (Pg. 12). To the survivors, remember, it’s not your fault or to be blamed if you are being sexually harassed in your workplace by those in power or higher authority. Say no to sexual harassment which can even result in losing your job rather than being a sex slave to sexual predators. Shame on those sexual predators who camouflage themselves and claim to be honest human beings and men of principle. #STOP sexual harassment in your workplace and public utilities. Jioji Masivesi Tadra-Votualevu, Nadi

In this festive season, as we are working towards reviving tourism to revive our economy, we are also bracing for cyclones as predicted. Climate change and COVID-19 issues are also our major distracters that keep us moving in circles to address those that are beyond our control. Safety first. Life safety is everyone’s priority. Tahir Ali Hamilton, New Zealand

An old-age home is a shelter that is home to the older and needy people. In old-age homes, these people are taken care of and they have food, clothing and shelter. A recent survey shows there are more applications pending for senior citizens’ homes in Fiji. Is getting old a crime or do they not have any space for older members of our family, parents or grandparents? The number of senior citizens who are facing abuse in their own homes continues to rise, which is evident from those admitted in old-age homes. This situation is so bad that children are leaving. Human beings are social creatures. Our connection to others enables us to survive and thrive. Yet, as we age, many of us are alone more often than when we were younger, leaving us vulnerable to social isolation and loneliness and related health problems such as cognitive decline, depression and heart disease. Fortunately, there are ways to counteract these negative effects. Karma quotes about what goes a comes around in our life. NEELZ SINGH Lami

I BROKE out laughing when I saw the post online but my mother did not find it as hilarious as I did. After that, we had a minor squabble over this subject. Then it occurred to me that this is a clear depiction of our society’s generational and mindset disparity. When trying to target a specific set of individuals, I’ve always believed in “speaking their language”, for instance, when I try to explain a policy to people at my place of work, I try to explain it in a way that they can understand and, at the same time, realise the seriousness of breaching it. I suppose this is what happened when the anonymous NGO designed the T-shirt to promote AIDS prevention in Fiji. As they say, as long as the message is delivered, whether it be kaba or rubber, as long as it is understood by the intended audience. JANINE RAKUITA Makoi, Nasinu

Thank you, Simon, for your explanation. I respect your views. I am of the view that the iTaukei and the kailoma are no more special than anyone else. In fact, we all are very special, and equal. So, a political party only to promote one section of the community would go against the teachings of God (maybe it doesn’t, I actually do not know). Perhaps we should have a legal system and jobs and promotions skewed towards one section of the community. But all that was already tried 34 years ago. Fiji was declared a republic at the time, that did not seem to help. Maybe Fiji should be declared a Christian State (since “your findings indicate that the iTaukei and Indo-Fijians are very different peoples”). But I doubt that will help. So, we agree to disagree. In Australia, we call the mentally challenged “special needs” people. I think it is appalling that you put some people into that category. I still think you should change whatever it is you are drinking. Try rum and cola with a twist of lime. No, that is not my favourite drink, I am just trying to be helpful. But I would be interested to read the paper on “your findings” about the difference between the two major ethnic groups in Fiji. It would make for an interesting reading, don’t you think, Rajen Naidu? Jan Nissar NSW, Australia

As a long time keen amateur astronomer I’ve not only been looking at galaxies, stars and planets for decades now but I’ve been following the much talked about most powerful telescope that has ever been made for over the past two decades. The James Webb Space Telescope, which is anticipated to revolutionise our understanding of the universe, has been in development for the past two decades, with construction and launch being pushed back so many times over the years. The telescope was scheduled to be launched on December 18, but yet again, NASA has pushed it back to no earlier than December 22. A very slight delay considering the time and billions of dollars it’s taken to get this far, as many including myself are excited that we are about to see what we’ve never seen before. This telescope is going to unfold the universe in ways that are unimaginable and it is going to change the way we see and understand our world. While we are so engrossed and focused on the many issues of our tiny nation in the middle of the South Pacific Ocean on a planet that is no bigger than a single grain of sand, when we put into perspective how large our universe is, this telescope is about to show us just how insignificant we are in the big picture. This beast of a telescope is going to reveal and uncover to us earthlings the most distance of secrets. Let’s hope for a successful launch that we get to see our universe in much more detail. Simon JC Hazelman Rava Estate, Savusavu

Students who have been more adversely affected than others by the current COVID-19 environment need extra attention and encouragement from their parents, extended family members and friends to focus on the importance of learning. Meanwhile, the nation’s top students and repeaters need to be given the opportunity to sit and pass their external exams. Ecelini Naivadra Tuisowaqa Rd, Namadi Heights, Suva

VINAKA vakalevu momo Allen and your team for the benevolent duty you’ve all shouldered to continue assisting and providing for those families who are facing financial difficulties to provide food and other basic necessities for their household. Your excellency the President and honourable Prime Minister, Ratu drau qai bau nanumi na qase Allen ena nona veiqaravi vinaka! A medal for him and each for his team for their distinguished and caring service to the community. God bless and forever Viti. AREKI DAWAI Maharaj Place, Suva

The Barbados and India reps to Glasgow gave such wonderful speeches, they didn’t mince their words. India told the British off. Us gang? Allen Lockington Kava Place, Lautoka

Most respectfully, with all due tact and diplomacy, I believe beards do not suit some executives. They make you look scruffy and untidy, to say the least. Unkempt, to be precisely correct. Just being as honest and truthful as possible. Public perception are almost accurate and perfect indicators, rightly or wrongly. No offence meant. Ronnie Chang Martintar, Nadi

So $1.6 billion dollars worth of marijuana have been uprooted just for this year alone on the island paradise of Kadavu. With this rate, I believe these drug farmers even though illegal in their activities could pay off our national debt within six years. Sa jekia! M S Kaleca Nakasi

It is always a sad sight to see residents use Nadi Town Council roadside bins to “dump” their household rubbish. Amazing how some residents will just drive by and place their bags of household waste at roadside bins. These bins are not meant for your household refuse. Very sad indeed. Much adult education is badly needed. Ronnie Chang Martintar, Nadi