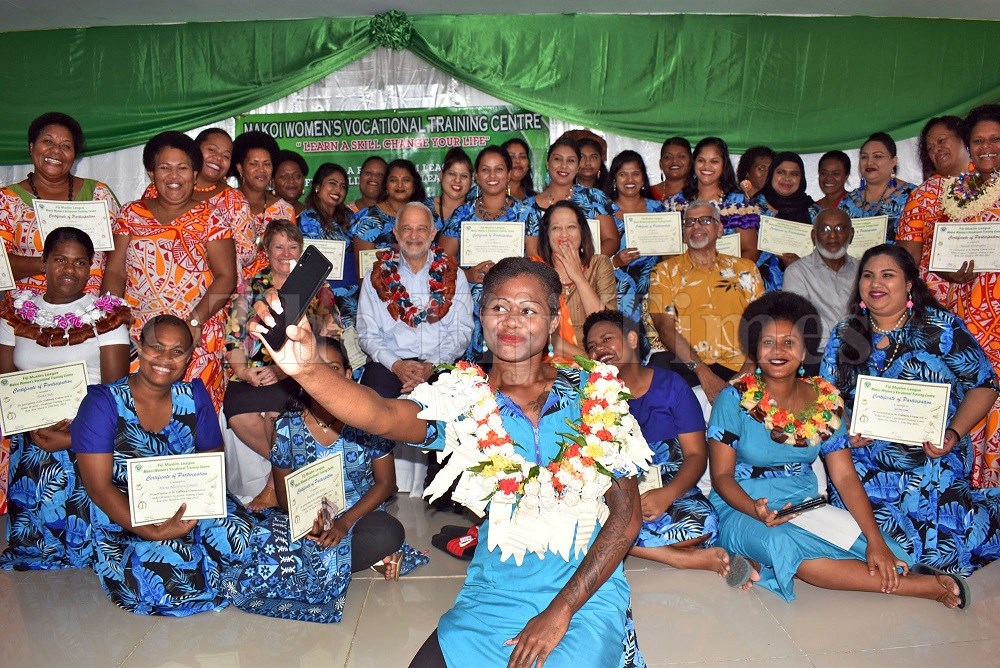 I found the story by Elena Vucukula titled “Domestic violence survivor graduates from centre” (FT 26/05) so inspiring and heart-touching. The story focused on a 25-year-old domestic violence survivor Salata Laqere, who is a mother of two and graduated with a certificate in culinary arts from the Makoi Women’s Vocational Centre. Despite suffering from physical and verbal abuse at the hands of her former husband and his family for six years, the daughter of a Bua farmer managed to accomplish her goal of securing a qualification that would boost her chances of getting a secured job. She has set a perfect benchmark for women in our communities who are victims of domestic violence that attaining a qualification has no barriers and if one tries hard, success will follow. Good on you Salata and best wishes for the future! RAJNESH ISHWAR LINGAM, Nadawa, Nasinu

I reiterate the call made by Dr Selina Kuruleca earlier this week for parents/guardians to look out for how their children are behaving and get professional help if their behaviour is not normal. This call was made after revelations by Education Minister Premila Kumar that students were being found with suicide notes in schools. According to Lifeline Fiji — one of the local qualified NGOs that addresses mental health issues — the youngest suicide victim in Fiji was a seven-year-old child. Now that is a very sad reality and should be a wakeup call for us parents and guardians. I believe our children also experience a lot of anxiety, stress and frustration associated with COVID-19 and its related restrictions and socioeconomic issues we currently face in Fiji. It’s about time that the Ministry of Social Welfare and relevant stakeholders including Save the Children Fiji and other UN inter agencies give us parents/guardians via mainstream media, especially TV and newspaper and even online platforms, tips on how to recognise signs of child suicides. It’s not a taboo issue anymore. Jioji M Cakacaka Votualevu, Nadi

With all these diplomats gracing our shores lately, makes me think what happens to all the gifts — the usual carvings, the wau, tanoa etc — given to them and the ones received from these diplomats. Maybe it’s displayed in someone’s home. I remember seeing similar items in flea markets abroad. Scribe! You got any left from our kava parliament. Nigel Fiu Owls Perch, Lautoka

The need to be heard

Many just won’t read this because it is about politics. The strange thing is, that so many people do not seem to understand that politics affect everything you do in your own life. There is a real disinterest in politics nowadays which is understandable because we often feel like no one is listening to us unless we are rich or a big corporation. Many people do not even understand the difference between socialism, dictators, communists, fascists. Most just follow along, like it was in the Bible. We all have different needs and desires in life. We all just want to live a life that is full, with our families or chosen families, with a spouse, or just live a single person life. We want a work-life balance and some of us want to create communities where everyone is equal, inclusive, and can be heard when they want to be heard by our employers, our partners, our families and yes, you got it, our Government. But that is the problem, isn’t it? I believe we do not get heard by many and sometimes that can include our own families, but surely includes our Government. If we are living in a truly equal and inclusive society, everyone would have their chance to be heard by the Government. Many of our politicians are not listening to most of us as people are just trying to survive. I’d like to raise the question, who truly cares about the Fijian people? Wise Muavono Balawa, Lautoka

How will the Asian Development Bank (ADB) ensure the grant of $6.4 million given just before the election will not be used for vote buying? Kirti Patel Lautoka

I am trying to get around my head on the logic behind the $100 and $50 payments that the Attorney-General Aiyaz Sayed-Khaiyum announced to be rolled out on Vanua Levu this week. As I was comparing the rise in the cost of living and the amount given to assist the unemployment on Vanua Levu, something does not seem to make sense. I believe, first and foremost, the Government should have a clear definition of unemployment followed by a physical study to determine who is really unemployed because I know many on Vanua Levu are self-employed, these are
farmers, fishermen, weavers and so forth. If a farmer or a fisherman, who is classified as unemployed, is earning $500 a week and a security officer in Labasa or Savusavu, classified as employed, earning $200 a week, who would be more suitable to receive the assistance? Secondly, when the real unemployed are identified and if the Government is really willing to assist them, then at least offer more than $100 because in comparison with the cost of living, these monies are worth peanuts. Without a clear definition of unemployment and the analysis work to determine who really is unemployed, I am confident to say that such assistance is just reckless spending that will just add to more national debt and more burden for the Fijian people, in particular the very ones who they are now planning to assist. My personal opinion on this matter is simple, this is what people call “vote buying” and nothing more. KOSITATINO TIKOMAIBOLATAGANE Vuninokonoko Rd, Navua

There is a lot of action locally on a daily basis. Hats off to The Fiji Times for the full coverage in terms of fairly reporting all the important information. Political events aside, there is a greater hype for sporting events this week. I bet everyone is looking forward to the Digicel Fiji FACT, London 7s and most importantly, the clash between the Swire Shipping Fijian Drua and the Waikato Chiefs. Pita Gus Nacagilevu Sowakula and Emoni Narawa, the two Fijian Chiefs, have declared their interest. They have specifically made it public that come this Saturday, they would put aside their Fijian heritage and concentrate on making the Chiefs win this final battle at Churchill Park in Lautoka. It is crystal clear that while some are playing for the national Fijian pride, others are pledging their allegiance to the jersey that they wear. As it is evident, this is the maiden journey of the Drua. If we believe in the fact that Rome was not built in a day then we should also agree that even Napoleon was defeated in his first battle. It will take a gigantic amount of practice to make a significant mark in the Super Rugby series. The Chiefs were founded in 1996 and have achieved immensely in the past decade. The Fijian Drua standing up to the Chiefs is already half the battle won. Nevertheless, I will definitely support my team this Saturday. See you there. Win or lose, always the Drua blues. Toso Drua, toso! DINESH KUMAR Ba

I’m expecting a bumper crowd at Churchill Park on Saturday as the Swire Shipping-sponsored Fijian Drua side hosts the Gallagher Chiefs. The Drua is playing the Chiefs on home turf and the vibrant crowd will play a huge role in the ability of the Drua to rise and cause an upset. The boys have not done too well against NZ oppositions, getting hammered by the Hurricanes (67-5) and Crusaders (61-3), although they fought a brave battle against the Blues and Highlanders, going down 35-18 and 27-24, respectively. The Drua went into the break against the Highlanders leading 24-17, only to surrender their lead via a try and penalty. Passionate and patriotic Drua fans are bracing for another electrifying performance from the boys in the Sugar City. The team was in high spirits and if we can get our acts together, I can smell an upset on Saturday. For that the side has to use every ounce of strength and energy in the reserve tank. Rajnesh Ishwar Lingam Nadawa, Nasinu

I am so grateful for the $100 help the very caring FijiFirst Government is giving the people of Vanua Levu. The Government knows $100 is big money for the unemployed. On the other hand, when I look at the allowance given to the PM, A-G and other ministers for just one night out of the country, I can never justify it. Well, the A-G already said you can not compare fish and apples. Sukha Singh Labasa

Price control and price locking, maybe the answer we are seeking, to the growing inflation, that is seen as price escalation. It seems like the systems to devise, to guard against the price rise. We have to adapt and adjust, to the current crisis. No one should really be left behind, during this very trying time. Edward Blakelock Pacific Harbour

IN the vuvale spirit which the new Australian Foreign Minister Penny Wong hopes to foster in the Pacific family (FT 26/5), can she appeal to the mob in power in Fiji to do the right thing and release the grant to USP which they have arbitrarily withheld causing harm to the work the region’s premier institution of higher learning is meant to do for the Pacific island people? (Withholding grant risks FT 25/5). Rajend Naidu Sydney, Australia

I believe Levuka Hospital has been without an ambulance for months and the X-ray machine has been lying idle, inoperative for more than a year now. Yet government leaders keep harping that all is OK in the country. Isa! Anthony Sahai Suva

At one time, I was a dreamer. Now I am more of a doubter. Hope someone can plug the holes so I can once again be a dreamer like before. Joeli Naleca Natabua, Lautoka

Nothing like noticing the vigilance of some drivers and seeing little humane acts on our streets. Drivers jumping out to scoop lost puppies up and delivering them to safety. Good to see more instant acts of kindness towards our animals and vigilant drivers. Joan McGoon Vomo St, Lautoka