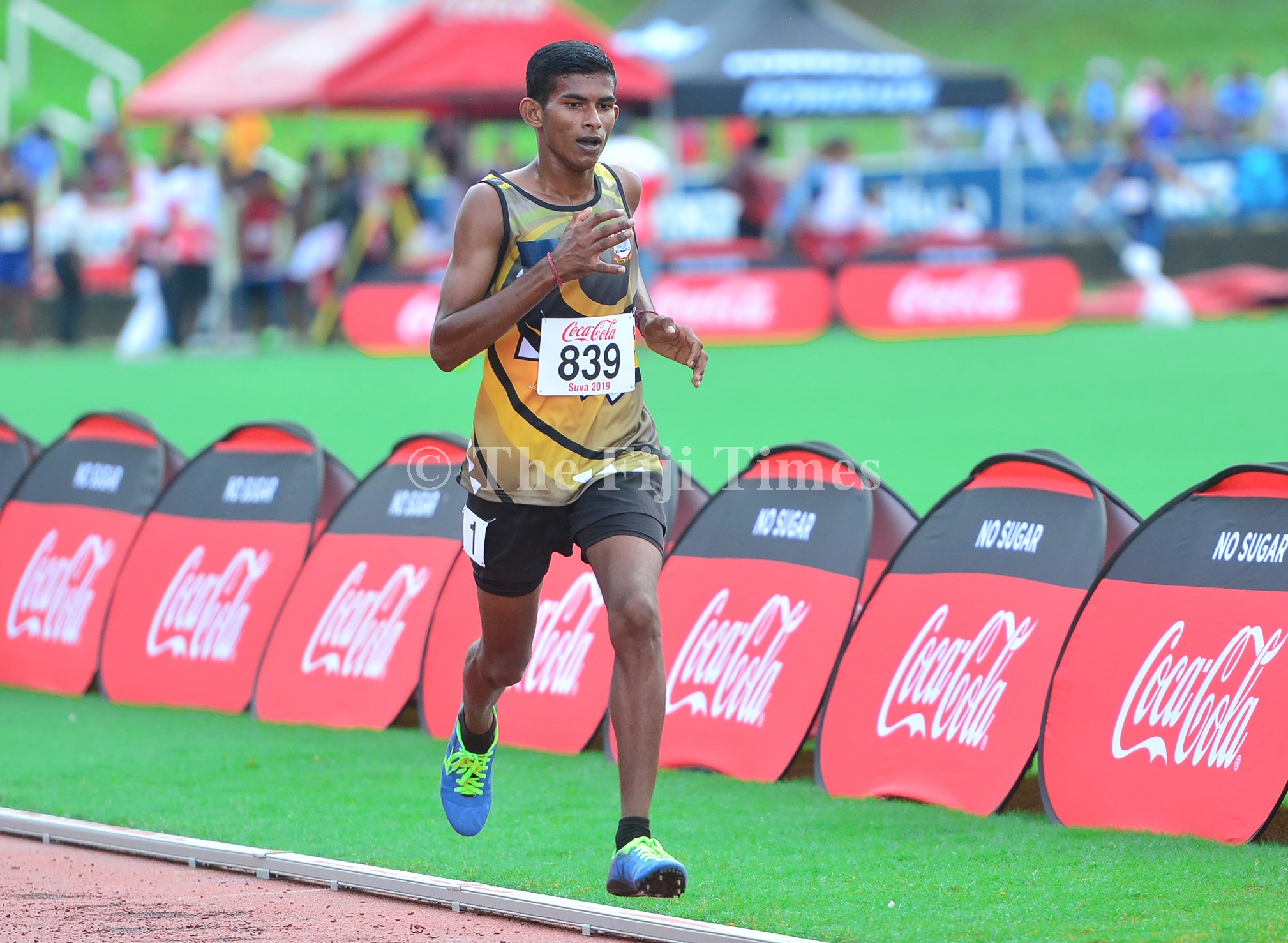 Yeshnil Karan of Tavua College races to the finish line before winning gold for his school in the boys 3000m final on day two of the 2019 Coca Cola Games at the ANZ Stadium in Suva. Picture: JOVESA NAISUA

A ‘gem’ of an athlete

THE name Yeshnil Karan will be remembered in years to come.

The Tavua College student surprised many when he scooped gold in the senior boys 1500m and 3000m event and despite this achievement, Yeshnil missed out on a spot to the Pacific Games in Samoa.

I believe this controversial decision upset and disappointed many people.

Yeshnil is a “gem” and I hope Athletics Fiji will nurture him for future regional and international meets.

His parents and the Tavua College family showered him with love and support after his victory and I wish him all the best in his academic work and exams!

THE different mechanisms put in place to stop littering is to promote proper disposal so that the environment is protected.

In turn, Earth is protected.

For the longer term, if we genuinely want to protect Earth from the effects of rubbish, shouldn’t our focus be the reduction in production of rubbish?

Rubbish is being produced at an alarming rate.

There are so many things that are used for a short time and just discarded.

Does it really make any difference to Earth if we collect huge amounts of rubbish and pile it at specific locations?

These piles are getting bigger and we are beginning to stretch Earth’s limits.

Stopping littering is limited to the Earth does not need rubbish in the river, sea and land.

It really is, the Earth does not need any rubbish at all.

We may have gone to the same school Anthony but we definitely had different English teachers.

The Attorney-General’s statement “marijuana is not necessarily a key issue, but we need to focus more on what we call synthetic drugs” does not mean that marijuana is OK.

I believe he was basically implying that synthetic drugs are more of a bigger problem compared with marijuana.

You can go see for yourself that fact.

Marijuana is not potent enough to kill people.

Also, I believe you reside in Suva, and if so, go pay the A-G a visit, he and PM are very accommodating and will no doubt talk to you about your concerns.

Please restate your remarks about what you believe the Attorney-General was implying when he made the statement in question.

I can assure you that he will say exactly what I mentioned.

Again, I say marijuana is a natural plant that is proven to be safer than licit drugs in alcohol and cigarettes.

Many countries have legalised marijuana to treat many diseases and conditions and also for recreational use.

Synthetic drug is chemically made in a lab and is not only dangerous but deadly.

No, marijuana is not necessarily a key issue and yes, we need to focus more on synthetic drugs!

MANY doctors are saying that they learned very little about nutrition during their studying days at medical school.

Now, we are seeing the growing number of physicians’ desire to understand the way food interacts with our biology because many of these physicians face limitations of drugs and surgery when treating lifestyle-related diseases that cause the most suffering today.

Most of the chronic diseases we have such as heart disease, diabetes, dementia, cancer and many more I believe are caused by food.

I believe these same diseases can be reversed by using food as medicine.

Hippocrates, the Greek physician who many considered as the father of modern-day Western medicine once said, “Let food be thy medicine and medicine be thy food”.

HUMAN and nature have been blamed for damage to our roads and infrastructure lately.

THIS is the umpteenth time regarding the conditions of the roads on Ovalau and the manner in which the same is maintained has been highlighted in this forum.

One just has to view the pictures posted on social media platforms to witness first, the horrific road conditions, and secondly, the paltry work conducted to rectify it.

Yes, Ovalau is only a stone’s throw from the mainland and the people of Ovalau certainly deserve more.

THE blokes Down Under and across the pond as well seem to be seriously confused.

Terrorist shooters and Israel Folau are both considered national threats in those places.

Folau’s so-called crime seems to be more serious than Tarrant’s.

This letter may not see daylight because of my support for Folau.

SO, Energy Fiji Ltd wants to raise its tariff rates per unit.

Isa, I remember when Monasavu was built.

That’s all I want to say.

WOULD have been more understandable if the Vomo St and M N Naidu Rd in Lautoka were fixed instead of constructing the footpath.

Now it’s a similar case with the Natabua Rd.

I WAS saddened to read that England’s most capped 7s player and one of their loyal and finest 7s stars James Rodwell will be hanging his boots at the end of the current season.

Having played 91 tournaments (2 more than NZ captain DJ Forbes) Rodwell has played an integral role for the England 7s team.

I’ll miss the red-haired Rodwell who has been playing on the circuit since 2008 for he was committed and passionate about playing 7s, which was at the heart of his thinking at all times!

MY only request to the Government in the next budget is please don’t go for the people’s pocket for any more money.

THE call to ban the sale of green yaqona by farmers on Taveuni is easier said than done.

I believe it is literally impossible to manage and police such a demand.

The problem needs to be dealt with at the source and that is to catch and charge the thieves with the toughest of penalties.

Some of the resources used to fight illicit drugs need to be diverted to fighting the licit drug in yaqona!

BURGLARY is a criminal activity which changes people’s lives in an instant.

People lose their valuables and some even lives.

Burglary is a cowardly act because burglars observe and wait for their moment before striking.

They form networks to pass information around.

It is for this reason we have been advised to be on the lookout for suspicious activities and people.

The difficulty is that they have motive and time to observe while we are engrossed in our daily activities.

As deterrents, we erect fences, keep dogs, have alarm systems and burglar bars.

They hang around for their chance.

For day robberies, they will wait for the house to be empty.

For night robberies, they will wait for the lights to go out.

This is an indication that everyone are off to bed.

It is a good practice to have exterior lights on.

It is an even better preposition to have an interior energy saver light on throughout the night.

This would tell lurking offenders that someone is awake.

Dim sleeping lights should be avoided.

Sometimes at night we are disturbed and we switch on the light.

This light should remain on until morning.

People should avoid disclosing holiday plans on social media and being on good terms with neighbours will not hurt.

A little bit of proactive approach will go a long way.

YOUNG Elijah Vosadina and Zimaran Kamea must be counting their lucky stars after they got the opportunity to be part of the touring Gallagher Chiefs who are bringing their game to Fiji for the fourth year in a row.

In 2016 and 2017, the Chiefs played the Crusaders while last year they played the Highlanders and from their three matches in Fiji, the Chiefs have won two and lost one and this year against the defending champions they will be out to get a win for their fans here.

Hence, young Tailevu lad Elijah was one of the winners of the Fiji Sports Council Chiefs for the day competition on Facebook and will meet the Chiefs upon their arrival in the Capital City while Kamea will watch his first Super Rugby match and tag along with the Chiefs during game time.

Lucky you, Elijah and Zimaran!