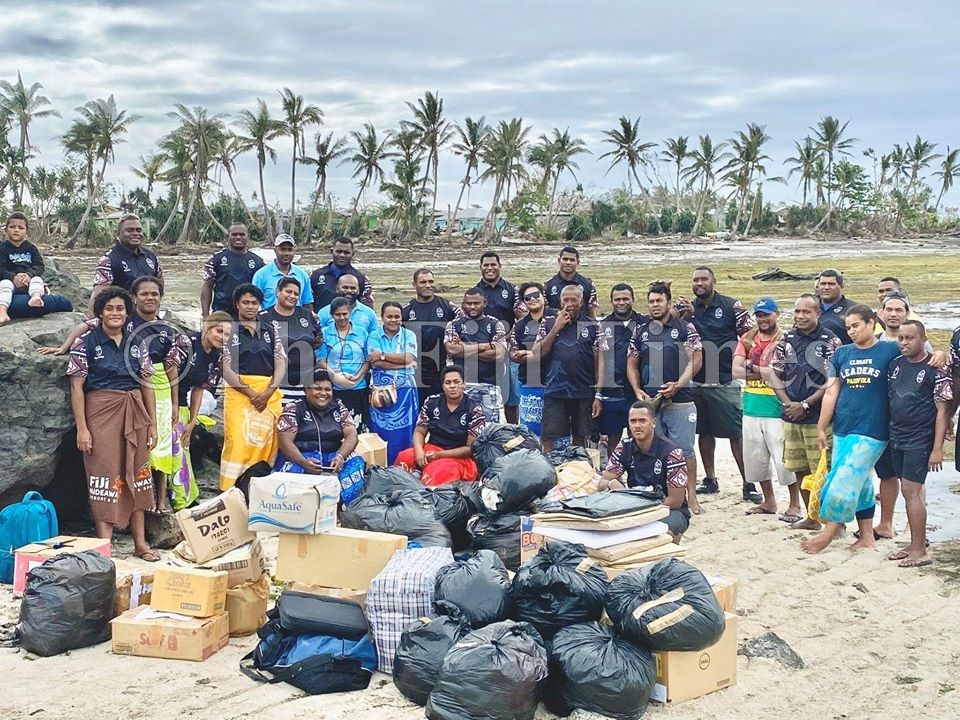 Members of the Hakwa Foundation on Vatulele Island. PHOTO: SUPPLIED

The Nadroga Rugby Union must be commended for reaching out to the villagers of Vatulele that were affected by TC Harold with supplies of clothing and groceries.

Nadroga Rugby Union has used this exercise as part of their team bonding and to visit the places that were affected by TC Harold.

It delighted me to read that assistance is part and parcel of Nadroga Rugby Union’s values and that the giants of Fiji rugby have planned further assistance to villagers in Lau and Kadavu affected by TC Harold.

A big vinaka vakalevu to Nadroga Rugby Union for this wonderful initiative!

Across all social media platforms there has just been one buzz for the past few weeks — TikTok vs YouTube.

I believe this buzz started in India and this is turning into a battle between fans of these two apps.

While “CarryMinati”, the Indian YouTube sensation, earning millions of fans worldwide for his direct and straightforward dialogues, TikTok lovers have had the completely opposite attitude towards it.

In my opinion, both apps have their own set of fans and is good in their own ways.

But I feel YouTube has been around for a lot more time and mostly has original contents available on it rather than most TikTok videos which use the sounds and voices of celebrities and movies and create a video of their own without giving credit to the original sound provider.

No offence but I would choose YouTube over TikTok any day!

While lately some spotlight has finally been on the accumulated Nasinu Town Council’s overdue rates, a growing fear of a new disaster in the making awaits.

I believe some rubbish on the roadside has not been cleared and piles of rubbish is seen along streets within the council’s parameter.

Who knows these piles of rubbish may be forming another set of viral disease which may be fatal for the dwellers and to the Central Division at large.

Therefore, urging all the relevant authorities (both in the local and central government) to take immediate action to avoid another disaster from happening.

The administrative matters of how to get the unpaid rates can be dealt with later, however, the rubbish must be collected as soon as possible.

Recently I watched the ABC Australia program on local or domestic tourism.

They showcased Tasmania as a local tourism destination in Australia.

One could fly by helicopter, travel by boat or drive inland with a tour guide to see the spectacular scenery, an old goldmine and dense beautiful forest.

I enjoyed the program and it got me thinking about Fiji.

We could also promote domestic tourism while waiting for the Australia-NZ bubble to include us.

There is the pool with red prawns on Vatulele, plus those calligraphic characters halfway down a 100-200 feet rock by the beach there.

Next is the calling of the turtles in Koro.

We should not forget the Wainunu dense forest with huge mahogany trees that need at least six people to hold hands around the trunk.

The Tagimoucia flower at Uluiqalau, Somosomo tells a story, followed by the Bouma Waterfall on Taveuni.

There is the river rafting in Navua and tracking up Namosi.

These are just a few of the places I know of, but there may be many more.

Strange that Ateca Ravai thinks that getting her one-year-old toddler to drink lemon-leaf tea is not as good as powdered milk (FT 21/05).

Giving lemon-leaf tea to your child is no problem at all and as a matter of fact it is a much more healthier option.

Ateca says she hopes things will get back to normal so that her children don’t suffer.

Lemon-leaf is what Fijians survived on before milk came along.

I am sure authorities have already started looking at reviewing insolvency laws to prevent struggling businesses from being forced to file for bankruptcy because of the COVID-19 pandemic.

On behalf of Lautoka Bus Stand market vendors, I would like to thank LCC for keeping the market clean at all times.

Special thanks to manager health for his quick response to our complaints.

Let me put it bluntly.

Police turning up at NFP president Mr Tikoduadua’s residence just after midnight to take him in for interrogation and detainment had nothing to do with maintaining public order in the country.

I believe it was a case of police harassment of an Opposition political leader. Fiji has returned to democracy.

And Tikoduadua’s court action against the police could help the police acquire a better understanding of its proper role in a democracy.

We will be lucky if we get to swim in that never-ending swimming pool before all our hair goes grey.

Another swimming pool elsewhere should be totally out of the question at the moment.

What if we get to know that another pool has a successful outcome while the western pool is still “in the pipeline?”

That pipeline surely can get displayed in the museum for reasons best known to some.

Fiji does not have to become a haven for criminal activities.

Can the Ministry of Fisheries do a survey and find out if the fish stock has gone up because of the ban during spawning?

I believe to call for inclusiveness is easy.

To be actually included will not be as Australia and NZ might help themselves first.

Sobo Dan, the pools are linked via pipeline.

Thank you to the Prime Minister and his entourage who visited Ekubu Village on Vatulele as was reported in the local newspapers yesterday (21/05).

The assistance has certainly been appreciated.

It has been noted that other assistance by Vatulele relatives and friends living away from the island flowed in as soon as it was safe to sail across from Korolevu.

Honourable Inosi Kuridrani also spearheaded some urgent and ongoing assistance and all this with the Government help add to rebuilding and restoring lives including shelter, water, food source and vegetation including forests.

I noted the mention of the contribution of seedlings of pine and mahogany from the Ministry of Forestry and I wondered whether seedlings of teak and yasi, and indigenous trees were not readily available.

It would be a great opportunity to replant Vatulele with indigenous trees including fruit trees and plenty of coconuts and seaside plants like dilo, tavola, evuevu, tatagia, vevedu, nawanawa and vesivesiwai.

Vatulele was chosen as the first island community to carry out the community workshops needed in the drafting of the first Fiji National Biodiversity Strategy Action Plan (FNBSAP) and is always of great interest to follow its development in that area.

Thank you for highlighting these in your reports.

I believe my favourite minister, honourable Reddy should revert to his previous portfolio (Minister for Waterways and Drains) where he executed his responsibilities quite well.

His worrying statement of not being bothered by sugarcane farmers switching to tobacco cultivation is “worrying” indeed.

I wonder if the learned minister realises the subsequent implications on our already fragile economy should sugar production come to a complete halt.

Besides, while the nation is vigorously advocating healthy living, why promote or encourage tobacco farming whereby this product, as statistically proven, kills thousands globally each year.

Ban it for a healthy Fiji!.

I believe the deduction of 67 cents by FSC from the cane farmers fourth cane payment was done without informing the farmers.

If the decision was made by the tribunal, then why were the cane farmers not informed?

I believe these type of issues discourage farmers to invest in sugarcane farms.

What will happen to the government’s guaranteed $85 per tonne sugar price?

Will it mean that the farmers will be paid 67 cents less when the last cane payment will made to complete the government’s guaranteed price of $85 per tonne.

I believe nobody can guarantee how much will be deducted again in the last cane payment.

I believe the Sugar Ministry should intervene now.

Were there any prior consultations done with the farmers?

I believe these type of issues discourage farmers’ confidence in the industry.

Sugarcane farmers are already facing so much hardship.

The recent cane payment was supposed to bring some relief to them, but instead I believe it put them in a state of confusion and worry.

Deduction of $0.67 from their hard earned income, which amounts to a significant figure in many cases, has really put them in confusion and worry.

I believe FSC should have prior consultations with farmers on such issues.

Hence, I believe refund of the above deduction be made to farmers soon.