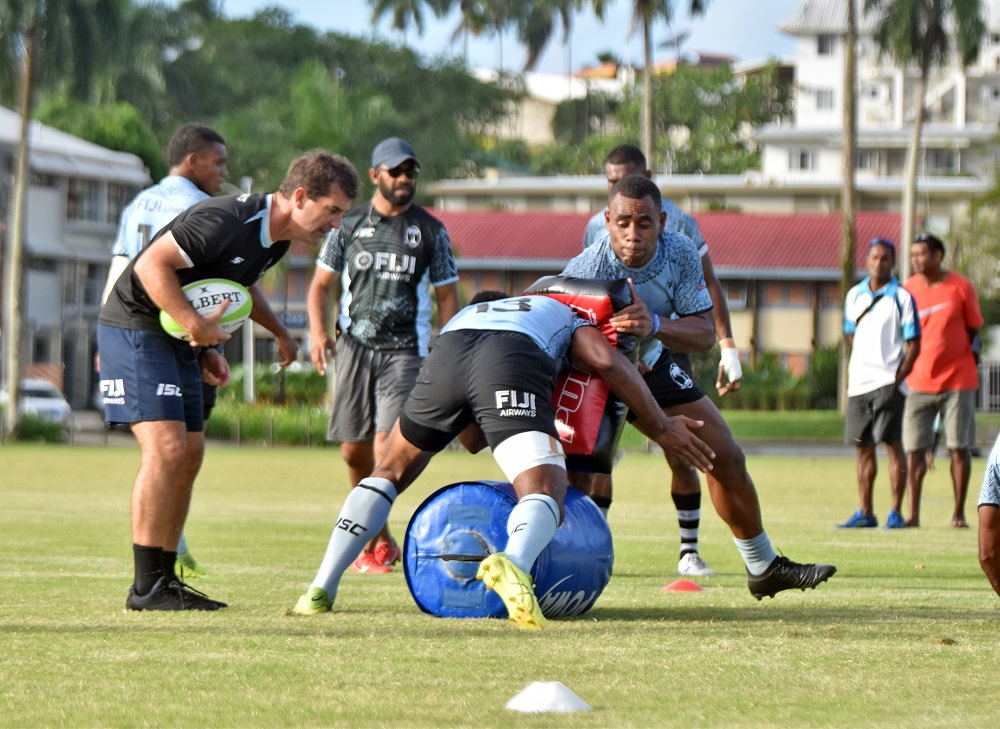 Fiji Airways Fiji sevens head coach Gareth Baber keeps a close eye on Livai Ikanikoda and other players during their training session at Albert Park in Suva on Wednesday, May 08, 2019. Picture: JONACANI LALAKOBAU

I agree with our captain that our off-load game is one of our major strengths that our opponents find hard to counter but Paula must know that heading to London and Paris our technologically-smart opponents would have analysed our game and worked out strategies to starve us possession and block our off-loads.

Time and again we have seen teams hold on to possession from the restart and once our boys don’t get hold of the ball, we lose our temperament and composure and start doing cynical things and end up in the “naughty chair”.

With two precious tournaments left, we have to win one and hope that the USA Eagles drop points in both.

Memories of the Paris 7s come to mind as I remember how we lost the crucial cup quarter-final to England who gifted the match to the Blitzboks as we bid the overall WRSS title goodbye.

I know Baber will want to end that disappointment this year and win his first WRSS title.

Police Commissioner Sitiveni Qiliho did not have too many words for our boys as he stressed the importance of discipline and the need to be good ambassadors.

Wow, seriously, well it’s a thought, but does it help stop the rising sea levels?

Come on, you can do better than that.

I invite you Mr Alexander to come to Fiji and I will personally drive you around to the villages that are affected by the rising sea levels.

So that you may see for yourself what the situation is.

It costs money – so could you ask the Australian government to give us the money to relocate the villages?

The recent FRA announcement of “No right turn” is great especially after the accident at Raiwasa a few years ago and turn at the junction is a no right turn entry today.

But my concern is the public living in the Nakasi to Nausori area for bus stops location and people living in the area to catch buses to travel the opposite direction they live in.

Some bus stops have been rebuilt far away from where they were previously located and have made it hard for the people in the area.

But hopefully, the FRA has the answers to these queries up their sleeves.

In regards to speeding and carelessness, the drivers that led to stoppage of night operation show the attitude in our drivers.

It is similar to the public awareness on stopping littering but people keep littering.

In this scenario drivers are often advised on work carried out for them to be more careful, respect the work being carried out and be patient, but they seem to ignore all this.

Similar works have been carried out in other areas before but after the completion, everyone seems to live happily ever after.

Come on Fiji drivers, we need to show respect.

Every now and then we hear of passengers and crew losing their lives in plane crashes.

I think air disasters are becoming more rampant and deadlier day by day.

I think, flight MH370 which is still very much fresh in our minds, was one of the most complex and horrifying plane crashes in recent times.

It was apparently one of those air disasters that captured the attention of the whole world.

I don’t think investigators have been able to bring full closure to the mishap.

I think unless the crashed aircraft body parts are found, no credible closure can be achieved.

The last we know of this crash is that the plane had fallen in the sea.

Just this week an aircraft caught fire which killed 41 people in Russia.

The report says that one of the five crew members and 40 of the 73 passengers on board the plane were killed.

I heard on television that the royal parents of the latest royal baby want to raise the boy in “a private and normal” way.

We can be rest assured that as part of his normal upbringing the boy will never need to face poverty of any kind.

He is born lucky.

Good luck to him!

It doesn’t come as a surprise that Solomons strikers — Suva’s Gagame Feni and Lautoka’s Benjamin Totori are in the race for the golden boot.

Wonder where are our Fijian strikers?

I totally feel sorry for Yeshnil Karan for missing the selection for the Pacific Games.

I know Karan would have made the cut if he was pushed by other runners.

Well, standard has been set and it seems the organisers can’t bend the standards.

Just wish to advise Mr Karan to concentrate on your study first before you enter any sort of sport.

Learn from previous students like you who are only used by sports administrators and dumped after reaching their expiry dates without gaining any academic qualification.

Good luck to you.

Fiji’s reach on the international stage is spanning.

Fiji is getting to host high profile international events.

Dignitaries and royals are making their way towards us.

Fiji is establishing ties with countries such as Georgia, Germany, Spain, Norway and others.

Fiji has carved a reputation on the competitive global podium.

The noise inside Anfield was deafening as Liverpool produced an incredible come back to thrash Barcelona 4-0 and complete one of Champions League’s greatest escapes by overturning a 3-0 first-leg deficit to power into their second consecutive Champions League final.

The world-class “Barca” players were totally rattled as Liverpool was absolutely brilliant and Barcelona was chaotic and catastrophic.

On the other hand, Spurs stunned Ajax at home 3-2 to reach the final.

It’s going to be an all English final in the Europa (Arsenal versus Chelsea) and in the Champions League (Spurs versus Liverpool).

I’m placing my bets on Liverpool and Chelsea to win.

Liverpool produced a stunning fightback against arguably one of the best soccer clubs on this planet.

A team which is supported so lovingly around the world, including Fijian fans, did it when the odds were stacked against them.

They were three goals down from the first leg and had to produce four of their own while conceding none.

It was against a team which carries the grace of some of the best players but Anfield’s rich history is second to none.

It was sheer belief from the players, Jurgen Klopp and the thousands of high voices with their red scarves and banners.

This victory has emulated some of the greatest performances of this famous club on their special ground.

Even without three key players from their starting line-up because of injuries including Salah, Keita and Firmino, the remaining showed the class of Liverpool.

The singing and celebrations continue for a few minutes after the match.

The red of Liverpool are on their way to the pinnacle of European club soccer.

In their way stands another English club, Tottenham which produced their own miracle.

In true Liverpool spirit “You will never walk alone”.

This season’s UEFA Champions League saw a host of comeback trails with the best just a couple of days ago.

Liverpool saw off an unstructured Barcelona outfit at Anfield to secure one of their greatest comebacks in history.

After being at Messi’s fingertips in the first leg going down 0-3, Jurgen Klopp’s men rekindled the legendary Liverpool spirit to claim a 4-3 aggregate victory.

Other remarkable comebacks this season saw Manchester United come back from a 0-2 home defeat to beat Paris Saint-Germain in their backyard 3-1 to secure a quarter-final berth.

Being laid with youngsters, Ajax looks to be the most promising squads of the generation.

They claimed an away 4-1 victory over defending champions Real Madrid and later beat Ronaldo’s Juventus also away from home and are now on course to reach the final.

Being a Manchester United fan these days is quite heartbreaking.

With the side out of Champions League action next season after missing out on a top four finish and losing out to Barcelona in the quarter-finals.

Ole Gunnar Solskjaer will have to spend big in the summer to build a champion United squad.

Let us hope for more of these magical European nights!

How dramatic can it get?

Never have I witnessed football at its absolute best after watching the two UEFA Champions League semi-finals.

Liverpool came from losing 0-3 in the first leg to down favourites Messi and his Barcelona team 4-0 in the second leg to qualify for the finals, and Tottenham Hotspur made up for their first leg 0-1 loss to come back from a 0-2 scoreline at the break and win it in dramatic fashion in the last minute of the game 3-2 and on aggregate 3-3 wining on away goals.

The two English teams staged brilliant semi-final comebacks to claim their place in the biggest match in European football which will be played at the Wanda Metropolitano Stadium in Madrid, Spain on June 1.

The emotional Spurs coach Mauricio Pochettino summed it all up when questioned about the semi-finals win “It is difficult to talk, thank you football, thank you”.