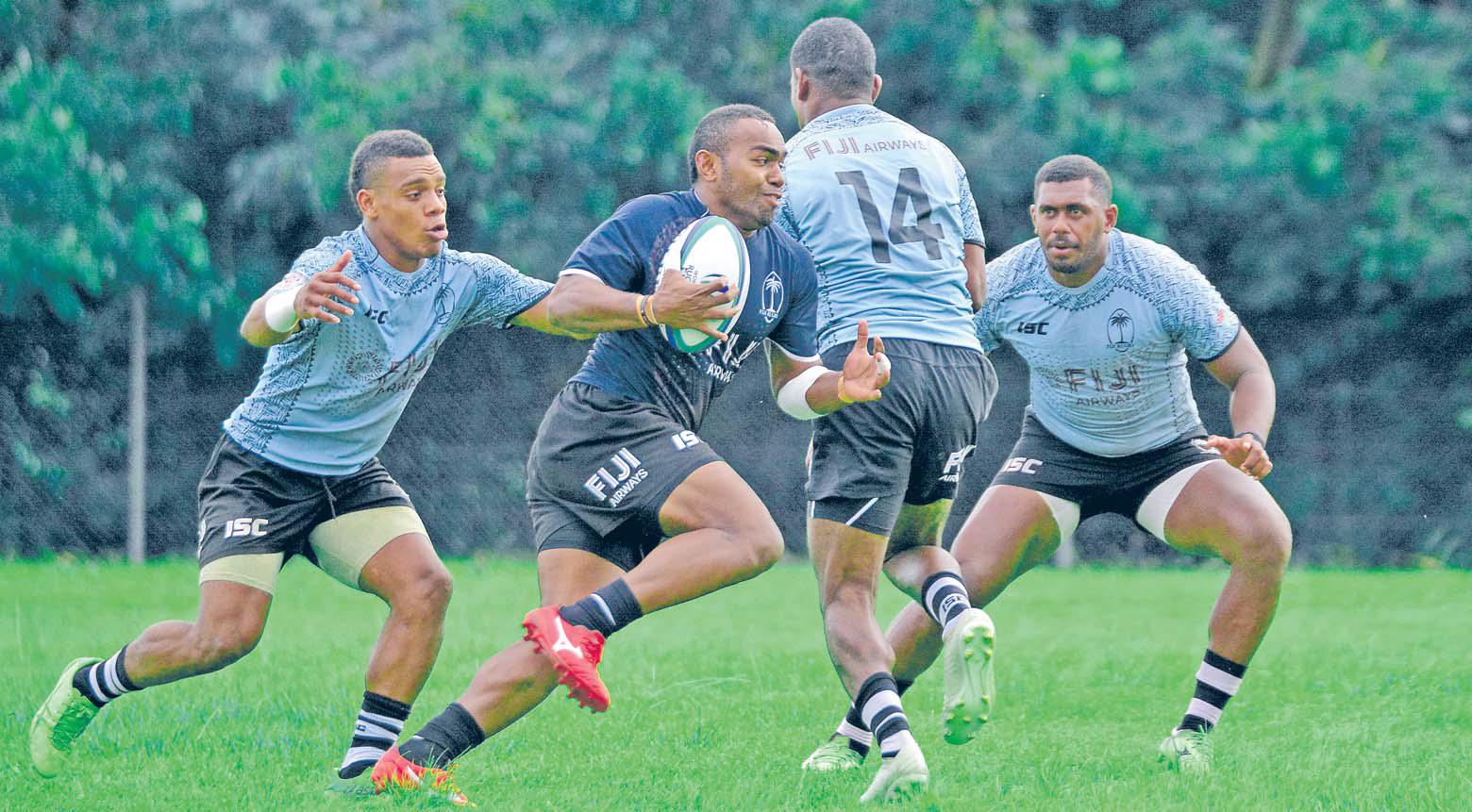 The playmaker’s role in a 7s team is critical and you cannot go far but understand the comments of our number one the wizard Serevi when he stressed how pivotal this position was.

We have lost Nasilasila and now Vatemo and there is some hope with Nacuqu coming back from injury.

That reminds us that we have only Ikanikoda and Napolioni Ratu in the mix.

Gareth has included Kurisaru and Luke the inform flyhalves to start a new combination.

The question remains, does Gareth have the time to blend from this mix and create a combo going into the series decider which is three weeks away now?

Why don’t we create the mix from within the existing team and keep our opposition guessing?

We don’t have the time to get players now, especially with the series on the line.

Jerry Tuwai started his journey as a playmaker and we have sharp and dynamite players like Terio Tamani and Alusio Naduva that can be nurtured at half back.

Something to think about, create a mana magic from your best 12 or 13 in place.

Only Fiji can do this for sure.

Start the talanoa and veilomani as Ratu Rayani always reminded us.

Fiji created shockwaves in London last year as Baber and our boys scooped their fifth tournament win, defeating South Africa 21-17 in the final.

This year in London our boys face Kenya, France and Samoa.

Our boys are three points behind the United States, who have made the semi-final in every round and look set to make another two semis.

We can hope and pray that the Eagles falter during the final two rounds and our boys can clinch either the London or Paris 7s and history shows that Fiji has never been able to defend the London 7s tournament.

We won our first tournament in 2006 defeating Samoa 54-14 and then lost the title to New Zealand the following year.

Fiji won in 2012 against Samoa 38-12 and then lost the title to NZ the following year. Ironically, we defeated Samoa in both our wins and lost the cup to the All Blacks the following year and the ABs have the best winning record of five tournament wins in London followed by England and Fiji with three wins each.

It’s time for action now and seeing Nacuqu back with the team boosts confidence.

Our boys need to deliver in London and Paris and get back the WRSS overall title (our last win dating back to 2016).

I am just being curious here.

Are the FRA (Fiji Roads Authority) personnel with their contractors also attending the “million dollars” ADB meeting on Denarau?

There doesn’t seem to be any activity on the Suva roads that are strewn with potholes.

The roads certainly need an urgent injection of millions too.

Also, the roads on Ovalau are in a pathetic state and the school second term resumes next week.

As a concerned member of a community and a citizen of this country, I would like to address the lack of interest of some parents and guardians for their children.

Some parents spend more time on their phones, with friends, kava sessions, yet, they don’t have time to pick their kids up from school or be with the kids to oversee their homework or to listen to their kids.

I believe this is the reason some children end up in accidents and/or mix with the wrong crowd.

We have teenage pregnancy, rape, missing children and so on that we can add.

Kids outgrow a toy and outfits, but they never outgrow time and love.

So, I urge all mature adults, parents and guardians to change their habits towards their kids.

Try and spend more time with the kids to know at which point they are in life.

Be ready to pick them from school before class ends in a day.

The little ways we show them that we care are the ones that will matter to them.

I applaud the parents, guardians, teachers, school administrators and former scholars for their contribution to the successful management of their respective school teams who congregated at the 2019 Coca-Cola Games that was held at the ANZ Stadium in Suva.

I would like to encourage the wider community through church groups, youth groups, the Ministry of Youth and Sports, the Department of Heritage and Arts through the Ministry of Education and grassroot community-based groups to create activities for school kids during the school holidays.

If we can create more sporting clinics and encourage our kids to engage in them, then we would see a decrease in unproductive “roaming” around which creates room for potential bad decisions and more often than not, made through peer pressure.

Fun and engaging activities can also be facilitated by the art and cultural institutions to reinforce the importance of the two industries in the midst of a growing competitive job market.

We should start empowering our kids to be more self-sustaining and entrepreneurial in the way they think and engage on a daily basis.

If more opportunities of self and communal development are provided to kids during the school holidays that are entertaining and educational, then values like determination, fairness, friendships, kindness, happiness, achievement, compassion, citizenship and the overall sense of community will be reiterated and validated.

Along with these, kids will learn the importance of time, safeguarding relationships among fellow Fijians and our relationship with our environment/land or vanua.

If the excessive police presence subsides after the ADB (Asian Development Bank) conference, I’d judge that it was solely for the high-profile guests.

I’d deduce that it was to subdue external threats, if any arose.

I’d conclude with the assurance that Fiji is a safe and beautiful country.

A report in one of the dailies had the headline as stated by the governor of the Reserve Bank of Fiji.

Just a pretty quick response to the editorial comment (FT 02/05), we already know.

Our boys will then face the hosts Lautoka and underdogs Tavua, who beat Labasa 2-1 at Subrail Park.

On paper, Labasa has the hearts and fame that can win this year’s tournament.

The likes of Qase, Mateisuva, Kubu, Gonerau, Lolaivalu, Raju, Dan, Logaivou, Toni, Karan, Mereke and Solomon Islander Dunstan will lead the red brigades for a spot in the semis and I wish our northern bullets all the best for the three-day battle in the Sugar City!

Congratulations to The Fiji Times eyewitness (Tuesday 30/04) who correctly identified Princes Rd: whereas the road sign in the photograph clearly reads Princess Rd, which is wrong.

Princes Rd was named for the five princes in Queen Victoria’s life.

Prince Albert, her husband and her sons: Albert, Prince of Wales (known as Bertie) who later ruled as Edward VII – Alfred, Arthur, and Leopold.

And perhaps the spelling of Panaromic Rd (which must give tourists a good laugh) could be corrected to read Panoramic Rd?

In Fiji, the main roads are now the new off-roads.

The only road leading to the area of needs is usually blocked because of landslides on Wailoku Rd.

The question that I raise is what would happen if a pregnant woman needs to rush to the hospital?

Has anyone of us thought around this concern?

Simply, during any sort of emergencies where will the people of Wailoku search for an alternative road?

Obviously, this is not something new as FRA and government are very well aware but has anything been done to address this issue?

Please let’s not just clear the road after 24 hours of complaints and forget about it.

Let’s work collaboratively to build solutions and step up to construct an alternative route.

Here we are, divided people over the governing of the nation!

While FijiFirst has won the past two elections and have the mandate of the majority of Fijians, a good number of people have gone against the ruling party and voted for the predominantly iTaukei party in SODELPA, and they have found themselves in the Opposition.

While the Opposition plays an important role in providing practical criticism of the ruling party, it is very important that Opposition party work in co-operation with the ruling FijiFirst Government for the development of the nation.

After all, it is the nation that is most important and not the Opposition, nor the ruling party!

One of the only things that the Opposition party and the ruling party have agreed upon unopposed is the increase of their salaries and allowances.

Besides that approval, the Opposition has hardly co-operated nor agreed on anything else.

It begs to seriously question what their real motives are?

One thing we now see between the FijiFirst Government and the Opposition party in SODELPA is that the line between them has become very thin and is becoming thinner and thinner by the day.

The same can be said between the two opposing supporters as seen and read on social media.

The divide is not only unfortunate but it brings to question each and every one of us on what are we trying to achieve here?

FijiFirst is the ruling party and they are because the majority of Fijians want it that way, so it is only appropriate that the Opposition and its supporters swallow their pride and for the sake of the nation, work together for the betterment of all.

We cannot be disagreeing with everything!

There is so much unnecessary hatred and dislikes between the two parties that we have lost focus on what is really at stake and what matters most of all.

As a developing country we sure cannot afford nor have the time to continue to be disruptive and unproductive.

Co-operation is the key to our success and it needs to be a nationwide one!

The use of violence against children has become quite a concerning factor in today’s society.

The most annoying part is that children nowadays are not beaten or scolded because of indiscipline hence they become the victims of adult violence and further, their pressure is being released on children.

I believe child abuse is already one of the greatest abuse faced by the community because of adult violence, the children’s threat level is increasing.

Because of this, children are not able to concentrate on their school work and at the age where their mind should be fresh and playful, they become stressed.

We should take this seriously and see where our children’s future is going and together we can provide children a better, secure and protected environment to live in since they are our “shoulders” in the future.