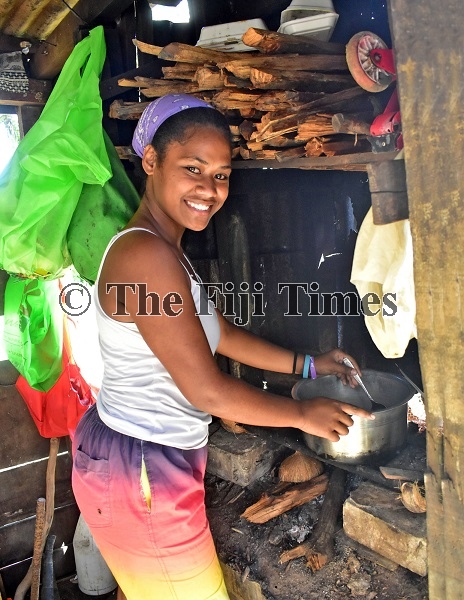 Another powerful story on self resilience and sacrifice by Salanieta Volavola to shelve her career dreams and look after her siblings.

The smile on her face and picture is truly poetry in motion. How many more living and breathing cases we have in our Viti the way the world should see.

Vinaka Viti Times, apart from politics, sports and other readings, we continue to read hardships and real life stories of individuals and families and this surely makes us stronger and more resilient to face the realities of life and never lose hope day in day out.

Kaukauwa dina only in Viti Times the way the world should see. Will wait for tomorrow’s (today) edition for another powerful story.

I was shattered upon learning that Salanieta Volavola had to give up on her dream of becoming a chef to meet the needs of her siblings after her mother abandoned her family and her father was handed a 10-year jail term (FT 09/07).

Sala had to quit her Year 12 studies as she had to do odd jobs to earn enough and look after her siblings.

Sala had planned to pursue studies at FNU but had to shelve her plans as the responsibility of looking after those younger than her fell on her shoulders.

According to Sala her siblings were always her motivation to work hard.

However, her dream to become a prominent chef remained.

It’s pleasing to note, on the other hand, that she decided to sacrifice her future to ensure that her siblings would have a good future — such a thoughtful act!

I salute you Sala for your unconditional and unwavering love and support and I’m adamant you’ll soon fulfil your dream and attain success.

Sala, you are a role model for many of our brothers and sisters!

I salute TISI for the initiative of providing free lunch to the students attending schools managed by it.

The administrators of Sangam are true champions in terms of enabling their students with the nutrients they need to learn while at school.

What a deed indeed! Other organisations which have similar thoughts are also being saluted for taking up this noble initiative.

I know our religious and social organisations have the heart to bring up such highly beneficial projects to cater for our little ones at school.

With assistance from the Government and additional assistance in such forms by our religious and social organisations, the onus rests on our children to perform.

They have to be vigilant in the way forward in their educational voyage.

Parents please be thankful for such assistance, reduce any negativity and move on with positivity for the sake of our children. God bless all our noble institutions.

Interestingly, Supervisor of Elections Mohammed Saneem, while lifting of the suspension of SODELPA, noted from the SODELPA constitution that the party’s annual general meeting was to be held no later than June 30 every year (FT 07/07).

More interestingly and by contrast, the FijiFirst party constitution sets no calendar date for a “FijiFirst Congress”; in fact no annual meeting date is fixed.

All it says is that “the general secretary shall inform the members in writing of the date fixed for the FijiFirst Congress and draw attention to the procedure for meetings.” (FijiFirst constitution p12).

This political party runs in a top-down manner, unlike SODELPA which has to abide by procedures set to be followed.

I see the current division among members of SODELPA demonstrating that democracy is at work.

Living in the Sugar City where I had the privilege of everything that anyone wants is something that some village children can only dream about which is a reality.

Children without shoes and wearing old clothes live happily without complaining about any hardship.

They eat whatever is grown locally, fish, swim in the cool river and they don’t need to swim to cool down.

The main thing is the people who are so happy in everything they do together.

The teamwork is something that the people in authority can learn from.

I am sure the people in authority can learn a lot if they spend a month experiencing village life.

The real experience of living like a common person might bring a life changing experience on many people who take everything for granted.

Further to my letter (FT 08/07) I suggest that Jan Nissar of Sydney, Australia write in to the chairman, president or CEO of Fiji Rugby Union expressing that the “gods” have answered his thoughts of cancelling his so-called Mickey Mouse 7s tournaments for the rest of the year.

More so, that the Olympics be taken out as well. Better still, try and liaise with our current national 7s coach Gareth Baber or his predecessor Ben Ryan who brought Olympics gold to our tiny nation called Fiji, thus creating history for our successful rugby mad nation.

In Fiji, we don’t leave your so-called 7- minute to little boys and girls, their top priority is education. Once again you are just full of talk and hand wash.

Dan Urai would have replied to you in a sentence or two, mine is just two words to you — “shut up”.

In the meantime, just adhere to your government’s COVID-19 restrictions and enjoy the bitter cold Sydney winter.

So Sukha Singh and Simon Hazelman have received responses to their queries from the special administrators.

What about us in Lautoka, we have also queried many things via the Letters to the Editor column, we only get silence from the SAs.

I believe the Northern SAs have class.

Based on mainstream media reports about the issues surrounding SODELPA, it appears that the former prime minister and current SODELPA leader is confused.

Patiently expecting a response from the good guys at Lautoka City Council or whoever is in authority regarding my “cone” query (FT 07/07).

Or should I start throwing those cones back at the shop owners? We pay for parking.

Could FCCC also check prices at flea markets, as I can see prices are fluctuating every week.

Or is our dollar being devalued?

I’ve only just watched an interesting documentary titled, All Governments Lie! And then the thought occurred to me — it doesn’t matter which country we live in — our parliaments are made up of imperfect people just like you and me!

How many rivers do we have to cross before we can talk to the boss?

Every time I plant a seed, he says kill it before it grows.

You can fool some people some time. So then we cook cornmeal porridge, I seh, of which I’ll share with you. My feet, my only carriage, so I’ve got to push on through.

I hope in future no village is located near the sea or rivers.

It’s so much of a burden on the government to relocate or keep providing assistance.

If majority of the money is spent on this, including cyclones then where and when the Government will have money to do other developments?

I believe we make our government run dry of money.

Too much assistance and spoon-feeding.

It must stop somewhere. People are over reliant on our good government.

To our good PM and A-G, stop this please.