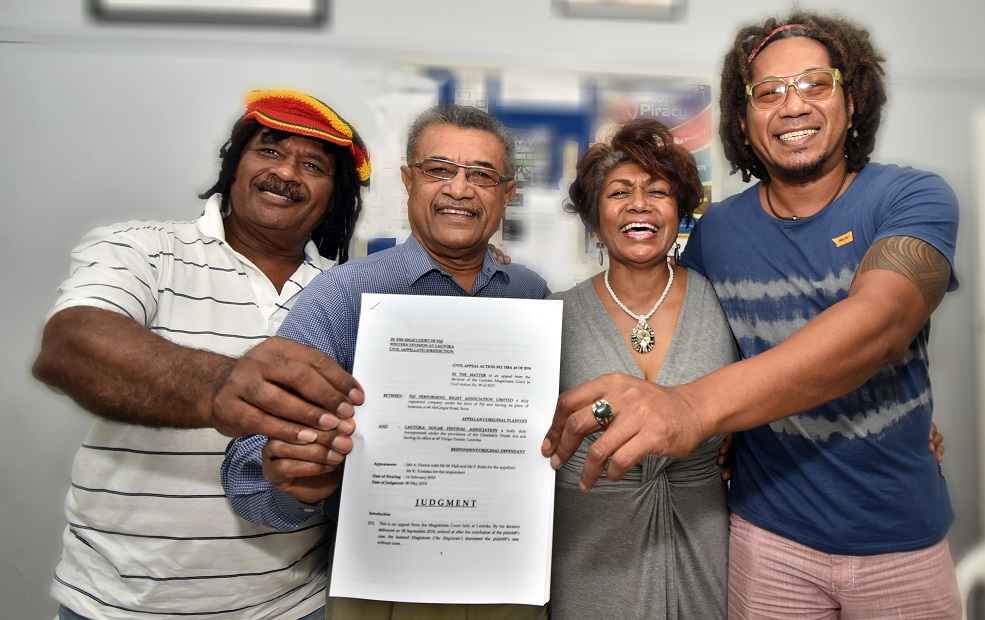 Very pleasing to note a recent court decision where music royalties were awarded to Fiji musicians.

If these laws are applicable to the very noisy shops in Tavua which blast probably pirated music and videos all day long, can somebody with the applicable authority get them to shut up.

I live nearly a kilometre from them and can hear them clearly at times.

SATURDAY’s Farebother challenge will be a beacon of hope for the Stallions.

The trophy cabinet in Nakuruvarua is empty and this hurts!

The Stallions lost the Farebrother title last year and now have twice lost to Suva in the final of the Skipper Cup.

Last Saturday, Nadi surprised many delivering a vibrant performance to melt Naitasiri hearts and stole the cup from the Highlanders.

Nadi thrashed the Stallions (40-18) in the Skipper Cup battle in round one at Lawaqa Park and this time around Nadroga must give the Jets a taste of their own medicine.

To Nauga, Matawalu and the Stallions – I leave you with the words of Crusaders warrior Jordan Taufua, “No matter how you feel, get up, show up and never give up”.

To follow up your “Fire safety a priority” editorial of July 3, could The Fiji Times obtain a homeowner’s self-inspection checklist from the National Fire Authority (NFA)?

The NFA conducts annual inspection of commercial, industrial and public buildings as required for renewal of business licences.

Annual NFA inspection of all structures in Fiji may not be feasible but homeowners should be encouraged to conduct self-inspection of their dwellings as per NFA guidelines.

Means of egress in case of fire is of paramount importance.

It is horrible to occasionally read here about people trapped by burglar grilles inside burning houses of simple construction where a small inward opening escape hatch at ground level could save lives.

There are periodic updates in The Fiji Times about crime statistics.

Some criminal activities are reported to be committed under the influence of alcohol.

Drugs have become a huge problem as well.

Possession, growth and selling of drugs are criminal offences itself.

With the high prevalence of drugs in Fiji, just like alcohol induces criminal activities, do we know how many of these criminal offences such as burglaries and murders arise because the perpetrators are drug users?

While alcohol-related criminal offences can be easily detected, do we need to carry out drug tests on perpetrators?

Drugs in Fiji could be a bigger menace than what we are perceiving.

Every year, a large number of people die in road accidents.

I think it is one of the biggest causes of unnatural deaths in our country.

People are reported dead because of road accidents every month.

Actually, the number of people dying on our roads doesn’t seem to be coming down.

This should be a cause for alarm for those who value and care for people’s lives.

As we know through statistics that most accidents happen through reckless and drink-driving.

Speeding, jumping red lights, overtaking from the wrong side are but a few breaches that are witnessed on a daily basis.

I think this would not be the case if those caught breaking the road rules were punished harshly and without any second thought.

I believe the problem is no one is policing and enforcing the rules strictly and promptly.

We develop many good rules but they make no difference.

It is about time our law and order agents put their acts together to make people’s lives better and safer.

Lautoka is missing such an important part of keeping fit, regular exercise, and buildup for sports personal in the Western Division.

The Lautoka Rugby Union hardly has a place for their weights and strengthening program and I heard that the coach Iferemi Rawaqa uses his personal equipment to get the team going.

To play professional rugby nowadays a gym is a vital component in getting a team prepared.

An ideal venue for a gym for Lautoka would be behind the wooden grandstand at Churchill Park which still has a small shack house for referees to gear up for a game.

A gym with a new referees’ change room would be perfect.

Hopefully, someone will look into this very seriously and with a fee for its usage it would be more appropriate.

India joined Australia in the WC Cricket semis after ambushing past Bangladesh.

Congratulations to India for the hard-fought win as we look forward to a repeat clash against England in the semis!

What does it tell us, when high school students state “I feel we’re slowly tearing ourselves apart” and then later asks “if it’ll be good to be ceded back to Great Britain” tsk tsk, our kids are worried, if this is the topic of discussions.

The safety of seafarers is paramount.

A “no-brainer” without actually uttering it, would not you say so?

Of the utmost important as it is, but of course the paramount safety of …ummm… “the paramount” should also be of utmost ..lo and behold… paramount.

Have a great weekend folks.

So the North Korean dictator Kim Jong Un and the American President Donald Trump have had a “historic meeting” and they can strut about like peacocks but what has changed and is likely to change following this “landmark event”?

I believe Suresh Chand (FT 2/7) is no expert hence his premature congratulations to Trump.

Our flag-bearer to the Pacific Games Roy Krishna looked confident as he shook hands with President Jioji Konrote (F/T 04/07).

It’s a proud moment that Roy has been given the opportunity to carry our flag in Samoa.

His achievement I hope will boost our soccer team which has been making headlines for obvious reasons and will face a mammoth task to win gold.

Finally, thank you The Fiji Times for the Pacific Games guide which makes it easy for readers to get in touch with the events taking place in Samoa!

Thank you Simon Hazelman for your interesting letter about your case with FICAC.

So Simon gets the brunt of an allegation and the “alligator” goes scot free?

How fair is the law here?

Simon gets dragged through the issue and when found innocent and he asks for the source FICAC says the source is protected?

Sometimes I wonder if we live under lopsided conditions.

I refer to the letter written in The Fiji Times (4/7) by Simon Hazelman of Savusavu regarding investigations by FICAC in his financial matters.

When I had officially given a written complaint about the abuse of funds in a prominent sports organisation,with evidence, I was told that FICAC only deals with matters where government funds are concerned.

So how come a common citizen is investigated by FICAC with the embarrassment they caused to him and his family?

Who will pay for all these?

It’s time for FICAC to wake up and stop harassing our citizens.

Do not expect reward

To the president of the PYGMIES group and all alike… it was quite annoying and very much disturbing reading your article in the other newspaper on April 24 titled ‘PYGMIES group help feed the homeless’.

What you have been lamenting about the homeless street-kids is exactly what each and everyone going through the mill experiences daily, according to choices made in relation to circumstances.

One has to rule or have dominion over thee.

I believe you do seek financial assistance from the government of the day, which already has enough on its plate for people like you and me.

The only question is “what can capable people like us do to the needy?”

Please if you want to help them, just do it with love and compassion but do not expect any reward or seek financial assistance.

Instead of giving your all, you give nothing, but take it all back by asking the government instead of asking the ‘one’ you giving it to, don’t you think?

Each a disgrace in the spiritual realm of our daily walk with God…you don’t have to feel or see or touch, you just have to acknowledge his omni presence, amen!

Why look for the living among the dead?