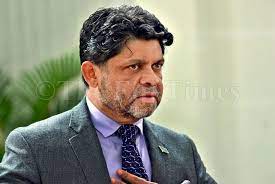 I WOULD like to differ from the Attorney-General and Minister for Economy Aiyaz Sayed-Khaiyum when he said that skilled workers had left the country because of the shortage of a skilled workforce in Australia and New Zealand (FT 28/06).

According to some skilled workers whom I have heard from, like teachers and nurses, they are leaving because the work environment in Fiji with the current Government is not conducive, hence, I find the comment by the Attorney-General very misleading.

He further said that many people were living and the Government’s goal was to see how they could make it even more attractive so that our people could stay here.

How can the A-G and the FijiFirst Government make it look attractive when they are the ones who made it unattractive at the first place?

In addition, the A-G said because of the gap left by these skilled workers who had left, the Government is improving civil service terms and conditions.

Well, according to many civil servants whom I have contact with, they think otherwise.

Many voiced that the civil service terms and conditions set by the FijiFirst Government are deteriorating and stressful, therefore, many are living to seek employment overseas.

Health research shows income, race and ethnicity, and education affects the extent to which diseases such as asthma, diabetes, hypertension, obesity and heart disease prevail in communities.

In Fiji, diabetes and high blood pressure as well as suicides were especially prevalent among Fijians of Indian descent.

Over the past four decades, the cases of type 2 diabetes and high blood pressure, as well as suicides have increased among the iTaukei.

The management of diabetes is critical for those afflicted by this insidious disease.

This too has an ethnic dimension in many countries including our own.

At a recent Burns Unit workshop, critical findings based on primary research were shared regarding the prevalence of injuries from burns at home, the prevention of burn injuries and deaths, as well as immediate and longer term treatment of such injuries.

It was also shared that ethnic patterns are to be seen in burn incidents, injuries and deaths.

iTaukei children are more likely to be victims of burning incidents, and among adults, Fijians of Indian descent.

It was revealed that Fijian women of Indian descent faced high risk from “self-inflicted burns as a consequence of conflict situations”.

This observation brought together issues of domestic gender-based violence, self harm and suicide in this vulnerable group.

However, the media coverage of this significant workshop paper has abruptly ceased, why?

PROPAGANDA is not a way to treat and shame a soul for we are all under the same roof.

Don’t let the political system pull you down for the ladder has two ways.

Get on top of our head for shame is near when pride override a man’s heart, but honour shall uphold the humble in spirit.

Nothing compares when we are humble and sincere.

May you all have a wonderful and serene weekend.

I WISH to acknowledge our beloved prime minister for devotedly attending and representing Fiji at the 2022 Ocean Conference in Portugal.

Just a courtesy reminder Mr Bainimarama, please keep your trusted iPad handy in case a foreign journalist startles you out of the blue and attempts to interview you on live television.

We certainly do not want to see a repeat of that embarrassing episode in Glasgow last year where you had to persistently refer to your electronic gadget while responding to modest questions regarding climate change posed by a journo.

You are one of the “cleverest” PMs in history to govern Fiji and I wish you all luck in the upcoming election.

Can you also please bring back some chocolates from Portugal?

Calm before the storm

The Flying Fijians looked in a relaxed mood prior to the rugged battle against the Ikale Tahi tomorrow afternoon in the Capital City.

In a surprising move, Cotter opted for Tela ahead of the experienced Ben Volavola who has been donning the number 10 jumper.

The Tongans will be backed by their vocal supporters and with the likes of Folau, Fekitoa and Piutau.

Expect a fiery battle when the two sides battle in the heart of Fiji.

BIT of a relief with the price decrease in cooking gas.

Not so much for vehicle owners.

NEXT time our government ministers and Opposition politicians address the public, can they carry a mirror with them so when they speak, they can also look at themselves in the mirror while speaking.

Reality we can’t just drift away from, deeds not words.

That’s how the Taliban have been operating since their takeover in Afghanistan.

Their latest move is for women television journalists to cover their face and no more music to be played.

One renowned journalist said they were made to feel “not human”.

What a crying shame!

What a diabolical regime?

IF consumer spending keeps the wheels of the economy rolling, how do they claim economic growth when consumers’ spending is limited.

SO now there could be a complaint against the complainant.

That would be a sure shot surprise.

No tap, no travel

YESTERDAY, I was a bit saddened to read about the incident that happened with those two schoolchildren.

I understand that compassion and humanity should have prevailed from the driver’s side, but the rule stops drivers from doing it.

No driver wants to be fined by the concerned authority.

The system should be relooked at and at least the drivers are not dragged in such matters where they are following the law.

They have to deal with their bread and butter first.

HOW wonderful it is to see our roads being upgraded all around.

Wouldn’t it be wonderful if it was being taken care of throughout and not just when election is looming around.

Can the upgrading be avoided during day time when it’s busy?

When will we have quality materials for our roads which can help in upgrading once in a while for long period of time?

AS people become more glued to their screens, the line between, the virtual world and reality, is becoming more and more confusing, with the exponential growth in technology.

Sometimes it’s hard to tell the difference, between truth and the fakery out there.

The confusion was also there back in the day, but not as instant and insidious, as it is today.

Coz, everything is now at your fingertips, from the printed words and audio-visual, to the stills and the video pictures.

With the “internet of everything,” it’s now up to each one of us, how we discern things.

ANDREWS Rd in Nadi, where I live, has no drainage therefore sections of the road become waterlogged when it rains.

The water stays until it gets spilled over by the passing vehicles or dries up naturally.

In the meantime, pedestrians are left to walk through the waterlogged road as there is no footpath also.

Actually, footpaths are in short supply across the whole town boundary.

It is suggested that part of the rates collected from the ratepayers every year be utilised to build the missing footpaths as we’ve come a long way since Nadi was declared a township.

I know there are good people in the council who would try to fix the problems I’ve highlighted.

I do not expect the council to tell me to go here or there as I pay rates to the council.

Accordingly, I request the council to look at the drainage and footpath issues that I’ve just raised.

CAN the Government locate all the unemployed people and those without smartphones and give this $100 help on a monthly basis.

I am not referring to people on the social welfare benefit.

Could the Government tell us why their travelling allowance is so high?