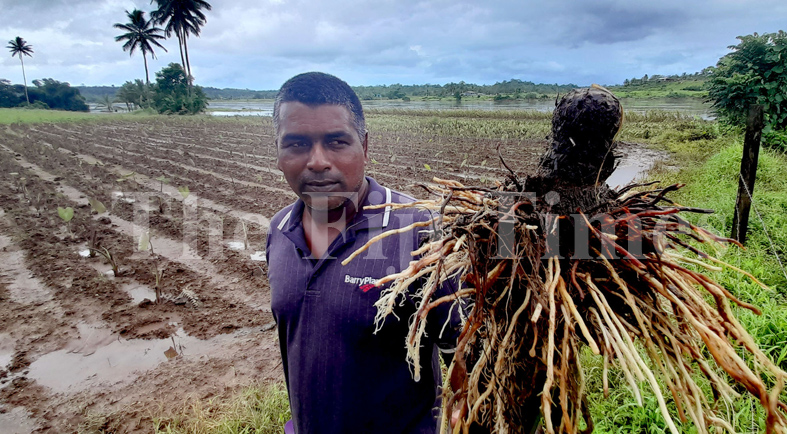 Farmer Pravin Raj shows the damage of dalo crop during the flood in his farm at Baulevu. Picture: RAMA

More pictures of devastation and destruction in The Fiji Times. Farms have been damaged so Fijians can expect a rise in the price of vegetables and root crops.

Vendors are worried over shortage and the prices. Fijians have been warned of the possibility of an increase in diseases.

With the impact of the flood, Fijians have sustained damage, and many will be hoping for some form of assistance (even from their own FNPF) to re-build lives.

Fijians have been affected mentally and financially. I hope some form of psychosocial support will be provided to families, especially children, affected by the recent disaster.

Families had been challenged and mentally affected by the pandemic, and now flooding at the dawn of 2022.

I’m also interested in data (if we have any) of Fijians who were provided any form of psychosocial and counselling support in the aftermath of the past floods and tropical cyclones since providing psychosocial support will encourage positive recovery and strengthen the ability of individuals to deal with challenges in future.

It will facilitate and enhance resilience within individuals, families and communities.

Hence, apart from providing financial assistance, psychosocial and counselling support to the affected is a must!

We appear to be making lots of assumptions and sweeping statements based on a poll that is running each month.

Polls, or generally known as opinion polls, is a human research survey of public opinion based on a sample. Which begs the question: when things are static; no one is campaigning, what is in the sample on which we solicit the opinion of the public?

For now, with nothing substantive in the sample, all we have is name recognition and no two names are more recognised than Bainimarama and Rabuka, hence the high scores that accrue to them.

It’s different when things are in motion during campaigns, where the sample can reflect the interest of the public in what a politician stands for. What are their policies? How well do they articulate them and defend them? Did they have any failed policies? Have they promised something and didn’t deliver?

Is there baggage that can hold them hostage to a particular group?

The campaign period is when polls are interesting and meaningful, otherwise for now, polls are just about who is best recognised and that don’t translate to votes.

With things being static, let’s not be carried away by the polling we have today. Viliame Gavoka SODELPA leader

Just grab a copy of the current FijiFirst donor listing and not surprisingly, majority of the contributors registered are elite businessmen and their influential cronies, hence branding FijiFirst a rich man’s party. I believe opulent entrepreneurs would naturally financially back the government of the day to further propel and safeguard their own personal and business interests.

I hope you have observed the increased number of millionaires that have mushroomed in Fiji since the illegal military coup of 2006.

Should there be a change of guard in the upcoming elections, I believe these would be the same privileged society who would swiftly jump canoes and throw their support behind (and boot lick) the next ruling party.

This how the political landscape in Fiji operates I presume. By the way, whatever happened to those tax evading businessmen who allegedly financed the 2000 coup?

Can investigators shed some light on this? Nishant Singh Lautoka

America’s gun violence epidemic is killing more children than ever. In 2021, two sisters in Ohio, both in elementary school, were shot by their father. A boy in Texas was shot at home by someone in a passing car. A ninth-grader in Arkansas was shot at school by a friend. A girl in Kansas was shot by a toddler, who didn’t mean to do it.

A teenager in South Carolina shot himself, but he did mean to do it. All of them were killed in an epidemic unique to the United States, where, on average, at least one child is shot every hour of every day. Many survive, but many others do not. In the nation’s capital, nine children were killed in gun homicides last year.

In Los Angeles, 11 were fatally shot. In Philadelphia: 36. In Chicago: 59. Those figures don’t include the hundreds of other kids who died in accidental shootings and by suicide. Just how many were taken by gun violence last year will remain unknown until the Centres for Disease Control and Prevention releases its data months from now.

Even babies are shot to death, but the vast majority of young victims are teenagers. Black kids are more than four times as likely to die in shootings as White ones though White kids are much more likely to use guns to take their own lives. In spite of this, the people who believe in the right to bear arms are a powerful group and the government seems to be powerless to do anything.

I believe the US seems to be headed the same way. And the needless deaths of the children from gun violence is just one of the many symptoms. So despite all the problems we have in Fiji, we should be grateful that we are safe from gun violence. Arvind Mani Nadi

I fully agree with Satish Nakched (FT 8/1) that a lot more needs to be done to improve the accessibility of people with disabilities in public transportation.

Although the necessary legislation is in place, we are still lagging behind other countries in actually implementing these provisions to make life better for these marginalised members of our community. The delay could be attributed to lack of priority being accorded in this area.

Like Satish, I also believe that it’s time to walk the talk. To accelerate the process. What we need is an action plan with clear implementation timelines and milestones.

Only then changes will be materialised. Otherwise we will be still talking till the cows come home.

I also suggest that in order to encourage local construction of disabled friendly vehicles, tax rebates should be granted to the builders and special subsidies should be considered for the bus operators. SELWA NANDAN Lautoka

I wonder how many people’s electrical gadgets have gone bad because of power fluctuations. Allen Lockington Kava Place, Lautoka

With the recent flooding in mind, would you still remember from your childhood days the unique smell of soil when a few drops of rain came down after a dry spell which was followed by an urge to sneak out and enjoy a “secret quickie”?

Even a step ahead, “some” was collected and hidden somewhere inside the house for a “snack” later sometime. Mohammed Imraz Janif Natabua, Lautoka

The Ministry of Waterways should take dredging and wall maintenance of creeks and rivers more seriously.

The flooding exposed a lot of loopholes with dredging. So many riverbanks are being washed away because of the authority’s inability to erect walls on riverbanks.

People who are criticising the PM and the A-G, his right-hand man, for missing in action in time of national crisis (FT 12/1) forget that our honourable leaders travel far and wide — with a big Fiji delegation — to address global crisis such as climate change on the world stage.

What more can the people of Fiji want from their political top dogs? Rajend Naidu Sydney, Australia

Thank you for the information so far. Please highlight what are you planning to do for the teachers in addressing COVID-19.

Are you planning to give any of your facilities for any isolation or vaccination program for teachers? Or do you have any program at all?

Expect an increase in prices of vegetables and root crops following the flood in the West.

We should brace ourselves for a rise in the cost of living, including prices of goods and services and rent.

Just try buying ginger from the market and you’ll be shocked with the price and the quantity and quality available. I wonder what happened to our slogan, “Buy local”.