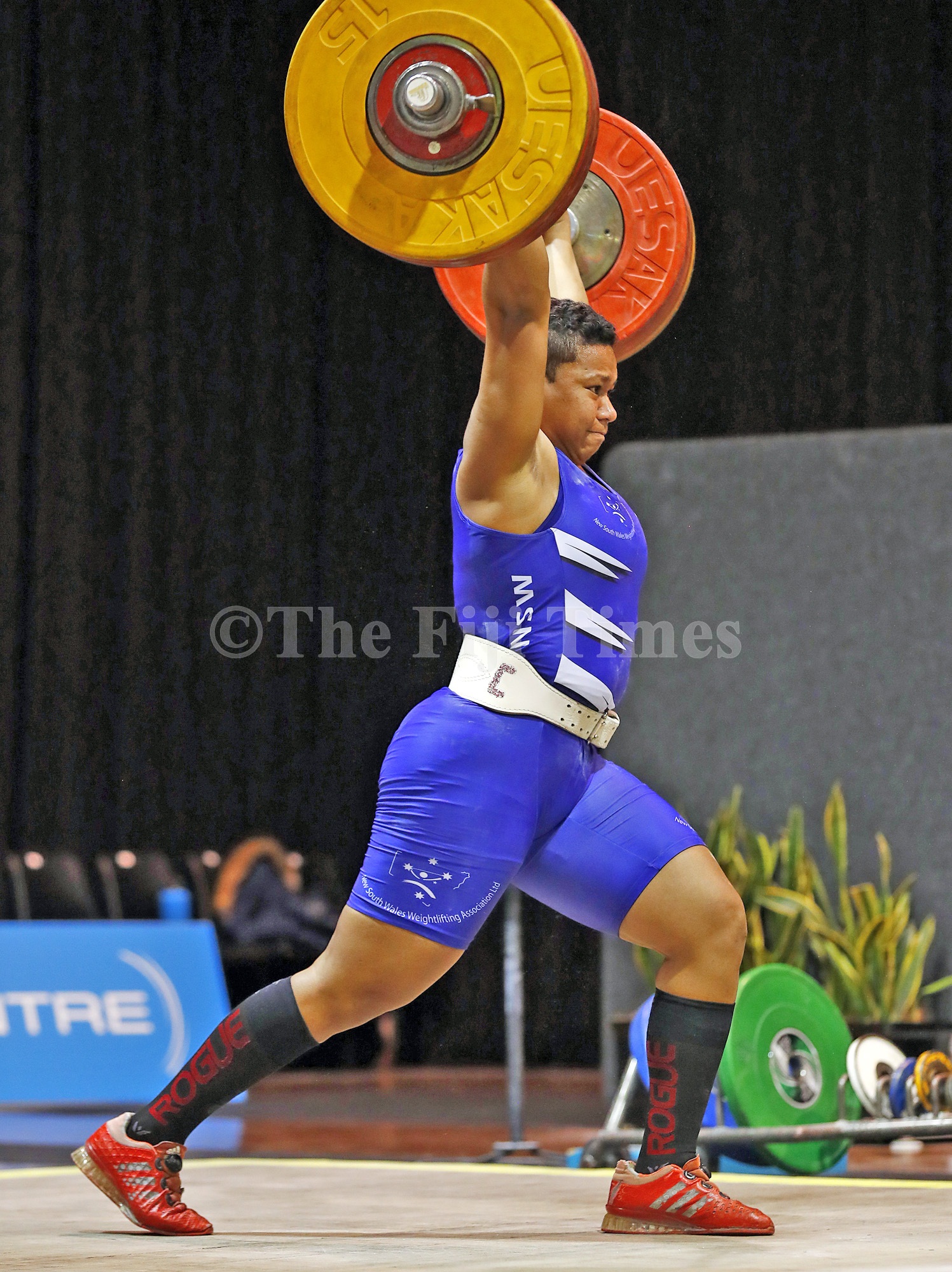 SUNDAY TELEGRAPH - 17/8/19 Australian National Junior Weightlifting Championships at Sydney Olympic Park. Eileen Cikamatana - 19yo from Fiji who is hoping her Aussie citizenship comes through in time to qualify to compete for Australia at the Tokyo Olympics. Eileen breaks the world record with a clean and jerk of 155kg. Picture: Sam Ruttyn

I salute the Youth and Sports Ministry permanent secretary Maretino Nemani for airing his views on the need for sporting federations to tread carefully in the management of elite athletes if Fiji was to retain talented and high-performing athletes such as Eileen Cikamatana.

Coming from a sporting background, Maretino Nemani was a household name in soccer and those who are ardent Suva fans will know the role he played to guide the “whites” to victory in the local league and local soccer tournaments.

I learnt that Eileen was given funding of $45k to assist in her training in New Caledonia at the Oceania Weightlifting Institute and was awarded a FASANOC Olympic solidarity scholarship.

Hence, I believe that Eileen deserved more than what she got from Weightlifting Fiji.

Mr Nemani, sir, via The Fiji Times, I’m interested to know the make-up of Fiji Weightlifting Association and if any of the current board members have any experience in weightlifting.

Atma Maharaj, who, I believe, is our Australian-based Weightlifting Fiji president, must answer queries as we can’t afford to lose potential athletes such as Eileen Cikamatana (to Australia) and (Manueli Tulo) to Vanuatu!

Thank you very much The Fiji Times for being so vocal on Eileen Cikamatana’s case.

Could the PS sports find out why a budding athlete Yash Karan was not included in the Fiji team to Samoa?

I think this Tavua boy is a gifted athlete.

He and his coach could do with some funding.

One of the greatest wrestlers of India The Great Gama as he was known, was funded by the Indian government for his daily food intake which included six large chickens, 15 litres of milk, a few kgs of almonds per day.

This wrestler was a world champ and never lost any match in his career.

It’s no use crying over spilt milk.

Eileen Cikamatana is where she is because, I believe, that’s exactly where Weightlifting Fiji and FASANOC drove her!

Whatever the circumstances surrounding her development, she is one determined individual out to prove to sporting administrators that where there is a will there is a way to achieve absolute success.

For Eileen’s future, the question that she needs to ask herself is where will she be better off?

The latter is definitely the better option for her sporting career and life after sports.

Winning gold for Fiji will hardly bring about any good for her.

Opportunity rarely knocks on one’s door, but Eileen has taken her chances and knocked on opportunity’s door with enthusiasm and rigour.

Such a situation when properly perceived has turned out to be a great opportunity.

She is no longer our Golden Girl but Australia’s!

I note calls in the letters column to reduce the price of meningococcal vaccines.

Because of many factors it is difficult to determine costs but I estimate a single dose cost from Fiji pharmacies would be $180 plus.

My question is what do citizens expect to pay for something that would save their lives from a rare disease, and who do they expect to pay the subsidy?

I doubt the health service has funding for an intensive vaccination campaign such as was done last year targeting those 19 years and under.

I would expect the health service to provide free shots to those possibly exposed to infected persons, however.

Some months ago, unfortunately, two American tourists died from a rapid onset illness, as far as I am aware there has been no indication as to the cause of death.

In this day and age, I find this surprising, but perhaps I have been watching too many CSI episodes.

BOOM economy yet we cannot raise the minimum wage rate.

Every day I read about the traffic jams in Suva.

Many people post on Facebook of their experiences while sitting in the bus caught up in the jam.

One that made me laugh was a chap who is now so used to it that as soon as he sits in the bus after work he settles down for the ride home and goes off to sleep.

When the bus left on that day he fell off to sleep and woke up sometime later and thought he was halfway home.

He had to laugh when he realised they were still stuck in the traffic to Lami and almost everyone was asleep.

What made him really laugh was a woman who was sitting in front of him snoring like she was sleeping at home.

How bad is the traffic jam?

I have a feeling that it will get so bad that one day people will knock off, get on a bus, sleep, wake up and it’s time to go back to work.

NCD is the silent killer and no doubt all efforts are taken by authorities to combat Fijians dying young.

I believe that there are many factors that are interlinked and have ripple effects on our society.

4. Inability to buy the right food because of purchasing power and low income;

5. Effect of daily life such as job insecurity, frustration, social and political situation deteriorates health both physically and mentally.

Now we want to reverse the situation which was once enjoyed in our childhood where all were happy with little.

Too much is not good at times.

Though a bit late, there is a saying that we can fix it.

God bless us all!

If these boys came from such a remote island that they were not aware of traffic and how to get into a taxi may I suggest that when they took their shoes off to get on a bus it was not by respect for a “moving house” but the fact that their feet were sore, this being the first time they had worn shoes.

According to my mathematics, the only real benefit occurred the year they brought it in, with hundreds of positions suddenly being declared vacant as the employees, 55 years old and over, being packed off home.

From there on you still have the same number of people retiring each year barring accidents and ill health, but we are left with an ongoing social legacy of a generation being forced to retire early with the loss of their experience and skills.

Moving one hour ahead equates to daylight saving (in Fiji) when sunshine hours are longer towards the year end and beginning.

Any sense in going one hour behind during the mid-year period when sunshine hours are shorter?

Will it be as “beneficial” as daylight saving?

Next time there is an unplanned service outage, can Walesi Fiji please inform the public through their social media page.

There was a transmission outage on Wednesday and here I was going in and out the house to re-adjust the antenna and check if there’s any picture.

It went on for quite some time and my dog just lay there weirdly looking at me.

Must have been thinking I’ve lost the plot.

In my day Piccadilly and Central were the two taxi firms.

The traffic around Suva City is a supreme challenge for pedestrians, especially qase ones.

Would the council consider a Suva City ruling that works successfully through Kalakaua Ave the main Honolulu Waikiki thoroughfare.

There are crossings but large signs say “Pedestrians have right of way at all times”.

This consideration to pedestrians is appreciated by all.

Every now and then I feel the need to visit the burning west, especially when the weather in Namosi highlands gets too cold and I get too many complaints from my tavale.

In Sigatoka, I can experience the feeling of being an ordinary tourist.

As I boarded a taxi last week, the driver told me straightaway: “Here in Sigatoka, we Indians and Fijians are friends and there are no problems.”

The same day, sitting around the tanoa with new friends, a giant middle-aged man who probably played rugby when he was a bit younger (and perhaps more slim) said: “In Nadroga, we have the best rugby players in the world, and we are friends with everybody!”

I find it funny to notice that the grassroot people of Sigatoka seem to be in a constant need to reassure “tourists” like myself that Fiji is still a paradise, that we all love each other, that we are one single nation, etc.

Perhaps at the eve of Fiji’s 50th anniversary, it might be time for some of our politicians to take notice.

Whatever symbolic action they can take to support the point of view of the honourable Koi Sigatoka would certainly be in the long-term interest of Fiji.

Successful people are not afraid to fail, for they accept their failures and continue to move on, knowing that failure is a natural consequence of trying.

They go from failure to failure, and by not making the same mistake twice, they will eventually find great success.

The law of failure is one of the most powerful of all success laws, for we fail only when we can’t accept failure.

This reputation is noticeable in successful people.

The problem with unsuccessful people is that they continue to make the same mistakes over and over again without even realising it, basically in a merry go around state of mind!

We are quick to jump at and demand answers when one makes a mistake but we can hardly ever praise nor highlight the same person’s successes.

All failure is a success if we learn from it!