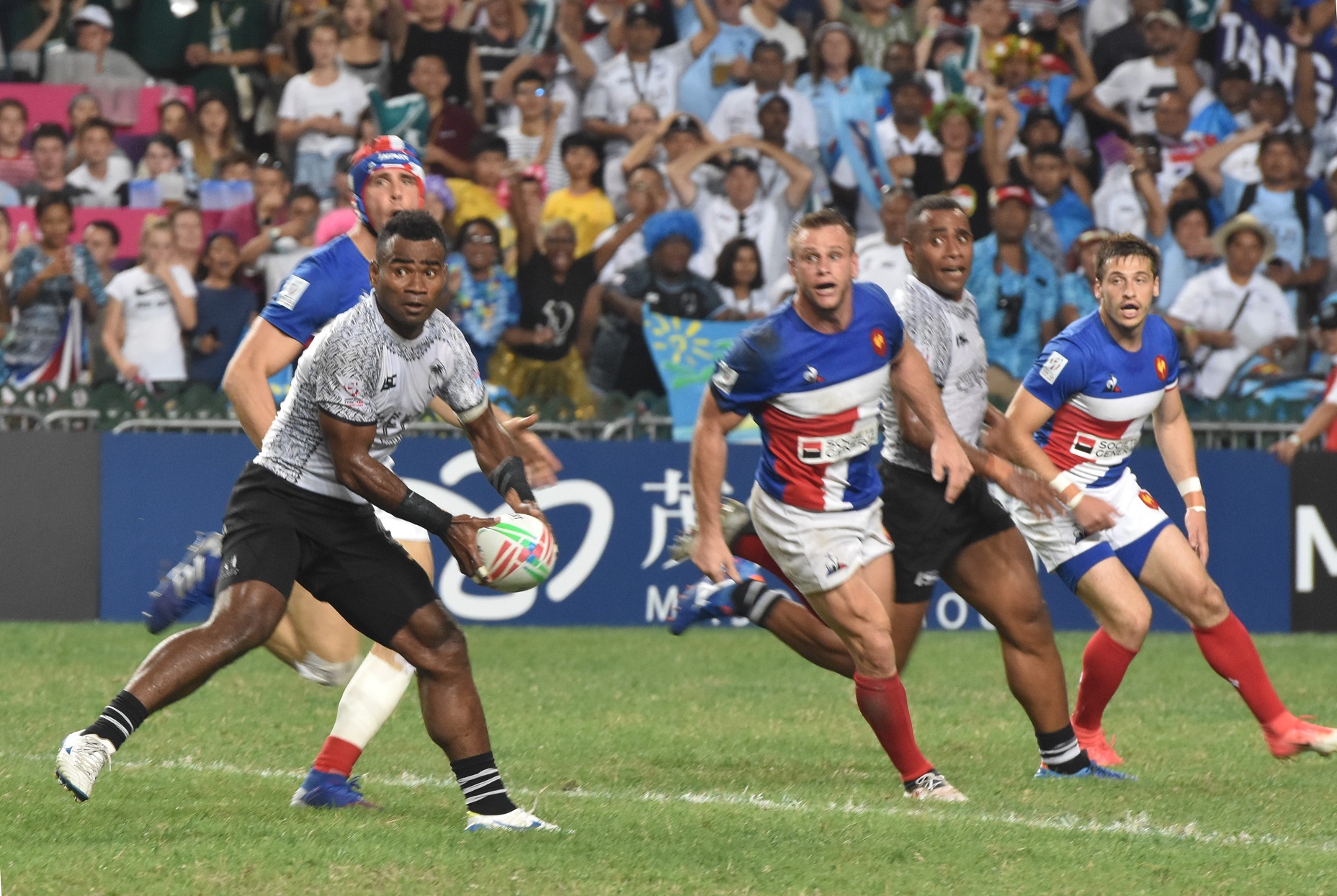 TRAILING the USA Eagles by three points and with one month to go, the Fiji 7s team faces a daunting task ahead of the London and Paris 7s.

Jerry Tuwai is injured and so is Waisea Nacuqu – two of our key players who add the thrust in the back line.

If we have to win the WRSS then a win in London or Paris is a must and I suggest that we must recruit the best players available to get the job done.

Hence, I plead with FRU and Gareth Baber to give an opportunity to our stylish playmaker Vatemo Ravouvou to redeem his 7s career and prove himself.

Vatemo’s guidance during crunch time and his expertise at decision-making and taking restarts and conversions are being missed.

I know some might disagree with me but I believe that players must be given an opportunity to rise and learn from their mistakes.

After all, we are humans and nobody (including Baber, FRU and the team management) is perfect.

I wish our boys a quick recovery and all the best in the preparations for the London and Paris 7s.

A REPORT (FT 25/4) tells us that the public will not have access to the sex offenders register.

I believe only the police, Ministry of Education and Social Welfare will.

This is according to Alvick Maharaj, the chairman of the Standing Committee on Justice, Law and Human Rights.

He goes on to say that the police will monitor sexual offenders in society.

If a new resident moves into an area, the police will know if he is a sexual offender.

Really, the police will really do that?

They will be on the alert for the offender?

Will the police really go around monitoring if the person is hanging out with children?

Oh my gosh this is so fantastic it can be true.

The police have the manpower to do this, right?

This was the most unexpected attack on people who had gone to the mosque to pray.

This is unheard of in the Pacific.

The peaceful nature of the Pacific was shattered forever.

People of all denominations rose in support of the Muslim community.

Prayers and condolence meetings were held and condemnatory speeches were made.

The ugly face of the white supremacist group sent chilling shivers down every- one’s spine.

The New Zealand government came out in full force to support the families of victims.

This was great indeed.

I believe RDX grade explosives were used in this attack.

There was outrage in India and the Indian Air Force carried out a surgical strike on the twelfth day and Balakot area was devastated.

This action further raised the tension on the border between India and Pakistan.

The terrorist attack in Sri Lanka has been most unfortunate and most devastating where more than 300 innocent people were killed.

Some were foreign tourists.

The ISIS terrorist group has claimed responsibility for this vicious attack.

With this the Easter celebrations were plunged into mourning.

Fijian Prime Minister Voreqe Bainimarama has sent condolences on behalf of the Government and Fijian people to Sri Lankan authorities.

It is to the credit of Indian Prime Minister Narendra Modi who raised the issue of terrorism at the United Nations.

He urged this august body to stop shuffling its feet on the issue and to clearly define who is a terrorist and how to tackle them.

Luckily for him he got a wide-ranging support on the issue.

I AM reliably informed that police traffic officers have been given a monthly target of fines to collect from traffic-related infringements.

Obviously, it will assist to boost the much-needed government revenue.

Hence, the beefed-up vigilance on our roads resulting in an increase in bookings.

Whether this is having any impact in curbing the accidents on our roads is yet to be seen.

However, my greater concern is that the resources allocated towards achieving the revenue target should not come at the expense of compromising their core law enforcement role.

PLEASE tell us who is in charge of redoing road signs.

Maybe I can help.

WILL the colour codes curb the pirate taxis?

WITH yet another prison break, I believe our prisons are no longer effective prisons but simply a revolving door in and out of hotels that prisoners can simply check out of at any time!

IF there is one thing that the heavy rain around the country has revealed, it is our trash.

Rubbish has washed out and over everywhere.

Plastic, most of all, is the most garbage.

It’s as if nature is trying to remind us of how reckless we are.

We definitely have huge problems disposing our wastes.

THE heavy rain opened up a lot of potholes on our roads and millions will be used to repair it again.

Imagine if we had concrete roads we might not have the potholes!

THERE is a group of youths who hang around the market area in Nadi Town to sell cigarette rolls.

This occurs daily, in broad daylight.

DONALD Trump is going to London to see the Queen.

All the British people will be excited by Trump’s visit.

A good number will no doubt take to the streets to welcome him!

Mr Patel has been the president since 2011 and has got another four-year extension from May this year.

He must be doing a very good job because he was unopposed and supported by all the districts.

Wish you remain unopposed for a very long time.

WOULD the Minister for Education make known the new policy on the use of school minibuses released recently to rural schools?

On Good Friday, one of the buses (I have the registration number) was returning to Wailotua region with two gentlemen with bread and newspaper purchased in Korovou.

The schools were closed and children at home or in church.

Who uses the bus and for what?

This tournament involves top international rugby teams and is held every four years.

For the first time the tournament will be played in Asia and what a rare golden opportunity this is for the region’s rugby enthusiasts.

New Zealand is the current champions, remember they defeated Australia in the final of the 2015 tournament which was held in England.

I think the RWC is the third largest sports event in the world after the Summer Olympic Games and the FIFA World Cup soccer.

We can’t wait to see our own national side run on the field and show the same bravery and commitment as our sevens boys.

Our head coach is expected to announce his 50-member extended squad soon.

I believe full swing preparations should get started after the announcement of the team next month.

The usual world cup fever is missing and I think this could be because of the sevens.

Well, all the best in your preparations Mr McKee.

The question is who will win the 2019 RWC in Japan?

HUMAN rights violation is a concerning issue in our society today.

In Fiji for instance, I believe nearly three to four separate cases of human rights abuse are reported in a week.

These human rights violation abuses such as rape, violence and children getting molested appear to be the common ones for us in Fiji.

Regarding this issue, I would like to comment on the increasing number of rape cases in our country.

As concerned citizens of this country, we need to stand up and address this issue publicly so that people can know that this is not acceptable.

In trying to combat and eliminate the increasing number of rape cases, I do believe that we all should have a responsibility in this.

Firstly, it should start from our own family.

Family is the foundation of our community and social structure.

It is where children are brought up and taught valuable lessons that will determine his/her future.

As a parent, I would like to encourage all of us to play our role as parents and support our children in an appropriate way that will lead them to a better future.