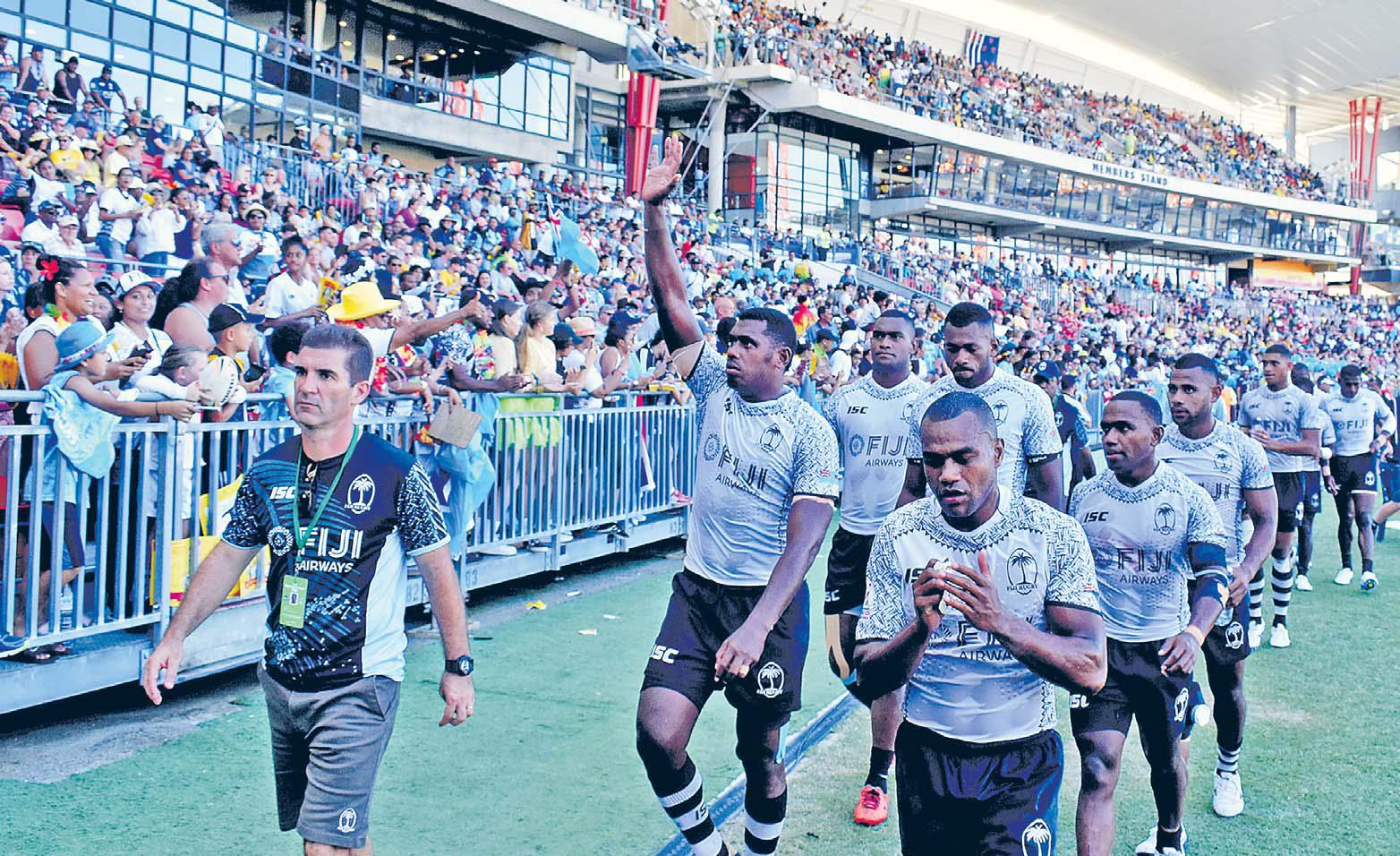 Members of the Fiji Airways Fiji 7s side after their semi-final loss against New Zealand at Spotless Stadium in Sydney, Australia, yesterday. Picture: BALJEET SINGH

Isa, last week this time on an eventful and exciting Monday The Fiji Times had a beautiful picture of our boys with the rewards from Hamilton. Yesterday’s The Fiji Times carried the picture of our boys in low spirits after getting thrashed by NZ in the cup semis. Even the 7s guru who walked away with the Mark of Excellence Award in Hamilton looked dejected and disappointed. Renowned Tongan international and rugby 7s commentator Willie Lose had said and I quote, “Everyone wants a bit of Fijian magic”, however, the magic and spark seen in Hamilton went missing against the All Blacks as the scorching Sydney heat shadowed Fiji’s Hamilton effort and fans found out that the little things that mattered in 7s — discipline, communication, pace, ability to tackle, taking conversions and utilising opportunities were not going Fiji’s way. The All Blacks suffocated us and kept possession. Once we were deprived any possession, we lost our cool and the winning battle. Our discipline was poor and the red and yellow cards dished out made matters worse. Our K-train (Tuimaba) and runaway-train (Nasoko) looked shell-shocked and those responsible for turning things around (Botitu, Tamani, Jerry and Wise) were off their usual mark. It just wasn’t going our way and we made numerous mistakes as pressure mounted. On the other hand, the USA Eagles lost four finals in a row but their morale was very high while England and NZ showed that to consolidate a top spot in the series requires every ounce of strength and character. Our boys were tired. I don’t blame them — they did their best to make us smile, but they failed like Waiyaki — the main character in Ngugi’s novel The River Between. As we look forward to Las Vegas, let’s keep the momentum high and just like the Naduva factor, I am adamant that our warriors will rise and shine in the enemy’s territory as I look forward to more incredible and unbelievable stuff from the legends of 7s rugby. Toso Viti toso! Rajnesh Ishwar Lingam Nadawa, Nasinu

It was a bitter week in Sydney as our men’s and women’s sevens teams failed to shine. But some will say negative things while others will congratulate them. Fiji always is unlucky in terms of pool draws and it has always been the case. We played against good teams in our pool matches. England was the inform team in Sydney, Japan always are a threat and Samoa is physically strong. Soaking all that tackles and pressure must have made our boys tired. The quarter-final against Australia will always be tough on their own soil. The semi-final against the Kiwis was also tough and the tackle by Mocenacagi was needless. Our boys put on a good show and I know USA 7s will be Fiji’s to take. We may end up meeting USA in the semi-finals. All the best to our sevens players. Quick recovery and best wishes is all we supporters can give. Amrit Singh Naselai, Bau Rd, Nausori

I was watching the Fiji One news on 1/2/19, and one of the highlights was the opening of an ice plant in the village of Natokalau on Cicia by the Minister of Fisheries, Semi Koroilavesau. While I am truly grateful for the Government’s initiative to help communities on the outer islands, however, a point that I do not seem to understand is why was the minister’s speech delivered in English in an entirely iTaukei community? Mr Koroilavesu is a minister of iTaukei descent and I sincerely believe that if his speech had been delivered in the iTaukei language, it would have carried more weight to the people of Cicia for they would have understood him better and the reasons for such development. In this case, can it be possible for the minister to deliver his speech in vernacular or is he obliged to read the speech which was prepared for him, even though the community may not understand it at all? Kositatino Tikomaibolatagane Vuninokonoko Rd, Navua

Employers are concerned that while graduates held relevant qualifications, they lacked the necessary skills to do the job (FT04/02). This is not a new problem and has always been the case for decades now. Far too many of our qualified tertiary students have no idea how to apply theoretical knowledge. While many consider theoretical knowledge as very important, practical knowledge is by far more important. Practical work gives one the experience and confidence to do the job with ease. Getting theoretical knowledge has no value until students can apply it to practical purposes. Another factor that is far lacking is the passion for a job. Many students are forced by their parents towards a particular profession that is not their passion. While parents are responsible to gauge and direct their children through their primary and secondary school education, they should let their children choose for themselves the profession they would like to pursue. This will drive and motivate them with strong emotion and they will feel passionate about their profession. This will enable them to apply all their skills and energy into the work they love. It is indeed sad to see people unhappy with their profession simply because they were forced into it. For optimal results, one must be able to achieve a good balance between theory and practice and the only way forward for this is to set policies to enable students to get practical experience while attempting their theoretical qualifications. Practical work needs to be the application of theoretical knowledge! Simon Hazelman Rava Estate, Savusavu

It was a pleasure watching Naduva use his speed to the maximum in Sydney over the weekend. He was like a torpedo, appearing from nowhere and scoring tries at crucial moments. In fact, he got us out of jail from an almost certain defeat to the Australians. Others such as Teri Tamani and Cakaubalavu played quite well. In fact, Cakaubalavu’s performance may see him getting the nod in the starting line-up. Jerry Tuwai was like a magician guiding the team when under pressure. All in all, fans must continue to support the national 7s team but there is a real and urgent need for players and management to conduct a reality check if we are to bounce back come the next tournament. Floyd Robinson Toorak, Suva

One thing that I noticed while watching the Sydney 7s was the crowd. In Hamilton, the noble banner blue filled the stadium and the stadium was not so full in Sydney. What was the difference, was Sydney more expensive than Hamilton, or are there less Fijian supporters in Australia? Anyway, after Fiji lost to New Zealand, supporters stayed on and cheered and waved the Fiji flag. Then Fiji met England and the supporters were there to the end. That is what I call diehard fans. We now look forward to Las Vegas and I am sure the coaching team will know how to get back our Hamilton form. My basin of grog and I will be cheering for Fiji. Allen Lockington Kava Place, Waiyavi, Lautoka

The level of competition in this era is leading man to cheat at its highest level. Trying to get even with personalities or institutions including sports teams has become the buzz word. Remaining a champion is becoming a real challenge as there are smart descendants of Homo sapiens who have strategies to get you down. Such was the case at the Sydney 7s during the game between Fiji and the smaller version of the All Blacks. The route to winning has changed from facing up to the opponents to killing the opponent. Unfortunately for the commentators, it was a splendid performance from the eventual winners. We definitely have a difference in opinions, but not to the level where fair play and justice is ignored. Win at any cost is the business paradigm now and our adults are displaying very poor human behaviour which is also being displayed by our young ones. Please do something about such bad actions before our kind is taken over by the very species whom we are supposed to have been evolved from. Leaders, it is not your qualifications but your honour that counts. Remember that champions are not for ever but temporary. However, it is how you became a champion added with how you display champion behaviour that will be remembered forever. Justice and honour is just talk but when it comes to practice, it is a lost factor in all our dealings. Fiji, you are still the champions. Dhirendra Prasad Lautoka

In thanking our boys for doing the best under the circumstances in the Sydney HSBC 7s Series, I could not help wonder where the team which won the Hamilton 7s was this last weekend. Missing from the whole tournament was the confidence, the relaxed mood, the organisation and especially the simple fun of the game which contributed immensely to last week’s win. We hope that these qualities will return for the next leg. Thank you once again boys! Emosi Balei Kini St, Suva

It is often said that a woman can change a man. I shed a few tears after my mate Cameron went again to mass after a lapse of two years. Not happy tears because he was concerned for his faith but because it took a woman for him to attend mass again. Hahaha. I wish my brother well with his newfound love. Definitely I will be making lovo and hosting them to a Sunday feast. A one stone lovo! Wise Muavono Balawa, Lautoka

Will there be people assigned to periodically check and count the same four million trees planted and also at the end of four years? Just to monitor the project’s progress and success. Mohammed Imraz Janif Natabua, Lautoka

Trailing in third spot after their home event, the All Blacks clawed their way to the top and now have matched Fiji’s two tournament wins on the 2018-19 WRSS circuit. Even without veterans Scott Curry and Tim Mikkelson, the young guns in Gregory, Ng Shiu, Ware, Nareki, Molia, Vili and Ravouvou combined with Sam Dickson to match the power-packed USA Eagles in Barrett, Tomasin, Isles, Pinkelman, Niua, Hughes, Iosefo, Thompson and Williams. The defensive structure of the All Blacks was massive and tremendous and I congratulate Laidlaw and Cama Jr for mentoring these boys into becoming champions! Rajnesh Ishwar Lingam Nasawa, Nasinu

The people of Naimalavau Village in Nakelo, Tailevu were verbally at war with the WAF during the Christmas and New Year period. There wasn’t any water at the village during those times and after the planned water shutdown at the Waila Treatment Plant which enabled the Water Authority of Fiji (WAF) to carry out improvement works, the villagers of Naimalavau and nearby villages now have better and improved pressure and consistent water supply in the area. We were willing to wait for as long as it took to fix the problem and now that everything is back to what it was before, we the people of Naimalavau are so grateful and vinaka vakalevu to the WAF for a job well done. Tomasi Boginiso Nasinu

Chinese Year of the Pig starts on February 5 and it is said to be “a great year for personal development”. Many non-Chinese can also no doubt benefit that way! Rajend Naidu Sydney, Australia