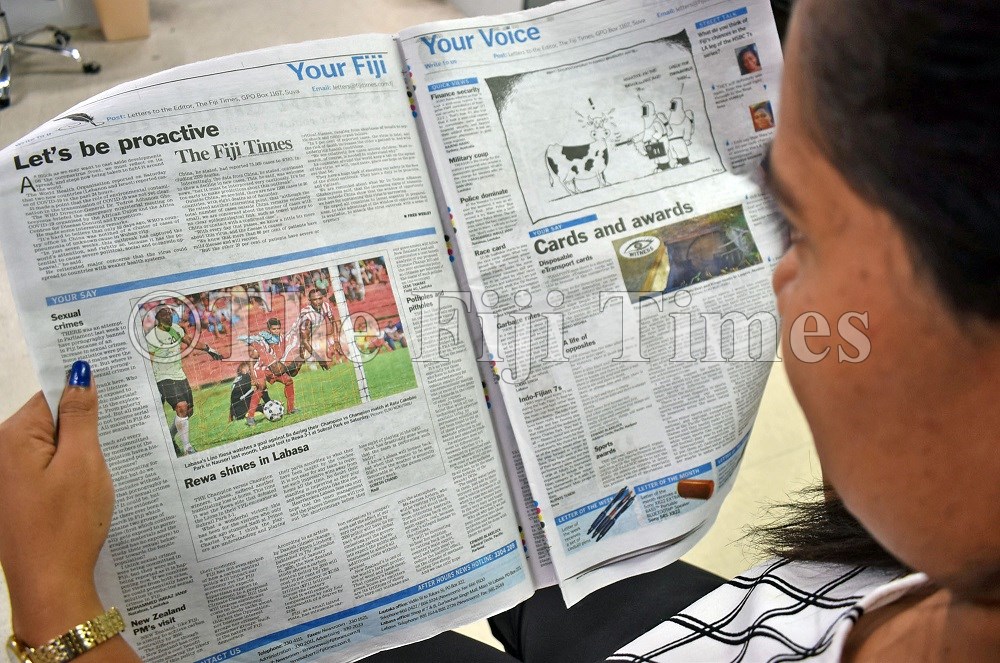 A reader reads through the letters to the editor column of The Fiji Times newspaper. Picture: JONACANI LALAKOBAU

Letters to the Times

Can you imagine a Fiji without The Fiji Times and its consistent letter writers? Prominent names such as the evergreen Allen Lockington, Rajnesh Ishwar Lingham, Kiniviliame Keteca, Dan Urai, Rajend Naidu, Vijay Naidu, Selwa Nandan, Arvind Mani, Korina Waibuta, Sukha Singh, Amrit Singh, Floyd Robinson, Simon Hazelman, Areki Dawai, Savenaca Vakaliwaliwa, Joeli Naleca, Ashneel Prasad (missing in action though), Kirti Patel, Wise Muavono, Richard Naidu and Prof Wadan Narsey are always names to look forward to as an avid reader and follower of The Fiji Times. Their letters are always a pleasure to read. I find their letters educative, scrutinising, critiquing, informative, engaging, persuading and compelling and with some good sense of humour added to it nevertheless. Their letters make one to think outside the box, to contemplate, to appreciate and celebrate life and offers positive criticism and some very valuable lessons. I take this time to thank the editor-in-chief Fred Wesley for printing their letters. No wonder the phrase that, great minds think alike; and indeed they do! I also pay homage to writers that have passed on to the next life. I can’t thank you enough for all your writings. May you all continue the good fight and never grow weary! Alipate Tuberi Suva

As I drove through Suva on Sunday night my eyebrows rose as I encountered police officers standing at each street corner waving blue flashing light sticks at traffic and ordering everyone off the road. This is the scene with which the people of Suva are now familiar with as we brace ourselves for a motorcade. One of our hardy group of Fiji motorcade measurers was able to film the drama. A (mere) three motorcycles and 13 motor vehicles flew down the empty Suva-Nausori corridor, sirens (of course) at full blast, in all their greenhouse gas-emitting glory. This would be rated at about “Grade One Motorised Convoy”. But then I learned this was only a rehearsal. The real thing — the arrival of the New Zealand Prime Minister —was to happen the following night, Monday. One assumes that for the Second Coming of Ms Ardern, there will be (or was) at least the same number of vehicles, possibly more. There might still be time to upgrade (I believe the count for Papua New Guinea’s leader a few years ago was 22). New Zealand’s leaders are relatively laid-back operators. They are generally comfortable about their country’s role in the world as a small and reasonably successful democracy. They would suffer widespread scorn if they tried this kind of stunt at home. So it’s unlikely to be Ms Ardern demanding the high-speed hoopla. Of course, as her hosts for the duration of her visit, we are responsible for her security. So, what is the threat assessment? Are there terrorists lurking in a turbo-charged Prius at one of the junctions? And why do we need to rehearse the motorcade? Haven’t the police had many years of practise already? Or is it to map the new potholes to ensure that the snappy ride is less bumpy? Why inconvenience the 200,000-plus people in the Suva-Nausori corridor — twice — just to show off to a group of visitors who are more likely to be appalled than impressed? There’s something slightly pathetic about these displays of motorised grandeur from a Third World small island state – which, let’s face it, is what we are. Security? Or insecurity? RICHARD NAIDU Suva

Police Blue and Police White battled it out at this year’s Nawaka 7s as the Blues sailed calmly to collect the silverware and prizemoney. Police Blue without captain Suliano Volivoli but with the likes of Taliga, Viriviri, Sauturaga and former Tabadamu and national 7s play maker Terio Tamani had too much gas in the tank for Police White who had the services of former Nadroga star Nacebe and Railoa. Police was able to defend the Nawaka 7s title and a lot of credit goes to the team management for maintaining high standards and taking part in most of the 7s tournaments around Fiji. The 33rd Nawaka 7s is history and I was glad to see 7s Guru Baber present at Prince Charles Park to witness the performance of our boys. A big vinaka vakalevu to the organisers, officials and players for making the Nawaka 7s a success! Rajnesh Ishwar Lingam Nadawa, Nasinu

I was dumbstruck to see wasteland now along the once green lush mouth of the Sigatoka River (FT 20/02, 22/2). Our Government leaders tell us that it is not mining for magnetite yet but only the exploration stage (FT 20/02). I thought blimey, if exploration has given us a desert, imagine what mining will do. Do we really want to find out? It saddened me to see our Government leaders go on to say that they were only dredging the Sigatoka River (FT 22/02). They have dredged the Rewa River several times over so many years and I have yet to see the desert we see at the mouth of the Sigatoka River, here. Korina Waibuta Knollys St, Suva

Tyson Fury delivered on just about everything that he promised in the lead-up to his huge rematch with Deontay Wilder, winning a seventh round TKO to claim the WBC heavyweight title in Las Vegas. Boxing fans watched Fury absolutely dominate, knock Wilder down repeatedly, have him bleeding from the ear and proceed to lick that blood. While the first meeting went the distance and nearly ended in a Wilder win by knockout, Wilder was out of sorts for much of this rematch. Wilder’s corner had to throw in the towel to stop the fight in the seventh round out of concern for his safety. Wilder has 30 days to activate his rematch clause but I believe it would not be wise for him to face Fury ever again. He should recuperate for now and try to set up a match with the likes of Dillian Whyte, Dereck Chisora or Andy Ruiz. Crossing paths with Fury will prove fatal. Fury’s dominant performance against the previously unbeaten Wilder proves that the heavyweight division has a new king and many potential champions will have a very difficult time staying in business. Next on Fury’s list would be Anthony Joshua for the heavyweight unification bout but I feel Joshua and his promoter will eventually decide to face the mandatory challengers instead of putting everything on the line against Fury. Joshua had earlier indicated that he hoped Fury would win so that they could set up an all-British heavyweight unification bout. Well Joshua, your dreams have come true but it’s not the most ideal situation for you to be in right now. You need to run as fast as you can and avoid crossing paths with the “Gypsy King” if you want to keep hold of your belts. Shad Alfaz Ali Navua

It was a sensational victory for Tyson Fury as he dismantled Deontay Wilder in an eventful night in Vegas. Wilder’s corner threw in the towel as they saw no signs of coming back in what was expected to be tit for tat thriller. However, it was the masterclass of the “Gypsy King” as he dethroned Wilder of his reign. Previously undefeated Wilder, had lost to a classy opponent in the seventh round when the referee had to call it over. Although disappointed with the decision, Wilder had to accept it that Fury was the better boxer on the night. Tyson Fury, know the name, is going to turn many more heads in his already illustrious career that he has had. He has proven himself in the ring that no trash talk can stop him if the mind is of a champion. What a night, what an event, what an atmosphere, and what an impeccable result. The “Gypsy King” has done it in style! Raynav Chand Nakasi

Who would have thought the Hong Kong Sevens’ unbroken run since 1976, would finally be broken, street demonstrations and protests since last year was close to becoming the real possibility, we all reckoned, who would have thought that out of the blue, Covid-19 will completely take over, to defer the Singapore and Hong Kong Sevens this year, to the month of October, that will mean Hong Kong will be where the winner of this season’s HSBC Cup will be crowned, and not after the Paris Sevens in May, as we have always known, coming after the apex event – the Olympic Games – seems like an anticlimax, but that’s the way it has to be, we just have to accept the situation, wait it out and chillax. Qarauna Viti qarauna na corona. Edward Blakelock Admiral Circle, Pacific Harbour

In the morning a lot of workers travelling to Nadi allow the bus to pass. They wait for minibus and private cars or taxis because they don’t have any eTransport cards. What’s failing? Dan Urai Lautoka

Coincidence or no coincidence, vatu is part of Vatukoula and Tuvatu. I had learnt in primary school that Bill Borthwick had discovered gold in Vatukoula. Who has been credited for the discovery of gold in Tuvatu? Mohammed Imraz Janif Natabua, Lautoka

Where are the contractors who are supposed to be looking after the Sigatoka roads, particularly in the town area? The pedestrian crossings are almost non existent and dangerous because the lines have worn away. The Korotogo roundabout is very dangerous due to the tarseal melting during the hot weather and the very large trucks and buses leaving their wheel ruts in the soft tar. The lines on the highway have worn away and there are very few side of the road lines. Please FRA , do something about these contractors and fix the roads. Margaret George Sigatoka

Without doubt, of all the sporting events around the globe over the weekend, the heavily awaited rematch between the “Bronze Bomber” and the “Gypsy King” in the WBC heavyweight bout took premier status. Three former champions were honoured before the main event. After the grandest of entries which was classically touched by Hollywood theatrics, Fury produced a dominating performance to be crowned the new champion. He had odds stacked against him. He had huge concerns of getting cut. He had a point deducted. But a fierce right hand was enough to bring the high flying Wilder down who struggled thereafter and eventually out flew the towel. Mohammed Imraz Janif Natabua, Lautoka

Not attempting to ruffle any feathers but how exactly would fasting and prayers resolve the pollution menace in creeks and rivers? (FT 24/02). I believe divine intervention will not be of much assistance, it’s the irresponsible dirt clogged mindset of some individuals that need to change. No need to engage God here, spare the fasting for Easter. Nishant Singh Lautoka