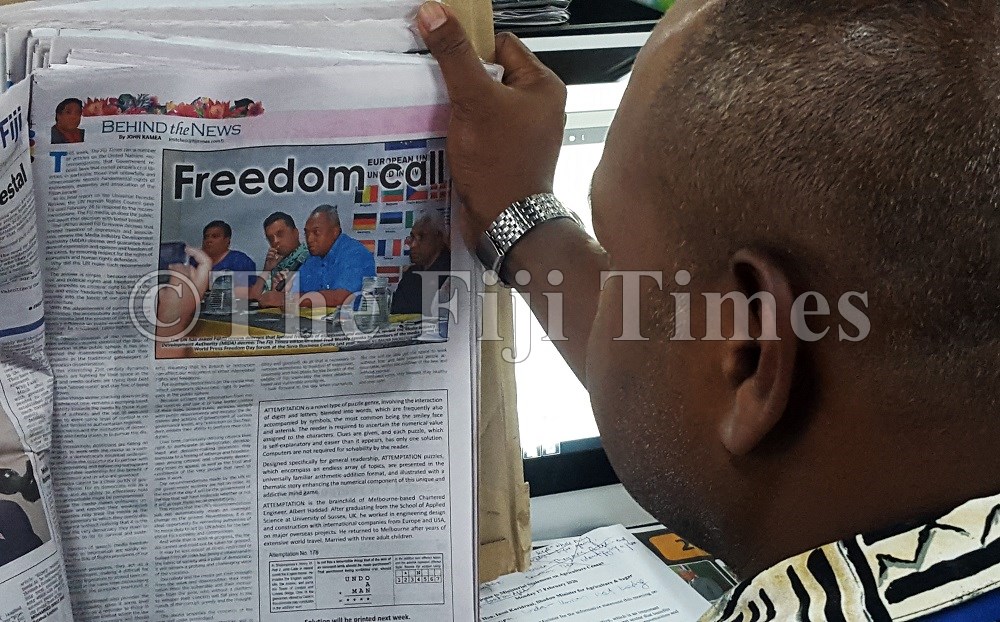 Our letter writer says he looks forward to the day journalists can work without fear and hold powerful people accountable. Picture: ELIKI NUKUTABU

In the concluding statement in his excellent article “on the United Nation’s recommendations that Government repeal laws that curtail people’s civil liberties in particular those that unlawfully and unnecessarily restrict fundamental rights of expression, assembly and association of the Fijian people” (FT 16/02 ) John Kamea says: “I look forward to the day when journalists like me will be able to get space to work without fear and hold powerful people accountable, within the confines of the law, and without reprisal.” As a reader I also look forward to that day. Freedom from fear is the essence of a free and open society. We must strive for such a society, the only one that brings out the best in all its citizens and keeps in check abuses of power. The UN recognises that. We must do that as well. Rajend Naidu Sydney, Australia

National 7s icon Jerry Tuwai and swimming sensation Moana Wind took top honours at the 2019 Fiji Sports Awards night. I had stated in my letter on Saturday that Jerry deserved the sportsman’s award but the sportswoman’s award was a tough one to call but I’m sure that the hardworking panel made the right choice. Gareth Baber, who addressed the nominees and invited guests, also walked away with the coach of the year award while Rama from The Fiji Times collected the sports photographer of the year award. I must also congratulate our national 7s team for winning the team of the year award and Daniel Shaw and Rebecca Johns for being crowned the young athletes for 2019. The moment was beautiful as the sea of colours enjoyed what was at stake at the Vodafone Arena. Like any humble gentleman, Jerry attributed the award to his fans and members of the national 7s side. I also believe that our “Little Master” who has won the most WRSS titles and the most number of tournaments deserves something special. If Iliesa Delana can get a house from the government for winning a gold medal then why can’t “Little Jerry” be honoured with something that will reward his efforts for our nation. I also acknowledge Baber for his powerful address to the audience at the Vodafone Arena. Rajnesh Ishwar Lingam Nadawa, Nasinu

I refer to Julie Sutherland’s letter to the editor on February 8, 2020 in respect of the road safety advertisement on television. It is pleasing to note that she finds the advertisement tuneful and very appealing. We certainly agree that it is indeed very catchy. Reaching out to our children on road safety is very important, particularly given that since January 2018 to date we have lost 15 children to motor vehicle accidents. The loss of even one life is one life too many, and we need to create as much awareness as possible on road safety. The advertisement is in fact not a National Road Safety Council advertisement, but a joint campaign between Accident Compensation Commission, Fiji (ACCF) and Land Transport Authority (LTA). I urge everyone to take personal responsibility for road safety and prevent the unnecessary loss of lives, and injuries on our roads. Parvez Akbar Accident Compensation Commission, Fiji

The northern town councillors have decided to reduce green garbage collection from the regular weekly routine to a monthly basis saying that they want residents and ratepayers to use their green waste to make compost for their gardens. Excuse my ignorance but how many ratepayers in Labasa have gardens and why are they being forced to make compost? Instead of providing a solution I believe these northern councillors are creating a huge problem. No doubt piles of green garbage will be visible all over Labasa and it won’t be long before this decision will be reversed to the weekly routine. Only gardeners and farmers will turn green garbage into compost, so I don’t see how urban dwellers will find the time and effort to do so. Simon Hazelman Rava Estate, Savusavu

The press release by the Minister for Health, Dr Waqainabete on the Sunday evening news (16/02) was in my opinion after the proverbial horse had bolted. With such a sensitive issue such as the coronavirus, I believe Government must learn to involve the people from the start and maintain regular public briefings to avoid rumour mongering such as that involving the Navua Hospital. I believe this is a basic tenet of a government fully engaged with its citizens and developing a class of informed nationals who react responsibly to its government’s plans and policies. Emosi Balei Kini St, Suva

Debate on the use of Fiji Hindi rages on long after the first Regional Hindi Conference was held in Suva. There are people on both sides of the divide passionately defending or opposing the idea of using Fiji Hindi on our national radio channels. I believe Riyaz Sayed-Khaiyum, chief executive officer of FBC has given his side of the story. Not necessarily acceptable to all. I view Fiji Hindi as a wonderful lingua franca for the people of Fiji as it has evolved from some undeniable historical facts. It has its origin in the arrival of indentured labourers from India to work mainly on sugarcane plantations and to build infrastructure for communication. They came from different parts of India and spoke different languages. As a tool for survival they evolved a new communication system in which many dialects were blended for communication purposes. Fiji Hindi we have today is a beautiful evolution of that effort and it is here to stay. There is so much ease and so much flavour when you listen to it spoken in homes, workplaces, market places and even in social gatherings. Even some slang and swear words have become part of Fiji Hindi and it is best avoided on our national radio and television channels. Some finesse and discretion is expected. Those who are worried that standard (shudh) Hindi may be replaced or digested by Fiji Hindi are sadly mistaken. Standard Hindi will continue to be taught in our classrooms and be used on formal occasions. Our students will continue to sit external examinations at different levels and so standard Fiji Hindi will continue to flourish. And as long as Bollywood films keep coming to Fiji there is no danger of India-Fiji Hindi link dying. Furthermore, those who are interested to preserve and upgrade their Hindi on par with India should encourage their bright scholars to go to India for Hindi studies or to pursue Hindi studies at the University of the South Pacific May I request university linguistics department to carry out research to find out how exactly Fiji Hindi evolved. Dewan Chand Donu Place, Namadi Heights, Suva

Thank you Mohammed Imraz Iqbal (FT 17/02) for your hilarious letter. It’s also very eye-opening for those who want to advance Fiji Hindi. If this is what they want to instil in future generations, then God help. Ajay Singh Lautoka

What is the underlying fear if people gather or march peacefully to mark significant occasions, raise awareness or voice their concerns in broad daylight? With adequate security and formal permission, what could possibly go wrong? Mohammed Imraz Janif Natabua, Lautoka

I have a vision of a Fiji where everyone speaks the common indigenous dialect. The future will certainly be different. The time to start that change is now. Dan Urai Lautoka

Jerry Tuwai was expected to take out the Fiji Sportsman 2019 Award. For the Sportswoman Award, it was the first time for me to hear an athlete named Moana Wind. Ilaitia Bose Suva

This is my first trip to Vanuatu and I have seen first hand how some people struggle. In Fiji we are fortunate with so many vegetables and root crops, most of the people don’t value those vegetables. I struggle to find fresh vegetables, even simple things such as cabbage cannot be found. I met some local people from Fiji and the bula smile just helped a lot. The former Fiji residents shared food and water. Most people drink bottled water in Vanuatu but back home so many thousands of litres of water is lost through a burst waterline. After my experience I learnt to value simple things in life. Narayan Reddy Vanuatu

Before the millions spent on redevelopment of Nadi airport, there was a professionally built “bure” shaped gatehouse at its entrance. During the development, I believe the bure-styled gatehouse was removed. Today if you drive into the airport, on the left you see a temporary tent occupied by police officers. Can AFL explain why the gatehouse was removed in the first place? Dan Urai Lautoka

Congratulations to the Fiji 7s coach for becoming the coach of the year for 2019. By the end of this year or just after the Olympic Games you could become the best 7s coach in the world. After listening to your speech I am sure you won’t be running away like Ben Ryan did. Sukha Singh Labasa