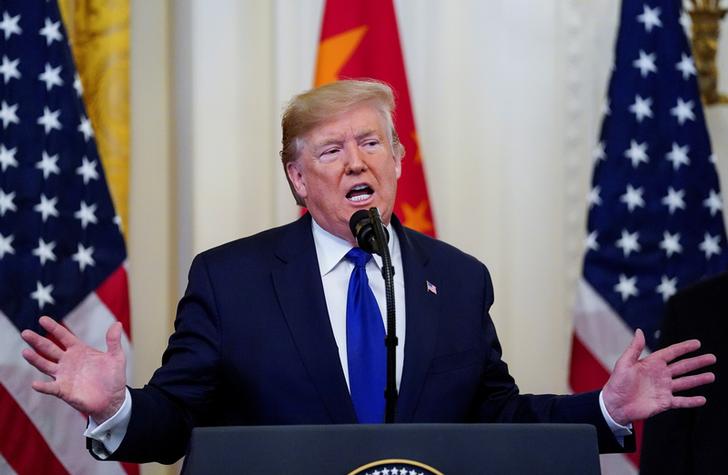 U.S. President Donald Trump speaks prior to signing "phase one" of the U.S.-China trade agreement in the East Room of the White House in Washington, U.S., January 15, 2020. REUTERS/Kevin Lamarque?

The 45th US President Donald Trump was the third in history to be impeached for breach of office. However, he was acquitted a few days ago and I believe this could turn his fortunes for the upcoming elections. RAYNAV CHAND, Nakasi

Trouble on our roads

Accidents (small and big) are a daily occurrence on our national roads. Serious injuries or even death happen, leaving families and communities traumatised. The Land Transport Authority (LTA) and the police have constantly advised drivers and pedestrians to be safety conscious in their daily lives. Schoolchildren are taught to follow road safety rules. Students and teachers on road duty in the morning and at the end of the day are doing a splendid job in ensuring that children disembark or embark the school bus in an orderly manner. The LTA has built road humps to ensure that passing vehicles slow down near schools to ensure that there are no accidents. Traffic signs and roads are clearly marked to avoid any confusion. However, despite all this, accidents still continue to happen. How often have we heard that drivers drive under the influence of alcohol or use mobile phone while driving? There is a tendency to behave as if they will never be caught. But these irresponsible drivers do cause carnage on our roads. In heavy traffic the attempt to beat the other driver is a very sick mentality. Should not the public report on such drivers? Yes, they should! I am of the opinion that drivers caught driving under the influence of alcohol should be banned from driving for life. I believe such harsh penalties will give us safer roads. Dewan Chand Donu Place, Namadi Heights, Suva

This question is intended for all politicians in Government. If a worker is on a three-year contract, will a bank facilitate loans to build or buy a house? If the answer is positive, please indicate which banks. Unions negotiate collective agreement with employers where a working life lasts up to when a worker attains either 55 or 60 years of age. Banks do give home loans to workers under such condition of employment. Dan Urai Lautoka

Man despairingly searching for freedom But is man really free? In his own mind, he can fly On the wings of freedom So long flight remains within the mind No problem! Once the flight ejects out of mind Freedom’s guardian chokes And throttles its essence out of wind Freedom gets crushed to a thousand pieces But Man clinging desperately to each fragile piece The broken wings of freedom trying to fly again Believing he will find freedom somewhere, somehow, sometime Craving for freedom to live in freedom Still longing and aspiring for the ultimate freedom Nothing more precious to him than freedom Bhagwanji Bhindi Nasinu

I literally laughed when I read the letter “pipeline thing” (FT 14/02) but then if that was supposed to work, we would not have had to operate so many pipelines which I am sure by now is in devastation mode with so many things in it. Maybe the “Minister for Pipelines” is already in the so-called pipeline. Kirti Patel Lautoka

The indiscriminate and/or inadvertent unnecessary excessive use of weedkillers/weedicides, in my view, by our “not-too-learned” users concerned in our municipal council, needs to be brought to immediate attention. And corrected, forthwith. These weedicides inevitably find their steady way into our food chain through long-winding drains, creeks and rivers into our beaches, seas and oceans. Wailoaloa and Newtown beaches in Nadi were full of kaikoso (shellfish), dairo (sea cucumbers), seaweeds in the 1950s to early ‘70s. They have since totally disappeared. Why, I ask? Much adult education with greatest urgency is needed to curb this long established practice with much harmful effect, ultimately.
Initially, our learned municipal councils with defi nite oversight from Ministry of Agriculture is a sheer necessity. How do we effectively control proper application
and use of weedkillers? RONNIE CHANG, Martintar, Nadi

THE other night during a family gathering, it was revealed to us that three primary schoolchildren from our community had to walk from the Suva bus stand to their home simply because the driver refused them entry into the bus since their school e-ticketing cards had insufficient funds. These poor kids had to tolerate the extreme heat of that day walking home. They walked from the Suva bus stand to Cunningham via Walu Bay and up Reservoir Rd and further along Princes Rd until
they reached home. The story broke my heart. I’m really disappointed at the bus driver for not even having any heart and concern at all for these poor kids. A lot was at risk for these kids especially their safety! I’m more disappointed with all adults inside the bus that never took responsibility when these kids were refused entry into the bus at the first instance. Isa Viti with these types of attitudes, where are we heading to? ALIPATE TUBERI,Old Cunningham Rd, Suva