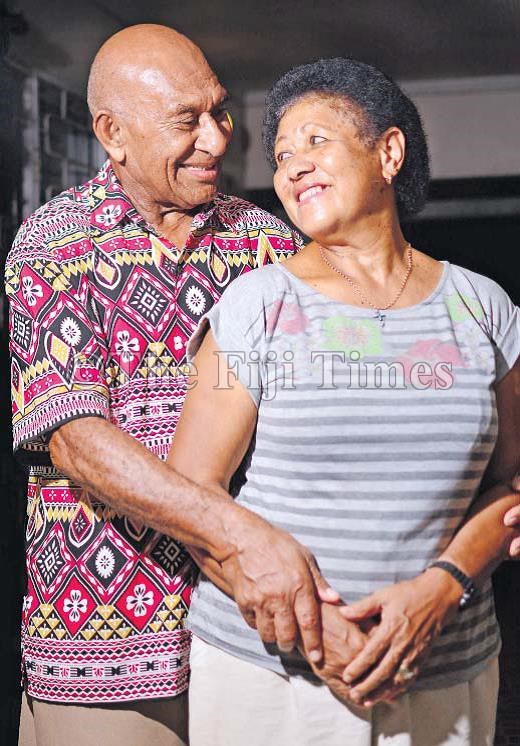 I was delighted to see Pita Nacuva make the front page of yesterday’s The Fiji Times on the occasion of Valentine’s Day and then reading the article brightened my day. Pita Nacuva is no stranger to Fiji having been a passionate sportsman and of course having rugby in his blood. He has served as Speaker to Fiji’s Parliament House and has served our Parliament as a minister. Indeed, Pita is a true Fijian statesman and politician. I was privileged to meet this down to earth gentleman on the occasion of The Fiji Times 150th birthday celebration and he was quick to introduce his beautiful spouse to me. We shared a lot about sports and politics and I marvelled at the depth of knowledge that he had and I wish I had more time to spend with the learned gentleman. He was quick to crack jokes and made sure our conversation was lively. Hence, reading Mereseini and Pita Nacuva’s story made it clear that age is no barrier to any form of celebration. Mereseini Nacuva’s words, “Couples should be reminded of our human need which is genuine love and acceptance, of a vibrant relationship which cannot be substituted with materialistic wealth”, drew my attention and I believe we need to pay heed to her message. Another line that stood out was, “Love is a precious process between two imperfect people who consistently need to make the necessary assessment/ adjustments/ alignments to protect their relationship and vows.” As Fijians celebrated Valentine’s Day I’m positive that the nation will work hand in hand to make lives better for women. The true meaning of Valentine’s Day must be taken rather than its commercialised purpose! Thank you The Fiji Times for wrapping up Valentine’s Day with a sweet article from the Nacuvas! Rajnesh Ishwar Lingam Nadawa, Nasinu

It is not enough just to observe the needs of the people we see and meet. We must care enough to do something about it. We must be willing to make enormous sacrifices, giving up things to make a difference in somebody else’s life. To make a difference in someone’s life you don’t have to be brilliant, rich, beautiful or perfect. You just have to care. DHARMENDRA KUMAR Rewa St, Suva

As a usual Sunday morning routine, I woke up early and after getting on with my usual tasking, I sat in my porch with a nice hot cup of coffee with a copy of my The Sunday Times. As I was enjoying my cuppa and the latest news of The Sunday Times, my attention was diverted to a group of youths who were standing in front of a church. It was the noise that caught my attention, however, what caught me by surprise was the alcohol in the hands of these youths whilst all were staggering and barely able to stand on their feet. This sight triggered a thought within me of how we grew up seeing as to how well the Sabbath was being observed by the people of this nation. Even starting up a brushcutter on a Sunday was a taboo as it was a common understanding that this day was for people to spend family time and indulge in devotion and at the same time giving rest to the body. However, this has changed over the time I believe because what I saw on that Sunday morning was no way near what we were used to seeing while growing up. It is indeed a very sad sight to see the principles and values of Christianity which has been our pillar of recognition for decades now fading away. I urge everyone to take a look back at where we came from and then to foresee the future by focusing on our today. We are definitely deviating from our path and it is now that we have to steer our ship back into the right track before it’s too late. Amrit Lal Suva

I lost my joint TIN and FNPF card so I had to go to town after work to make a new one. I sat at the counter and the first question was, “Did you bring your birth certificate?” It was nearly four and I had to run to the Birth Registration Office to print my BC. I was charged $10.90. I quickly walked back to the FRCS office with my BC. After filling my documents, I then paid $10 for my new card. Just a reminder to all of us, we have to keep our IDs properly or else you will have to pay $10 for every office you enter. Suliasi Cakautabu Ra

What, there will be no more freebies, Dan? Oh my goodness. Oh but wait, it comes around at the end of four years. And then we make an austerity budget and pipelines lengthen even more. But as Sukha had suggested, hose pipes will be a bit weak, next time around it has to be stainless steel pipes. If they are still around, that is. Allen Lockington Kava Place, Lautoka Reviewing ban We read in The Fiji Times (10/2) that the Ministry of Fisheries “will review the ban on exploitation of beche-de-mer in May, 2022 after the completion of the five-year restriction placed on the species”. What about the ban placed on Fiji historian Professor Brij Lal and his wife Dr Padma Narsey? Any review of that by anybody? Does their ban have any time frame like the one placed on beche-de-mer? Rajend Naidu Sydney, Australia

The recent article by John Kamea (FT 12/2/20) on the Lapita site at Natunuku follows from a previous commentary by Matilda Robinson published in November last year entitled, ‘Evidence of early Fiji’. Both articles mention Elizabeth Shaw who was relieving director of the Fiji Museum in the late 1960s. A key issue in both articles is the dating of archeological sites using radiocarbon (C14). Although radiocarbon dating was routinely applied by archeologists since the 1950s, scientists are now more cautious in accepting results at face value. The Natunuku charcoal sample submitted by Elizabeth Shaw was processed by Gakushuin University in Tokyo, which unfortunately did not follow certain protocols and often produced results at odds with those obtained from other radiocarbon laboratories. The suite of early Lapita-era radiocarbon dates currently indicates that Fiji was settled probably no earlier than about 3000 years ago, or 1000 B.C. This is consistent with radiocarbon dates from other early Lapita sites in the southwest Pacific, suggesting a very rapid dispersal of Lapita people out of the Bismarck Archipelago of PNG (where Lapita pottery appears somewhat earlier). Although the Lapita ‘type site’ is the anglicised name of a site in New Caledonia, Lapita pottery was in fact first discovered in New Britain, also in PNG, in the first decade of the 20th century. Subsequent findings across the region, including western Polynesia, suggested a community of cultures spanning the European divide of ‘Melanesia’ and ‘Polynesia’. Matilda Robinson had earlier reported that people ‘gradually moved inland and built forts’. This is somewhat simplistic. Radiocarbon dates, along with oral traditions, support the view that hill forts did not emerge until much later in Fiji’s past, several centuries after Lapita pottery disappeared. Current evidence points to the construction of large hill forts and major population movements inland beginning about 300 years ago. Her article concluded with the statement that the ‘Lapita people are credited for being the first humans to colonise the western tropical Pacific Islands’. This is only partially correct, as human communities were already established in mainland PNG, the Bismarck Archipelago, and parts of the main Solomon Islands chain at least 30,000 years ago, during the last Ice Age. On present evidence, ‘Remote Oceania’ (the islands east and south of the main Solomon Islands chain), including Fiji, appeared devoid of human habitation before the appearance of Lapita. Paul Geraghty and Frank Thomas University of the South Pacific, Suva

An Australian asked me how is your Fijian democracy going? I replied with a smile. He continued the day I see both Fiji Sun and The Fiji Times available in your national airline, it is a sign things are improving. Dan Urai Lautoka

The recent increase in the frequency of CEOs resigning for personal reasons is to use a common government adjective — unprecedented! Isa lei ko Viti! Kiniviliame Keteca Nausori

Well the money man has called it a day. Who’s next in this topsy turvy journey? There should be no surprises if a minister follows. Dan Urai Lautoka

Fiji Revenue and Customs Service (FRCS) chief executive officer Visvanath Das has resigned from his position effective Friday last week. Mr Das cited personal reasons for his resignation. It’s none of our business to question his resignation simply because we cannot do anything about it. Mr Das moves on, FRCS appoints another CEO and moves on, and we the public need to keep our mouths shut and move on! Let’s just respect Mr Das’ decision and thank him for a job well done. Simon Hazelman Rava Estate, Savusavu

Let me get this straight. After two “successful” elections, FEO decides to stringently follow the law from 1975? They decide to do this at a time when it costs voters more than double the amount it would have then, if FEO just followed the law from 2014. Samuela Savu Farm Rd, Nakasi

The spanking brand new, yet to be opened Laqere Market has close to 40 drain pipes or more, from the roof directly into drains. Has anyone thought to capture all that rainwater to recycle? It could be stored and used to clean the market at the end of the day or better still used for the “public convenience”. Maybe those gentlemen like Allen and Kirti who are well versed in Fiji’s “pipeline” sagas could shed some light on this. Tania Shepherd Nakasi

Some thought life was going to get easier, now slowly all coming to surface. “Nothing is free”. Kirti Patel Lautoka

From the current feedback, I guess the voter registration could decline. “Oi! You registered yet? Sega… pass mada!” Don’t be shy. Nigel Fiu Owls Perch, Lautoka