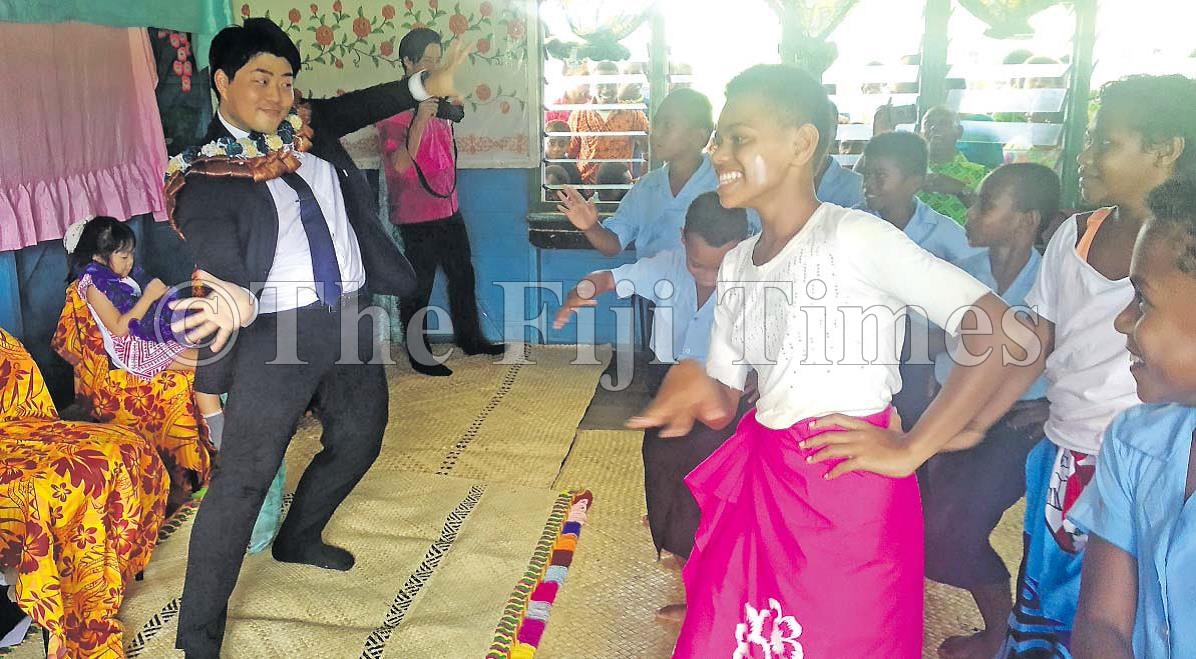 A letter writer says most men in suits should take their cue from Hirotaro Ohira (left), the second secretary of the Embassy of Japan seen here dancing with students of Ratu Emeri Catholic Primary School. Picture: SERAFINA SILAITOGA

Usually, men in suits have a sombre look, but not for the second secretary of the Embassy of Japan (p.21 in yesterday’s Social Times). He embraced the moment and visibly enjoyed the merrymaking with students and parents of Ratu Emeri Catholic Primary School after the opening of the new classrooms. I believe most men in suits out there should take their cue from the young second secretary and enjoy themselves once in a while. Looking at the picture with onlookers peering through the louvre blades and door, the opening will be one to remember, and yes, they won’t forget the Japanese man who danced with them. SAILOSI NAEWE, Naduru Rd, Nausori

Thank you The Fiji Times (FT 12/2) for your story on Indonesian cafe worker Rudi Hartono, who struggled to persuade fellow residents to follow his example and pick up rubbish on their streets. But when he dressed up as Spiderman and picked up rubbish, the response was overwhelming. The public joined into “help” spiderman and it also put a spotlight on the waste issue nationally. I believe this would work wonders in Fiji. Imagine if Spiderman, or Batman, or Captain America, or Ironman, or Hulk, or Flash, or Superman picked up rubbish left on the Veiuto or Nasese beachfront, youngsters would go out in droves to help out. I have this T-shirt which has all the superheroes above plus Jesus in white on the front with the words — “and that is how I saved the world”. When kids are around, I wear it and it loosens their tongue making them talk about anything and everything. Now should you think that it is blasphemous, I must reassure you that I have a direct line to the man in white and he says that it is OK to do this. Korina Waibuta Knollys St, Suva

One only needs to visit islands in the Fiji Group where there are no mongooses to understand the extent of destruction the fleet-footed cunning mongoose has caused Fiji’s flora and fauna. The concern raised in 1960 in the “Back in time” article by John Kamea (FT:12/02) of the catastrophic effect of the mongoose on our flora and fauna, is more of a concern now than ever before. As a small-time poultry farmer, dealing with mongoose is a daily struggle. Not only do we have to protect eggs and newborn chicks in caged pens, but we also have to set a good number of traps. If one sets 4-6 traps a day, one will be sure to catch 4-6 mongoose a day, everyday throughout the year. The two main islands are infested with mongoose and its getting worse. Here on my small poultry farm, a nephew who was helping out one day came up to me saying that mongoose were some of the smartest animals he knew. He went on to explain that he had seen four mongooses standing in a line, passing chicken eggs to each other from the top of the laying pen to the ground! The mongoose most certainly know their purpose! Simon Hazelman Rava Estate, Savusavu

There has been a suggestion on Facebook that when our government ministers travel overseas for them to use the Uto Ni Yalo. If we can do that, then we will be well on our way to achieving our goal of Fiji becoming carbon neutral by 2050 and set an example of fighting pollution, global warming and the like. We will certainly be climate change champions. Allen Lockington Kava Place, Lautoka

AFTER advising journalists (not an easy profession) to ask bus company owners (not easy work) pertinent questions, the Fijian Competition and Consumer Commission CEO (not an easy role) raised a pertinent question himself to the journalists. “To clarify and tell him who they classify as poor (not an easy life)?”. Irrespective of the seven cents (too less for some and too much for others), it is a difficult question. There is one certainty in this debate. The opposite of poor is rich.

Sukha has once again asked a brilliant question … this time it’s about a bridge in Labasa (FT 11/2). Now a question, how did they do it for only $4.5 million? Compared with a swimming pool that increased twofold in costs and is still not finished and weeds are growing over it. If the builders are correct and it will last for 100 years, why aren’t the same builders making our other bridges and roads and footpaths? Man, we will have roads like the ancient Romans did. Sukha, could you please check if there are some Romans in that construction team? Allen Lockington Kava Place, Lautoka

Brilliant and comprehensive performance Prodigious display of forceful power Dominating and powering determination Shredding the opposition to pieces Mesmerising everyone with their magical skills and talents Unpredictable tricks and tactics bamboozling the opposition Displaying tactical and mental superiority Controlling and dominating all aspects of the game Their mastery of rugby skills casting a spell Showing courage in the face of adversities Never wilting under the huge pressure Shedding blood, sweat and tears for their nation Sacrificing everything to prove everyone wrong Ruthless display of passion and desire to win Playing the game of their lives Punching holes through the toughest of defences Display of flawless attack and defence Their fighting spirits inspiring us to de better Creating moments of happiness and ecstasy Champions conquering everything To remain champions forever This is our champion Fiji sevens team. Bhagwanji Bhindi Nasinu

Time and again the people of Fiji experience water cuts or at least low water pressure. I believe the key reason being the infrastructure is ageing and the water systems do not have contingent layouts. I believe the average household water bill is less than $30 for the entire year (based on WAF’s average household usage of 400L a day) which makes it less than 8 cents per day. Nothing gets cheaper than that. If doubling the water rates can mean a more consistent and safer supply of water, I think that should seriously be considered during the review by FCCC. The increase in water rates should be tagged to commitments from WAF to improve its services through investment in infrastructure. If we keep the rates as low as they are, the service will be just about as low. Kiran Khatri Helsen St, Samabula North, Suva

Our column has been inundated with ongoing concerns and that pipeline has absorbed the blame. I ask for sympathy. This is after a lengthy medical diagnosis. That pipeline has been suffering from bad health for many long years. Constipation. Mohammed Imraz Janif Natabua, Lautoka

The GCC building is in the mystery pipeline now. I believe the hosepipe as suggested will be bit weak to handle the pressure. Kirti Patel Lautoka

Uncle Allen and uncle John, don’t know John but the cuzzies that they are; would not engage in plagiarism, Mr Fiu. Perhaps it was theism — belief in the existence of a god or gods, specifically of a creator who intervenes in the universe. Intervention of their universe wherein comes their scribbles. Perhaps? If you think about it, after a barrel full of Vio Rd brown label at that too. Taki! MANOJ LAL PATEL Drasa Ave, Lautoka

It continues to sadden me, to witness that upon one’s passing, the emergence of opportunists from all directions, like hyenas to a carcass. Love, principles and ethics are being eroded. Karma please be gentle or like Scribe always say “na kalou sa raica”. Nigel Fiu Owls Perch, Lautoka

I believe the Minister for Agriculture is now telling farmers about Government’s inability to provide everything (FT 11/2/2020) and the need for farmers to fend for themselves by using the FDB. No more freebies. Dan Urai Lautoka

This Government may be claiming greater economic performance than previous governments but the big question is, “are they creating a sustainable environment?” Economic activity they describe is similar to our roads, looks great, feels good to drive on but when challenged with brutal conditions it crumbles under pressure. Another good example is the agricultural sector. The environment they created of reliance and freebies was their own creation, was it sustainable, not one bit. Time is a good test of this Government’s policies and decisions, if they leave a legacy worth remembering, time will tell. Sailosi Naewe Naduru Rd, Nausori