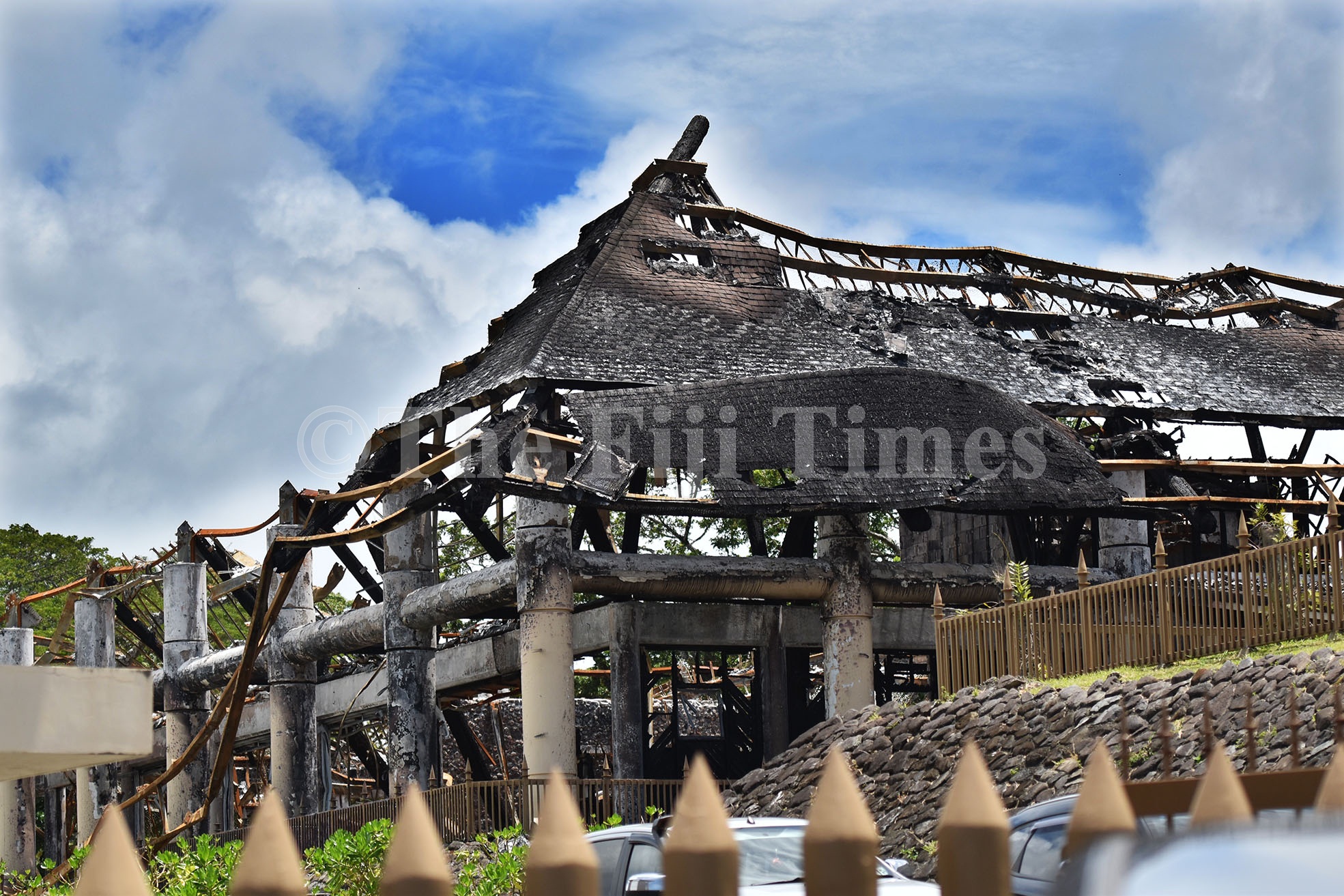 The GCC complex after it was destroyed by fire early Wednesday morning on December 10th last year. Picture: RAMA

THE charred shell of the former Great Council of Chiefs (GCC) complex looked really dreary and was called a cultural tragedy, which is a misnomer in itself (FT 11/02). Many iTaukei have mixed feelings about the rebuilding of this complex. Maybe if people saw the original plan they would understand why. It would be interesting to see what happens once insurance payments are received. KORINA WAIBUTA Knollys St, Suva

EVERY now and then a feel good story is printed in The Fiji Times. One of them is about the parents and concerned residents of Valovoni, Nacula and Nadogo villages in the interior of Saqani district in Cakaudrove who used money earned from kava sales to construct a school building. School manager Eparama Tainiciciwalu said the villagers decided to build the new school after requests for assistance to the authorities failed to materialise. Villagers of Valovoni worked on the new school building during the Christmas holidays. “For many years we have asked for help but nothing was forthcoming so we decided to build a school building,” he said. (FT 11/02) So you see, the people can help themselves, but only if they have finance and this is one is from kava sales. And of course with good sound leadership. Vinaka Valovoni. Students of Kabu kei Nailoca Infant School began classes in the new learning facility this year. Allen Lockington Kava Place, Lautoka

I REFER to your editorial “Our frustrating roads” (FT 18/01). Assert the queues can be alleviated to some degree by adopting the below measures: q Commandeering the third lane for traffic to Suva during morning peak hours and to Nausori during the afternoon after the appropriate public communications to alert the driving public. q Since police are already at crucial traffic points, they will help enforce this arrangement. q Urging slow drivers to move over to the kerbside lane(s) unless overtaking and bus drivers to be fined if blatantly negligent and obstructive to free traffic flow at the bus stops; and q Something needs to be done to drivers who are inconsiderate in not driving according to the traffic conditions and drive in a way that sets up isolated pockets of congested traffic especially when they are hogging the inner lanes. To some degree the congestion is because of inconsiderate driving and not actual lack of road space. Let us adopt the above and see what relief that will bring and with that experience the way forward to more relief may be gleaned. As for the FRA and the road conditions, how is the hundreds of millions it is allocated spent. All comes back to the Government we have not been open enough. Finally, it beggars belief that for however long they have been patching up roads these maintenance crews cannot seem to figure out how much coal tar to fill the holes with so when it is compacted will leave a flat patch rather than bumps. It is not rocket science. My last suggestion that these road contractors use a bigger and heavier driven road compactor rather than the cheap, light and pushed vibrating ones they currently use. While the pushed vibrating ones is good for the contractors hip pocket in the perpetual work and re-work they are doing, it is not good for taxpayers value and certainly not for the drivers with the bumps they leave behind. It is just plain logic, the more firmly compressed they are the longer they last. It is not rocket science. MAREKO VULI Nakasi

After recording two impressive wins and scoring a record of 12 goals the Anand Sami coached Lautoka soccer side will be leaving our shores for the OFC Champions League in Vanuatu. The Blues are on song and with the new recruits and an experienced coach they are set to sail against home-side Malampa Revivors, PNG’s Lae City and Henderson Eels from the Solomons. The Blues also received a timely gesture from FFA and Vodafone which should boost their chances of securing a play-off. Lautoka last played the final of the OFC Champions League but lost to Wellington City. Anand Sami in an exclusive interview with this newspaper said he was not leaving any stones unturned as they prepared to face a fired up Malampa Revivors in front of their passionate fans. The boys will be representing Fiji and the sugar city and they need everyone’s support and I’m sure fans will wear blue on Saturday when the Blues take the field. I’m sure that my friends from Lautoka Wise Muavono, Allen Lockington, Rouhit Singh, Abdul Israaz and Narayan Reddy will have a sosoko mix to cheer for Lautoka. Finally, a massive congratulations to my good old friend from Ba Master Timoci Seru and his Ba Youth team for winning the 2019 Vodafone U19 Youth League after defeating Labasa and Rewa during the playoffs in Suva. Job well done boys! Rajnesh Ishwar Lingam Nadawa, Nasinu

I believe it was the FF government that started the dependency culture in Fiji and the people said, “Let’s just go to government, they will provide”. Now the Agriculture Minister says: “We can’t help all of you.” Sunil Kumar Lautoka

I said, isa, when I read that the Minister for Agriculture said government cannot help everyone. (FT 11/2) Sure, there are many in the community who do not wait on government, they just get on with life. But his reply that government can’t help everyone makes me think about the amount of money that was given out (not freebies, according to them) prior to the elections, where did that money come from and how come they had such big hearts back then to give away that much money that people didn’t earn. Now when there is a genuine need and the people cry out for help they are told, “We can’t help all of you”. Sigh. Allen Lockington Kava Place, Lautoka

I wish to ask the good Minister for Agriculture if getting a loan at FDB is as easy as he thinks. (FT 11/02). Maybe he could try and tell us via this forum. Mere Lagilagi Raviravi, Ba

Can my yanu Allen Lockington please clarify how long is the pipeline that has the answer about the Lautoka swimming pool project. I got a long measuring tape that my yanu can use to measure the length of that pipeline. John Brown Drasa Vitogo, Lautoka

One way of doing things faster would be to remove the pipelines and put the things in a hosepipe. Sukha Singh Labasa

I believe the value of a man is determined by the price he accepts beyond his capability. Dan Urai Lautoka

Well! Looks like my cuzzies Allen and John either had a talanoa or they can read each other’s minds, judging from their letters on the FijiFirst slogan. So I wonder who is going to claim plagiarism from whom. Nigel Fiu Owls Perch, Lautoka Drainage I believe the drainage in front of the two Nadi iconic landmarks, namely the famed McDonald’s and the Nalagi Hotel needs to be addressed as it’s at the Queens Rd and gets flooded due to poor drainage. Can the authorities please fix it as it’s becoming a common problem. Umar Billy Ali Namaka, Nadi

Indonesian President Jokowi Widodo on his Australia visit addressed the Australian parliament in his native Indonesian language, Bahasa and got a standing ovation (ABC news 10/2 ). And, in Fiji, elected MPs are not allowed to address the Parliament in the native Fijian language. Interesting, isn’t it? Rajend Naidu Sydney, Australia

I am willing to organise fundraising to help the Government climb out of its financial black hole. However, I have two conditions. No more loans and the PM’s overseas travel allowance to be reduced to $20 a day. I will start right away if these conditions are met. Gabriel Simpson Rakiraki