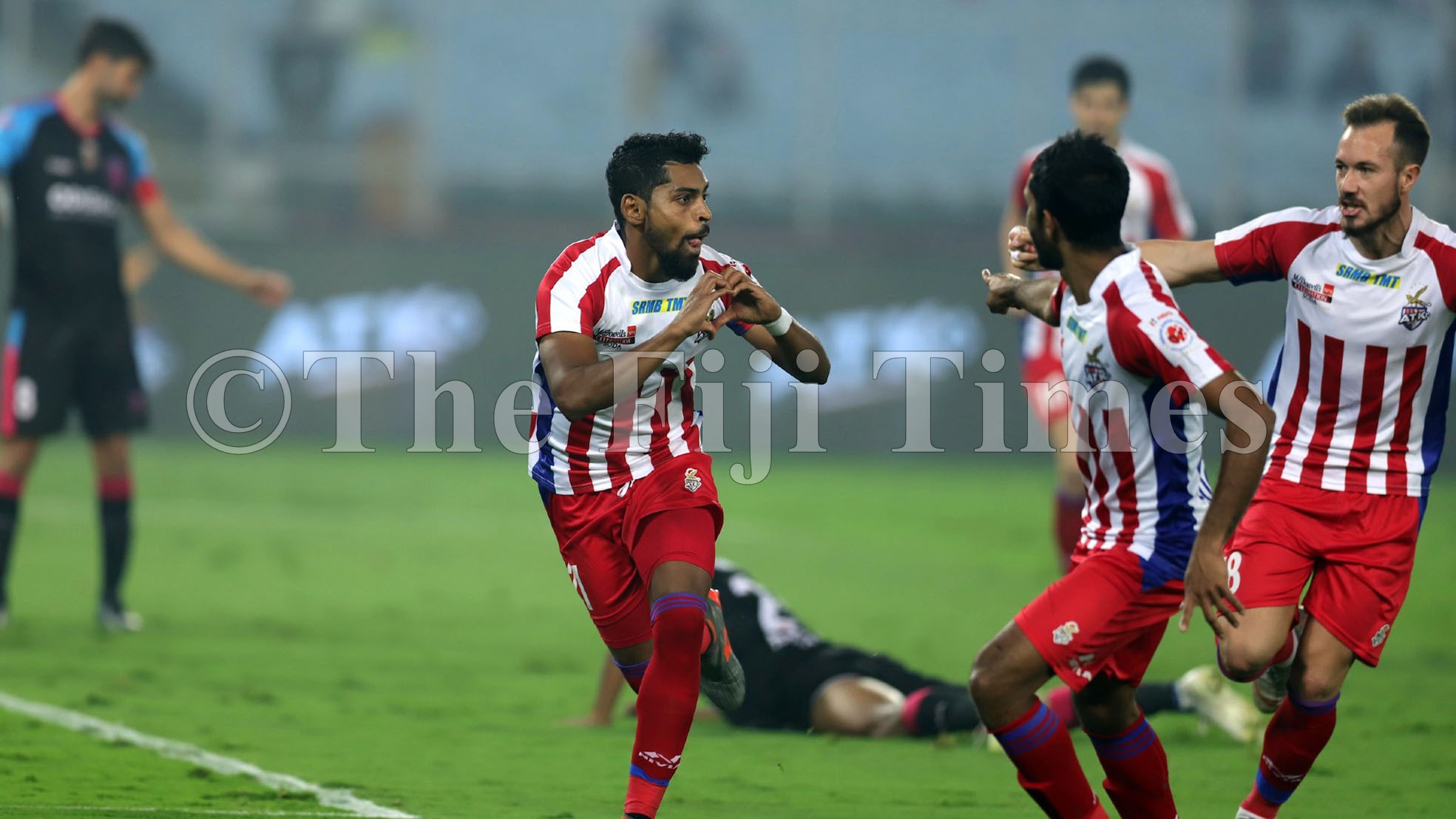 Roy Krishna celebrate with teammates after scoring a goal for of ATK. They thrashed Odisha FC 3-0 in an Indian Super League (ISL) clash at the Salt Lake Stadium in Kolkata on Saturday evening. Picture: SUPPLIED

ROY Krishna and his ATK FC were sensational in the weekend. ATK FC thrashed Odisha FC (3-1) in the Indian Super League (ISL) at the Salt Lake Stadium in Kolkata. After this win, ATK displaced Goa FC at the top and now leads the ISL with better goal differential. Furthermore, after scoring his first hat-trick for ATK FC, Roy Krishna has now netted the most goals for ATK FC in a single season and leads the goal-scoring chart. It is through Roy Krishna that thousands of fans have started following the Indian Super League and our wonder-boy has not let us down. Bravo Roy, and all the best for the 2020 season! RAJNESH ISHWAR LINGAM, Balgovind Rd, Nadawa, Nasinu

ONE thing is for sure, we who live in the West had lived with water cuts for so many years, that it became a part of our lives. We would get water in the morning and it goes off about 9am. Most homes have tanks or drums and bottles of water stored and ready for use when there is a water cut. Many of us have learned to bathe in 2 litres of water (well, I have). We don’t take bubble baths. Cooking and drinking water is stored hygienically — including water for grog. One terrible thing is when you have a house-full and there is a water cut and toilets have to be flushed. But like many of us, we have water stored for that. Now I read that Suva had a massive unplanned water cut and social media has been used for people to vent their frustration. I don’t blame them the government has to provide. That’s why people pay taxes. Jokes have been made and one that made me laugh was when someone posted saying that he was in support of the many people who hadn’t had a bath and he wasn’t going to bathe. As for me, I understand that our water infrastructure is old and I know that they will give-way because urban drift has increased the urban population and put a strain on the infrastructure. Our town and cities were probably planned for 50 to 70 years, and now we are running out of space. Just look at Nadi! My advice to everyone is to store water for at least seven days. Normal water cuts don’t last longer than that. (Knock on wood). ALLEN LOCKINGTON Kava Place, Lautoka

THE articles by Biman Prasad and Savenaca Narube on the state of the nation’s economy in Saturday’s The Fiji Times makes sober reading. I congratulate both gentlemen for articulating these issues in simple terms, with facts and figures, which us common lay-people can understand, these articles show such a grim state of the national economy. I guess, as is usual, we cannot expect any comment from the government and those in the know. One comment in Biman Prasad’s article, albeit intended in a light-hearted manner, that struck me was the PM’s carbon footprint as he crisscrosses the planet we keep reading about. Obviously, this can be multiplied many many times if one adds all the official trips of ministers and other government delegates, ironically to attend climate change meetings. Just to illustrate the hypocrisy of this, Fiji had one of the largest delegations, about 40, to the Madrid annual climate change conference in December. Even cost wise the total expenditure of this pilgrimage would be close to $1m for the over two-week event. It is good to read about the Minister of Forestry’s tree planting initiatives to at least offset part of these carbon emissions. What is even more ironical about this apparent huge contingent to try and steer the debate on climate change actions, when it mattered none of the delegations were there on the last two days when the stalled Madrid meeting made important decisions. It was left to two of the smallest Pacific nations — Tuvalu and Marshalls — to assist in a final decision on the oceans, for example. And we hear straight after the Madrid conference from chosen local media how Fiji’s leadership on this issue was instrumental. And we also have a chosen oceans champion who has been hand-picked to carry the oceans campaign for the government. Even he had departed, not that his contributions made the headlines even when he was there. The point is what Biman points out in terms of the self-praise and feel-good kind of statements being hyped, needs to be put into context of the reality that seems to be facing our nation, and the dire state of the economy. MANISH CHAND Suva

THE revelation that the iTaukei communities recorded the highest number of cases of violence against women and girls in Fiji (FT 07/02) is not only very sad but it just tells us a lot about how many iTaukei men treat their women. My grandmother always hinted to observe and learn from nature on how it is done with perfection. When it comes to respecting and caring for the opposite sex look no further than a rooster and a hen. A rooster will always ensure his hen is safe at all times and will protect her at all costs. A rooster will always ensure that his hen eats first before he does. He does it so well that he ends up with quite a few hens who all adore and admire his tentative thoughtful attitude so much that they follow him wherever he goes. I urge all men to observe the honourable respectful rooster to learn first hand what it takes to be a real gentleman. But as humans, please do your best to care for and respect every woman but court only one! Cockadodledoo! SIMON HAZELMAN Rava Estate, Savusavu

FIJI 7s win at Sydney was sweet with some scintillating rugby from our boys. That is one for the road, however, the bigger picture and road to Tokyo 2020 is still 165 days away and the challenge is not easy at all. Let’s not get complacent and enjoy the win as the road to LA and then Hong Kong, if it will happen, to defend our title for the 6th time will not be easy. The best is yet to come and the selection, diet, conditioning, training, talking and talanoa with lots of veilomani starts now. SHALWYN PRASAD Mukta Ben Place, Nabua

THE late Maciu Malo’s legacy continues. According to The Sunday Times, our late journalist had spotted Ratu Napolioni Bolaca during the Wadigi 7s tournament and had suggested that the young lad be given an opportunity to show his capabilities with the national 7s team. Bolaca’s father Apimeleki Nasalo paid tribute to the late Maciu Malo for his son’s success on the circuit and the late Maciu’s hard work is being rewarded as Bolaca was named the player of the tournament during the Paris and Sydney 7s. Bolaca has played 24 games for Fiji and has scored 11 tries and raked in 121 points. Eroni Tuinuku’s article in The Sunday Times is an inspiration to every rugby player who wishes to don the national jumper. Vinaka vakalevu Tuinuku and once again thank you for your passion and commitment as a journalist the late Maciu Malo! Finally, it was a delight seeing The Fiji Times photographers — Jonacani, Rama and Jovesa with their plaques during the Fiji Sports Awards nominees’ announcement cocktail. Rama covered the Hamilton 7s while Jonacani covered the Sydney 7s. There you go, our journalists are reaching top draw. RAJNESH ISHWAR LINGAM Balgovind Rd, Nadawa, Nasinu

IN our days when students were absent on school days, they were to get letters from home stating the reason which had to be signed by the parent(s). I am curious if that practice is still around today. If yes, I won’t be surprised if teachers receive absenteeism letters from students written and signed by the students themselves. MOHAMMED IMRAZ JANIF Natabua, Lautoka

OUR area received some wonderful rainfall in the weekend. Undoubtedly those who live in and around Nadi Town must be very relieved by the timely downpour as they don’t have to water their garden every day. Forecasters say there is more rain coming our way from this week as a result of looming tropical depression. That’s good news as far as the farmers are concerned. Of course heavy downpours also help flush the drains without any cost. We hope with the expected rain the humidity experienced will go away. Here, day or night the hotness is no different. Anyway, we welcome the rain. It’s quite relieving. SURESH CHAND Nadi

THE Labasa Town Council had its own fire station, had lots of workers to keep the town clean and was run by councillors. But now we have more workers in the offices. SUKHA SINGH Labasa

THE A-G astounded (ST 09/02)? I can’t believe it. With all the ministries he looks after, I would think nothing can astound him. ALLEN LOCKINGTON Kava Place, Lautoka