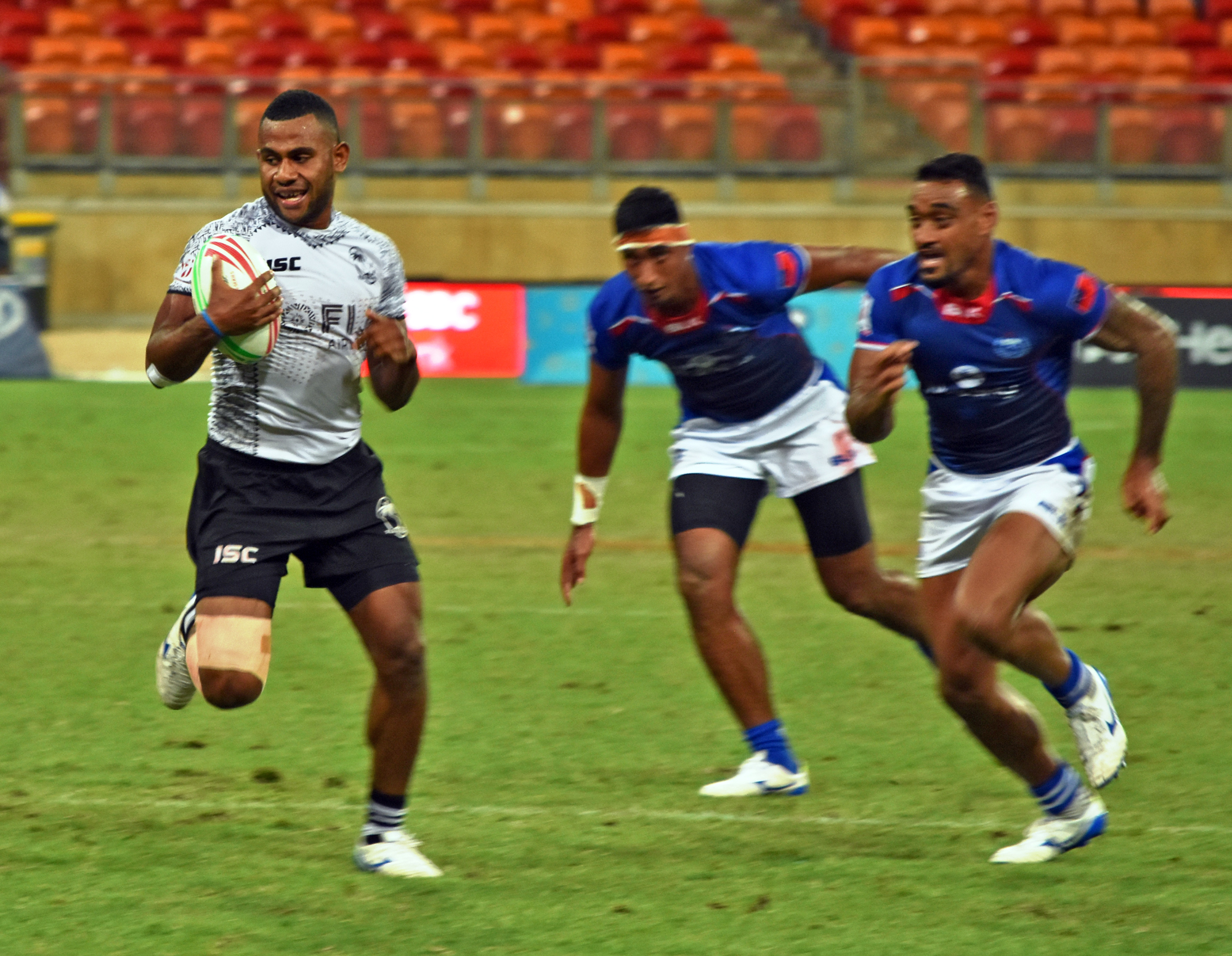 Strongest in the world

During Donald Trump’s State of the Union Address in the House of Chambers, he mentioned vaguely that the United States of America is the most powerful nation on this Earth. Everyone in the house stood up in applause. Can I ask the American Embassy in Suva to please send him a recording of the final match between our Flying Fijians and the American Eagles at the New Zealand Hamilton 7s to remind him that while the USA are powerful in many things, they still struggle against a very small nation in the middle of the Pacific in the game of rugby sevens! As Fijians, we all need to stand up and applaud our warriors for a feat that if compared with everything between our two countries, is like David and Goliath! No Trump, not in sevens! Simon Hazelman Rava Estate, Savusavu

I wish to add my comments to the backlash that the boys have been getting on social media after the red card and loss to New Zealand in Sydney. I believe we need to learn to lose. We need to learn how to accept defeat. We need to manage our anger. Losing is not the end of the world, champion teams lose, deal with it and move on, and become champions again. Please don’t expect our boys to be invincible, they are human. Even the mighty All Blacks have lost. I thank all the people who have stayed positive and encouraged the boys to take the loss and look to the future. Good fans support their team even when they are down, remember there is always a tomorrow. Furthermore, I would like to know if we have someone understudying Gareth Baber, who is doing a good job. New Zealand has Tomasi Cama as assistant coach for New Zealand, who knows he will soon be the head coach. Let’s move on, we are still a champion team. Iliesa Baravilala Moti Chandra St, Natabua Housing, Lautoka

Many are up in arms in protest over a proposed development at our Thurston Gardens! While there is a history to the site, there is also a very long future. If we are going to keep it as a botanical garden, then much work needs to be done to make it a real garden. Its current state is nothing but monotonous. So much is being said about it, but in reality nothing constructive is being practised. It sure says a lot about how closed-minded we are when it comes to change. While this proposed development has brought about many serious questions, there is one thing that stands out for sure and that is we need to be doing something about the gardens or else. Simon Hazelman Rava Estate, Savusavu

FIJI is at least using a star rating system for refrigerators and in terms of efficiency, it is a positive step. I believe what is not positive is the AS standard used for energy consumption. I know my refrigerators use far more than the kWh figure/annum shown on the unit. The Australian (AS) test does not specify the humidity used, has a freezer compartment temperature three degrees higher than other tests, does not load the compartments during the tests, and does not even take into account temperature rises when the doors are opened in use. The JISC Japanese standard allows for 35 refrigerator door openings/day and freezer compartment openings eight times/day. It is little wonder that our units use more power than stated on the labels. Of course the relevant authorities in Fiji may have more up-to-date information that I have. If so, they should comment. ALLAN LOOSLEY, Tavua

SOMETIME back there was an article on how one of our 7s reps turned down furthering his education at university to pursue his rugby career. With the new academic year about to resume for all young and old, there are some hard decisions that need to be addressed by those building rugby aspirants. What after rugby? Samoan midfielder Eliota Fuimaono Sapolu was suspended from all rugby for speaking out about the double standards meted out by World Rugby to tier 2 rugby nations. In an interview with Close Up- New Zealand, when Eliota was posed the question, “Do you understand that this could jeopardise and end your rugby career?” Eliota replied, “Yes, that’s why I studied hard”. TUIMASI LOTE MASITABUA, Nauluvatu, Suva

THERE are so many taxis in Lautoka that I have to watch my gestures. All looking for passengers — trawling. Now you lift your hand to scratch your head, 12 taxis will stop for you. ALLEN LOCKINGTON, Kava Place, Waiyavi, Lautoka

THE people of Suva have the advantage of tsunami warning sirens. So as soon as you hear the siren, go to high ground. Don’t wait to see if it is a test, drill, malfunction or what, just go, it’s the right thing to do. And to enforce this, just look at the pictures of the tsunami victims in Indonesia’s Sunda Strait. At least 222 people have been killed and 843 injured after a tsunami hit coastal towns and the numbers are climbing. Don’t go to the sea and wait and take selfies to see what a tsunami looks like, just go to high ground. You have heard your warnings, now act intelligently. ALLEN LOCKINGTON, Kava Place, Waiyavi, Lautoka

The Prime Minister and his Attorney-General say that Government aims for all Fijians to have legal representation within the first hour of arrest. Noble. How about attending to victims of crimes and patients in hospitals within the same hour? I believe the PM is fond of referring to his COP23 presidency. Self praise, self praise! Yet, the Ministry of Environment appears to be lost. I believe the litter problem in Fiji is reaching unparalleled levels. Yet another meeting. Yet more rhetoric. I can’t help but paraphrase — it’s difficult to hear COP23 this, unprecedented that, my government has done this, my government has done that —because the continued damage to the environment and the litter problem in Fiji is speaking so loudly! That is unprecedented! Kiniviliame Keteca Nausori

I have raised this issue numerously, and will continue to raise them again. The bus industry intends to make changes to the bus fare, and again I believe the very people who will be affected are not included in this discussion. Here we have the bigwigs from the bus industry, LTA and Vodafone all in a meeting, but they have yet to attend to things such as the narrow aisle in buses, poor customer service by some drivers refusing to take passengers who get off on the main road because they do not want to make changes on the machines during the rush hour in the evenings. Or even the condition of the buses, now I’m thinking most of these top dogs don’t use this mode of transport every day, but yet have the gall to make decisions about it, so what happened to serving the people of Fiji? But hey, what do I know right, I’m just the common man who suffers silently and hope’s for a better tomorrow. Lawrence Wara Suva

Kudos to the New Zealand 7s team for winning the Sydney 7s. That is a complete victory after beating a 5-man Fiji team in the semi-final. For the Fijians, they should always be vigilant because their complete rugby prowess in the 7s game will always attract bias not only among the other 7s teams but also the officials. The same tackle that Fiji was red carded for, was done by the New Zealanders against the English and the player only got a yellow card. To cap it off, I believe the same officials were officiating. I guess if you cannot beat a complete team, you can always count on the officials to help you beat them. As for the Fiji manager, I wonder whether he sought an audience with the Sydney 7s officials to lodge a proper complaint with video evidence to highlight the discrepancies in the officiating? For the Fiji team go forth and play your complete game always. Continue to attack hard and be solid in defence. Qaqa tiko Viti! Epeli Rabua Suva

The month of romance is back again on February 14. The Valentine treats, gifts and romance will perhaps be at all-time high in 2019. Arrows piercing the hearts and love is in the air. Let’s learn to express our love daily while we have the chance to. Life is so precious and who knows whether our hearts will be pumping come tomorrow. Floyd Robinson Nasinu

As we count the hours to the FRU Awards Night, some exciting news popped up about the possibility of Fiji taking part in Rugby X, which is the shorter version of rugby and which has been sanctioned by World Rugby. There is a high chance that the Flying Fijians will take on France, England, Australia and Wales. Now this is a classic opportunity presented to FRU to promote our rugby team and attract lucrative brand names. What say FRU? By the way, I’m predicting Nakarawa (15s player), Sau (7s player), Koli Sewabu (coach), Naureure (administrator) and Naitasiri (team) to walk away with the FRU Awards! Rajnesh Ishwar Lingam Nadawa, Nasinu

I am still wondering who will be listening to the pleas of the people in Nadarivatu regarding the bus services which ceased without any notification from last year? Government, LTA or whoever is listening and reading this message, please we need your help. Pita Soroaqali Nadarivatu

I was delighted seeing the name of Alifereti Veitokani, my favourite player, being nominated by the Fiji Rugby Union 15s for the Sportsman of the Year award. I have been all along writing and praising this boy from the delta of Tailevu as the best player in rugby of the modern year. Not only did he dominate the local scene but internationally also. My bet is on Veitokani as the “Sportsman of the Year”. Tomasi Boginiso Nasinu