Letters to the Editor – December 29 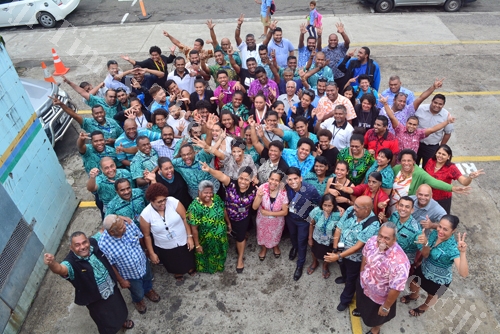 As we prepare to bid 2018 goodbye and welcome 2019, let’s not forget to dwell on the challenges faced by The Fiji Times this year. From open criticism to the long awaited court case that The Fiji Times finally won, our number one team powered on and broke all barriers and hurdles and came out victorious due to the passion, steadfastness, commitment, dedication and determination of the staff, editorial team and of course the ardent readers of Fiji’s longest serving newspaper. I have previously written and I won’t hesitate in writing again that The Fiji Times has a proud legacy and continues to do the job it is supposed to be doing and I’m positive that come 2019 the forces that undermine the achievements of The Fiji Times will realise that this newspaper is just doing what any neutral newspaper should be doing and that is being society’s watchdog. I’m looking forward to Monday’s edition of the 20-page lift-out titled, The year that was and I accord my appreciation to Fred and his team for the hard work! Rajnesh Ishwar Lingam Nadawa, Nasinu

Indeed time really flies as Christmas is history now although commercial advertisements and decorations still recognise the final days of December 2018 as the month of festivity. Soon we will be embracing the new year in style with only a few more days to go. Having said this, I am delighted to know (FT 28/12) that the awesome The Fiji Times team will be issuing on new year’s eve (31/12) a summary of 2018 which is a 20-page bond lift-out beautifully titled, The year that was. Some of the significant events that captured the front pages of this outstanding and renowed local daily will include the following: 1. The Royal cost of the Duke and Duchess of Sussex visit; 2. The Fiji Times court case; 3. Fiji’s historic victory over the French in 15s rugby; and 4. The Fiji Times’ Fred Wesley’s win at the 2018 News Media Awards in Australia and the list goes on. I can’t wait to get my copy soon, as life would not make sense without memories. Vinaka vakalevu The Fiji Times for making 2018 the year to remember. Have a great and safe weekend! SPENCER ROBINSON Suva

Water, electricity and internet providers cannot sustain the influx of family and visitors who returned to Savusavu for the holidays. Water and electricity shutdowns is a daily occurrence and the internet has reduced to a crawling speed! Savusavu is in dire need of substantial upgrade of all our utilities. One wonders if those responsible are gauging the cause? Indeed a festive season overload of everything! Simon Hazelman Rava Estate, Savusavu

Amidst the many resolutions, suffice to mention is Marist Sister Loyola Grehan’s life of persistent prayers that kept her going to the age of 100 (FT 28/12). We are dominated by non-communicable diseases as the editor Fred Wesley highlighted in the editorial comment. With such impeccable record, she stands out as impressive. Again, time waits for no one as impressed by Wesley. Couldn’t be truer! Amenatave Yaconisau Palm Drive, Delainavesi

Marijuana has medicinal value. It’s time Government reviewed its policy and allowed the controlled growing of marijuana for such purpose. I believe it may create a win-win situation for Government and growers. Smoking it should remain illegal. Dan Urai Lautoka

UNDER our constitution we are all Fijians by virtue of being bona fide citizens of Fiji. That is our nationality. However, that does not change our ethnicity. We will remain who we are irrespective of the attire we wear or the way we dress up. One can change his name or religion but not his ethnicity. As Fijians we all have equal status; nobody is greater or lesser. Once you are elected as MPs you are expected to represent the interest of all Fijians regardless where you are seated in the House or which area you come from. For you are there to serve the people. That is how it’s supposed to be under the open constituency system. In the past some of the MPs used to have their office in the respective towns where people could take up their issues. I believe every citizen has the right to approach any MP at any time if they need any assistance. All MPs should be approachable and accessible at all times. SELWA NANDAN Lautoka

The traditional greetings of “Happy New Year” on January 1 is mostly followed by the setting of new year’s resolutions, like stop smoking and more exercise for a healthy lifestyle. Unfortunately many of such inventions do not last until February. While it is easy to set unrealistic resolutions, we should seriously consider the realistic ones to maintain throughout the year. There are greater things to be achieved every new year and everyone must prepare themselves to be great, not by words of mouth, but by a lot of sacrifices. One resolution I have made and try always to keep is this — to rise above the little things. Let’s commit ourselves to maintaining good health for happy and healthy lifestyle. Plan ahead — it wasn’t raining when Noah built an ark. Tahir Ali Hamilton, New Zealand

I refer to Nardeo Mishra’s letter on Thursday, FT 27/12, on cashless society. And not forgetting at times funds accidentally get deducted even though declined by EFTPOS machines. Then there is the running around to banks for a refund. How reliable is EFTPOS? Amitesh Anand Prasad Nadi

During the recent budget announcement, motorists and other road users received the news with great joy as adequate funding was set aside for repairs and the maintenance of our roads. Previously the new road repair worked, but after a heavy downpour, went back to square one when potholes re-emerge causing discomfort to everyone. But recently the outsourced road repair company who are more technology driven, use road maintenance world best practice, thus putting back confidence in the public that work of such high class would provide better and longer life of our road surface. This would yield a higher return on investment as such upgrading by totally removing and resealing the road surface is an expensive project done by the experts. However, this cannot be said for the one kilometre stretch along the Queen Elizabeth Drive in Suva from the ANZ Stadium junction up to the police post. The surface was totally removed and resealed early this year and now there are countless potholes appearing which will deteriorate to future lovo pits because of the heavy usage of the road and the adverse weather. As a lay person, I believe that this shoddy workmanship must be investigated with the view to counsel and discipline the people involved including the people who recruited them. We just cannot be taken for a ride anymore and must be more responsible in how our tax money are used. Satish Nakched Suva

My heartfelt gratitude, thanks and appreciation to the police commissioner, director traffic and our hard working police officers for ensuring a safe festive season! Thank you for all the efforts sirs and madams! While we enjoyed with our loved ones, you sacrificed your family time manning our roads, picnic spots and towns and cities. Looking forward for the same on New Year’s Eve at the street parties! Rajnesh Ishwar Lingam Nadawa, Nasinu

My heartfelt sympathy and condolences to the aggrieved Dr Jiko Luveni’s family. Our madam Speaker of the Parliament would be well remembered and her treasured memories would be cherished in our hearts. God bless her great soul. Nelson Narayan Jinnu Street, Lautoka

don’t we give every prisoner a few days break in a year? Fiji is too small to hide so please prisoners, just stay inside the prison. Sukha Singh Labasa

I strongly object to readers’ recommendations to give policemen a bonus this Christmas for a job well done. It is their duty and responsibility to do their job at anytime be it Christmas, New Year or independence day. They must do their jobs. Increasing their salaries is more appropriate to improve motivation and morale of the police force while bonus is short of that. Government must look at their predicaments. Dr Joel Trazo Chadwick Rd, Nakasi, Nausori

I believe the LTA is making money through breathalyser tests. Good, it makes our roads safe. Can they also introduce grog and marijuana testing machines? I believe some drivers are grog doped and full throttled with marijuana. I believe LTA will make three times more money. A SHARIFF SHAH Savusavu

Facebook has revealed that many people speak fluent rubbish. Well, looking at what is being posted by some people. Allen Lockington Kava Place, Waiyavi, Lautoka

Dan Urai (FT 25/12) should realise that the decline in popularity is more acute with candidates than parties. I believe there is no accountability in making the whole of Fiji the constituency. Maybe it’s the system! Amenatave Yaconisau Palm Drive, Delainavesi