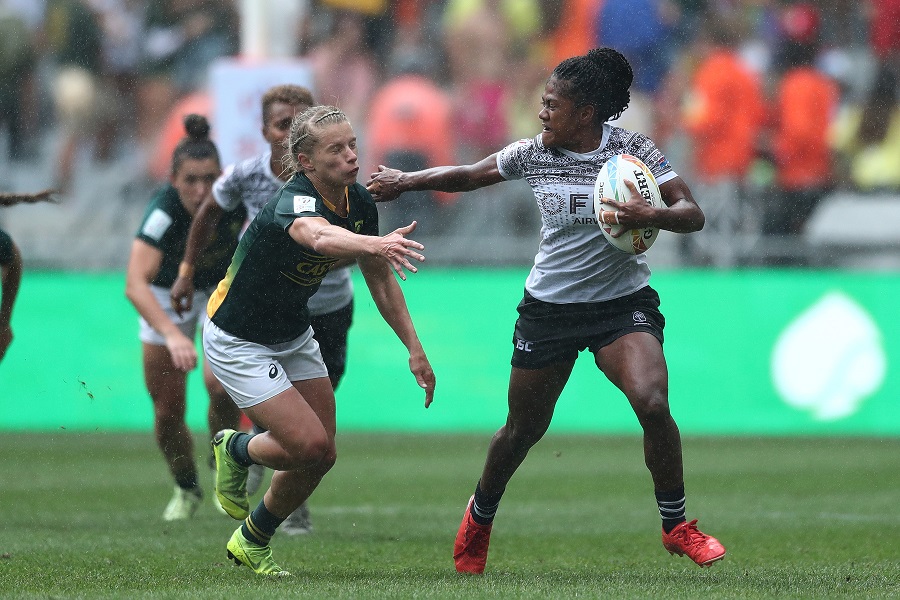 I COMMEND Saiasi Fuli and the Fijiana for the tremendous efforts in Cape Town. On the opening day, the Fijiana walloped Russia (38-19). On day two the girls narrowly lost to Dubai 7s champions NZ (12-10) and then handed the hosts South Africa a drubbing (27-5). The Fijiana faced Australia, who finished fourth in Dubai, in the quarters and a little more patience combined with financial support and resources should enable the Fijiana to reach the semis at least in one of the tournaments in the circuit. Finally, after the conclusion of day two Asinate Savu led the DHL Impact Player with five tackles, two breaks, nine off-loads and 15 carries and raked in 44 points. The Fijiana looks to have found lost rhythm and form. Go Fijiana! RAJNESH ISHWAR LINGAM Balgovind Rd, Nadawa Nasinu

ALTHOUGH not confined to our borders, potholes are an epidemic on Fiji roads. This perennial problem is closely related to the effects of rain. Those hollows could have been named roadholes. But they are potholes. Locals with a funny sense of humour have added their touch. The most iconic, lovo pit holes. Between visualisation and realisation, has anyone dared to test their culinary skills. However, not a single complaint has been registered from the animal world. After a downpour, they become miniature swimming pools and picnic spots. It is love at first sight for frogs. I heard a rumour. They have their annual carnivals in them when it rains cats and dogs. Despite being ideal bathing spots for birds, they are yet to decide on turning them into nests during the dry season. They could raise their families as most drivers avoid potholes. Because there are so many in areas, all cannot be avoided. Road accidents will occur. Neither will drivers face criminal proceedings nor are the birds eligible for compensation. Thus, the avoidance. But as humans continue to destroy their habitats, this dangerous option could be up for a vote in the near future. Those hollow speed breakers are also perfect drinking grounds for animals in the hotter and rainy periods which are commonly December and January. A drink sent direct from the heavens during the festive period. No need for purification or a vaccination program as it does not give rise to mass diarrhoea or skin diseases. Those animals will be most disappointed if I don’t mention climate change. In case water moves on to the roads during high tide in the near future, the receding tide may leave something back for enthusiastic anglers. Travellers will be adequately warned. Drive slow. Line and sinker ahead. In busy areas. No fishing allowed. MOHAMMED IMRAZ JANIF Natabua, Lautoka

BORIS Johnson’s victory in the UK parliamentary election means that UK’s (England, Scotland, Wales, Northern Ireland) departure from the EU is inevitable. Johnson said that the “UK will leave EU by January 31, 2020, no ifs, no buts”. Brexit or the withdrawal of UK from EU after June, 2016 referendum in which 51.9 per cent of the people voted to leave, has been long coming. The UK government had formally announced the country’s withdrawal in March, 2017, starting a two-year process that was due to conclude with UK withdrawing on March 29, 2019. Now it is Jan 31, 2020. We in Fiji have a lot to learn from this – the majority decides who is in power. While some may argue that democracy is a foreign flower, unfortunately that is the only flower that is in full bloom in Fiji right now. Yes, we can definitely make changes, but at the next coming general elections. As Israel’s Prime Minister congratulated Boris Johnson on his win, he said “The people decide, not the media”. KORINA WAIBUTA Knollys St, Suva

WE read in the article “Australian government is acting illegally by not addressing climate change” (Yahoo 9/12) that former Banking Royal Commissioner and former Justice of the High Court of Australia, Kenneth Hayne, said climate change is the government’s responsibility, but Australia’s Prime Minister Scott Morrison and business leaders and government officials are failing to meet their legal obligations. It’s no wonder then that “Australia is copping it at COP25 –– and rightly so” (Opinion piece by Dermot O’Gorman, chief executive WWF-Australia, in the Canberra Times 10/12). I agree 100 per cent. Shame on those responsible for Australia’s failure to act as good global citizens. RAJEND NAIDU Atlantic Blvd, Glenfield, Sydney, Australia

A RENOWNED courier company smartly and proudly advertises their full range of courier services yet the company can hardly keep up with the service standards they portray. On some occasions we have used their fast air freight service because of the urgency of the item being sent, and on a few of these occasions we’ve had to wait for between 3-4 days for the items to arrive. The excuse has always been that the cargo had to be offloaded. We pay extra for this one day air freight service, but instead we are getting a sea freight service of 3-4 days. This courier company needs to understand that the main reason people use the fast air freight is because we need the items urgently the same day or the next at the latest. If you cannot provide that service, then do not promote that you can. And if you’ve failed to get the item across within the required time frame, then at least compensate for the delay. Its nothing but a hoax freight service otherwise! SIMON HAZELMAN Rava Estate, Savusavu

The voice of the people

I READ about the meeting the Lautoka Residents and Ratepayers Association had with the special administrators and the Lautoka City Council. Its a good start. With no mayoral elections, at least the people’s voice can be heard via this forum. And when I read that the aquatic pool was one of the issues taken up by the people, I was glad. Yes, the people need to know what happened. If some money was donated it shouldn’t be abused or mismanaged. Accountability is a must. I am also happy that an investigation will be taking place to determine what and why the cost rose almost two fold. No wonder the minister wants to raise city and town rates, I believe money could have been wasted via such projects. And I hope the investigation goes all the way and not peters out because some big names may come up. By the way, what has happened about Shirley Park, is it a deal gone bad? SUNIL KUMAR Lautoka

LETS take the time to reflect on the very real reason, for all the merry-making and feasting this festive season, Jesus Christ was born so long ago in a lowly manger, and later walked among us as our Redeemer, our Lord and our Saviour, lets always remember the true and real meaning of this joyous occasion, and not get too caught up in the material world and the commercialisation, as we once again approach the end of another year, lets continue to love, cherish and look after those that are dear, to one and all, a joyous Christmas and a spiritually happy and safe 2020, and that there is always glad tidings for you and blessings aplenty. EDWARD BLAKELOCK Admiral Circle, Pacific Harbour

A REGULAR and learned writer has mentioned more than once that individuals in Fiji can produce volumes on sevens rugby but shy away when it comes to other matters. I think he has come to this conclusion because the Fijian public are mostly unaware about many intricate events or simply don’t care. As long as Fiji wins in sevens, all is well for them. The rest is irrelevant. MOHAMMED IMRAZ JANIF Natabua, Lautoka

No data on mangrove

IT’S not surprising to learn that there is no data on mangrove health and coverage in Fiji (FT 15/12). Mangrove has mostly been regarded as optional extra resource material for human exploitation and to be dispensed with to make way for “development”. It’s sad that the significance of our mangrove and the critical part it plays in sustaining a healthy marine ecosystem and fisheries has not been truly acknowledged and appreciated. It’s time we did. RAJEND NAIDU Sydney, Australia

Westernisation is alive in Fiji

GLOBALISATION or Westernisation is alive in Fiji. My observation — A second-hand store selling Australian used clothes in a shop full of iTaukei men and women rubbing shoulders with Australians and New Zealanders all swaying to an upbeat iTaukei song. And I hear the visitors say: “That’s really reasonably priced clothes.” ALLEN LOCKINGTON Kava Place, Lautoka