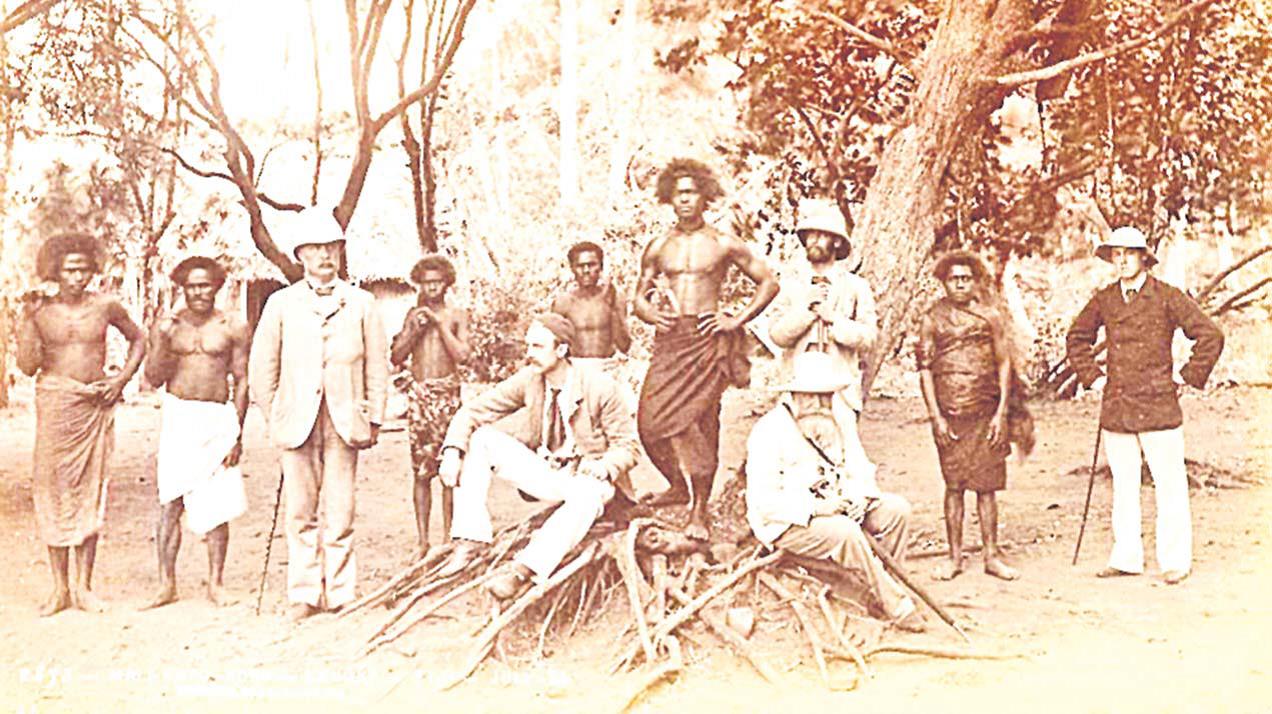 Colonists and indigenous landowners pose for a photo at Naikorokoro, Levuka, Ovalau in 1886. Picture: collections.tepapa.gov.nz

THE “Back In Time” article about the Germans of Levuka (FT 10/12) has an interesting photo with supposed Germans of Levuka and a number of iTaukei men. The photo was taken at Naikorokoro, Levuka, Ovalau in 1886. Here is a picture that is worth a thousand words, an image that just confirms how much we’ve lost it as far as health and wellbeing is concerned. The iTaukei men in the picture are as fit and trim as can be. Each and everyone of them look healthy with solid body structures and perfect postures. One-hundred-and-thirty-three years since and I believe the same cannot be said of not only iTaukei men but all other ethnicities as well. We are supposed to improve due to advanced research and technology and not worsen. Men and women of that period lived very long lives with many reaching their 80s through to over 100 years. Today I believe we are an out of shape, unhealthy people with the majority (80 per cent) dying well before time and from diseases rather than old age. I believe we have become a lazy people, distracted, indecisive, having poor nutrition, lack of self worth, and we’ve become so irresponsible. An overload of choices and our inability to make the right decisions for the betterment of our health and wellbeing. So sad! Simon Hazelman Rava Estate, Savusavu

THE revelation that 50 per cent of patients in hospitals in the country are diabetic (FT 08/07) says a lot about us as a people. It would therefore be fair to say that 50 per cent or more of our total population are diabetic. We have become a sick people mainly because of our lethargic unhealthy life. Life is becoming too easy for many in that we prefer convenience over labour and reliability! Instead of choosing to plant or to buy fresh food from our markets it is far easier to get noodles, biscuits or processed canned foods such as canned meat and fish from the village store or from the supermarket. Instead of cooking fresh boiled chicken or fish with fresh vegetables it is easier to buy processed fried fast foods in town. Instead of eating fresh fruits and vegetables we rather ingest processed snacks. Instead of the daily intake of 1-2 litres of water it is sweeter to consume carbonated or alcoholic beverages. Instead of doing some gardening or playing with family members outdoors it’s more comfortable sitting on the couch playing video games, watching TV, surfing the net, and drinking grog. It begs to question how Government and the nation are developing as a people? I believe the fact of the matter is that we are headed toward a great catastrophe! About 80 per cent of our annual deaths is from sickness of some sort that is directly related to what we put into our mouths. We are supposed to be growing in stature, values and morals. We are supposed to be growing in maturity, emotionally, physically, spiritually, and knowledgeably yet we choose to drown in temptation. In this time and age we are supposed to be getting better not worse! Government seriously needs to address this pandemic of NCDs as it is rooted in the political, social and economic fabric of our Fijian society. We are definitely doomed, health wise! SIMON HAZELMAN Rava Estate, Savusavu

A day for democracy

THE Sunday Times (15/09) has devoted two full pages to Democracy Day messages. As I look down from my 90-year-old perch, I must lament that “democracy” no longer exists in Fiji towns and cities. It can only be restored when we are able to elect our representatives. I have always been taught that democracy consists in “government of the people, by the people”. For many years I have admired the words of our present Speaker of Parliament. Today he says “Democracy is only as important as the public participation of citizens, and this must be increased for social cooperation and development” We cannot participate until we have a voice. When town and city elections are restored we can enjoy democracy. PAUL B SLOAN Samabula, Suva

CHILDREN’S right is important and so does respect towards our parents and elders. I grew up in a strict Christian family and was never really allowed to “have fun” like most kids. While my classmates would skip class or meet their boyfriends at a game centre after school, my mother would wait for me after school every day to pick me up and take me home. But when I became a teenager, I started to “kind of” rebel and I did bad things such as skip religion classes to hang out with my best friends at the back of the school hall or ditch school (once) to go to my best friend’s homestay and cook kimchi and spicy noodles. During my sophomore year at university, my friends and I compared and joked about how we used to get the hiding for breaking the rules. Compared with the kids nowadays, they have the privilege of being made aware of their rights and to be vocal about it. However, some have taken these rights out of context. I was very surprised when my younger sister jokingly told my mother that she can’t hit her or spank her because that’s child abuse and my mother will be violating her rights. Then I thought to myself if my sister, who was 10 years old at that time, could use that as her defence, then I am pretty sure others have done the same. Rights weren’t formed to be used as an escape plan or shield to defend a person’s wrongdoing. Rights come with responsibilities. Now that I am an adult. I finally understand why my parents were strict. It wasn’t because they hate me. In fact, they did whatever they can to protect me and help me stay on track to reach my goals. If it wasn’t for them I wouldn’t have been able to finish high school or even step a foot in university. MONICA AGUILAR Suva

I write in response to a FT letter (9/12) by Mohammed Imraz Janif of Lautoka questioning the participation of a serving female inmate in the 2020 Fiji Fashion Week. Mr Janif asked what is the difference here compared with the recent incident where a convicted rapist and former rugby player was spotted taking part in a rugby scrimmage. The difference here is that Jessica Hill has served four years of her seven-year sentence for manslaughter and dangerous driving. She will be eligible for parole after serving five years. Her art and design is part of an upskilling program as per Fiji Corrections Service’s rehabilitation policy. It is expected her talent in fashion design will help her reintegration once she finishes her prison term. In the case of the convicted rapist, he was spotted playing rugby outside prison just five days after being sentenced to eight years in prison. Fiji has horrifically high rates of sexual and gender-based violence and after the public outcry, the director of rehabilitation, Salote Panapasa, clarified that appropriate measures had been addressed internally at Fiji Corrections Service to ensure proper processes are followed for rehabilitation programs. Let’s continue to hold each other and our institutions accountable if we see any double standards. Kris Prasad Nausori

The other day my daughter took her car to LTA for fitness and registration. Imagine the amazement when an additional $73 was demanded because the vehicle had tinted factory-fitted rear (not front) windows, despite having been on the road for a year in that condition. What possible effect on vehicle safety can we have with rear tints, oh I get it, rear tinted windows drink alcohol and cause speeding, the primary cause of road fatalities. I have always been a vocal supporter of the efforts of the LTA and police to improve road safety. Given the rapid increase in vehicle numbers and the reducing fatalities, efforts are paying off, credit where it is due. However, the tint levy is farcical to say the least. I would much prefer the LTA and police to get on to the roads at night more frequently, particularly checking headlamp alignments on vehicles with one lamp pointing to heaven, the other into the cane fields. Many newly imported vehicles have lights of strange colours which are far too bright. Finally, LTA should read their own manuals and take off the roads vehicles which have been modified from the manufacturer’s specifications without LTA approval. This includes spoilers, excessive lighting, lighting on roofs, straight through exhausts etc. Levy some hefty fines on this, rather than silly tint levies. Allan Loosley Tavua

This is the best news I have read so far — no more amnesty for city and town rates defaulters. Why should the defaulters get a discount when many people who pay on time pay the full rate. Thank you madam minister Premila Kumar, that’s good news. And while I am still on city and towns, could you tell us what is happening about the Lautoka Aquatic Centre. Are you conducting an investigation. I hope The Fiji Times could go and check and tell us. Like Allen said, it could be the deepest swimming pool. Sunil Kumar Lautoka

It’s saddening to read that Paula Dranisinukula’s injury could prompt the Ra native out of Cape Town. On the other hand, good news for fans is that the captain’s armband is likely to be given to the WRSS Player of the Year Jerry Tuwai. We need a leader who can take us through the most treacherous journey on the 7s circuit and Jerry is the best in the pack. All the best our “Little Master”! The nation counts on you to take Fiji past the pool stages in Cape Town where we face two of the best 7s sides- USA and SA! Ouch! Rajnesh Ishwar Lingam Nadawa, Nasinu

I gather that Qorvis is a communications organisation. With no particular relation, I believe communications is one of the four areas which received an increase in the 2019/2020 budget. What does Qorvis really do in Fiji? Mohammed Imraz Janif Natabua, Lautoka

A friend asked who is in charge of the sevens team? The coach or some FRU officials? I replied it’s only the first tournament, give them a break. Dan Urai Lautoka