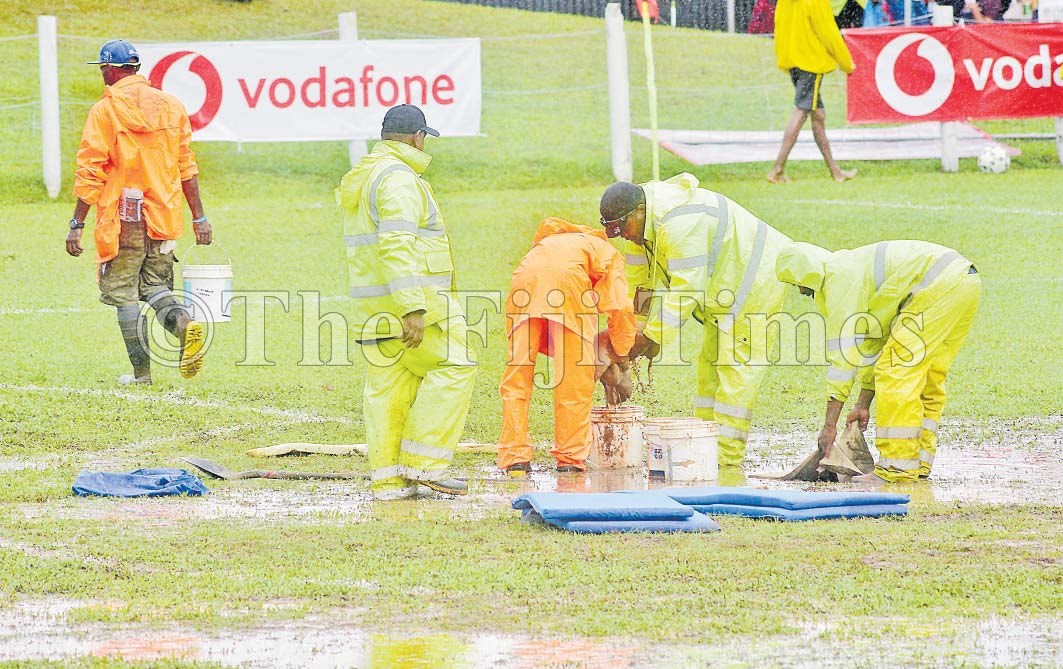 To me the Fiji FACT highlight was when the council workers brought sponges to make Subrail Park dry. They were soaking the sponge in the water and when they lifted the sponge almost all the water dropped back on to the ground. The ground has to be flat but you can make the town end of the ground 15 degrees higher than the river end. One question to CEO Fiji Football Association — can a team play half game today and the next half on another day? Sukha Singh Labasa

Referring to what was published yesterday (FT November 30th, pg 12, titled — call for a more just society) I would say that a just society should be a vision that must firmly be established in the minds of our people. The vision can only be achieved if we understand the value of human lives especially women and the significant role they play. Therefore, it requires workshops or seminars to be conducted by relevant authorities for community awareness. If not members of the public will live in the dark. Additionally, elimination of violence against women will fall on deaf ears. Isoa Tulega Qioniwasa Wainadoi, Navua

I am most certainly not looking forward to the Great Reset, it will probably be much more than a change in mindset, it might even be the beginning of a great recession, if not – heaven forbid – the beginning of another great depression, it really does not appear to me, what they say it is going to be, I guess we will all find out next year, after the resolutions in January, the much touted Great Reset, may eventually turn out to be the “not so” Great Reset. Edward Blakelock Admiral Circle, Pacific Harbour

Another milestone was achieved on Wednesday at the launch of our Fiji National Action Plan to prevent Violence Against Women and Girls (2021-2026) by our Hon PM. Credit should be given to those women who worked hard and tirelessly in compiling this document from the beginning such as Shamima Ali and her FWCC team, and other women-led women rights NGOs and UN Women and team. The Ministry of Women only nationalised this document as a ministry responsible for women and girls in Fiji. Fiji is the first nation in the Pacific to have its national action plan apart from Australia, and I hope that other Pacific Island countries will take heed. Congratulations to all of you (you know who you are) in putting together this document. Let’s hope that the document will be put into action rather than be kept at an office shelf as some memorabilia. Jioji Masivesi Cakacaka Tadra-Votualevu, Nadi

The bruised and bloodied face of AB skipper Sam Cane summed up how tough a road it was out there not reflecting on the 38-0 score. The Puma coach did say and correctly the score did not reflect the passionate game they played. The game was hanging in the balance until the 60th minute and the Pumas were still in the mix. The tackling stats was a wavering disparity with Argentina defending. What was amazing to hear in the post match comment by Puma captain Pablo Matera when he spoke and said they were not clinical and lost a lot of ball but never used the excuse of 10 wholesale changes that was made since their historic win. That’s a genuine comment from a leader taking no excuse and defence of a big defeat. Great Puma team and change in dynamics of their game in the Tri Nations this year is exotic and up a level. Finally well done to rookie Will Jordan and his raw speed joka dina and I will continue to patiently look forward to scavenger and our own Hoskins Sotutu’s first try in AB, another gem of a player. Good, better and best and let’s see the end result by next week. Joka kece. Shalwyn Prasad Mukta Ben Place, Nabua, Suva

Harbouring rubbish I would love to see underwater photos of our Suva Harbour seabed which was highlighted by The Fiji Times on Thursday, October 29, 2020. I believe it has become a dumping ground for many ships that come for berthing at our two wharves including some nearby businesses and industrial factories. While we concentrate on the land pollution, I believe little action or no action at all was taken on our harbour or seas. The ministry responsible for our environment should strengthen its laws in policing roles not only at the Suva Harbour but including the EEZ of Fiji. JIOJI MASIVESI CAKACAKA Tadra- Votualevu, Nadi

Former senior division soccer champion Savusavu had to come from behind to win the President’s Cup at Bocalevu Muslim Primary School after trailing Nadogo 1-0 thanks to Sailasa Vosairake’s goal. Former Labasa Sangam College student and former Labasa and Lami rep Apisai Sesewa gifted the boys from the Hidden Paradise the equaliser minutes from full-time as Savusavu defeated Nadogo in penalty kicks. The win delighted Savusavu fans and president Tony Kabakoro. It brought memories of the glorious days of Savusavu soccer under the able leadership of the late Surendra Rama. It was a delight to read that former Suva, Labasa and Ba finisher Maciu Dunadamu captained the Savusavu team, and he finished the tournament as the highest goal scorer. Savusavu’s win has brought a ray of hope and as a proud writer from the Hidden Paradise, I congratulate the Savusavu team, and I request the team officials to keep up with the momentum and take Savusavu back to where it is supposed to be and not where it is now. The Savusavu team’s fighting spirit and character is commendable just as the efforts of Manchester United which came from two-nil down to defeat Southampton 3-2 and end the Saints’ unbeaten run. Go United! Rajnesh Ishwar Lingam Nadawa, Nasinu

First recognised in 1988, World AIDS Day falls on December 1 each year marks the 30th anniversary of World AIDS Day. The annual observance highlights worldwide efforts to combat HIV/AIDS. World AIDS Day is also an occasion to show support for those living with HIV and to remember those who have died from the infection. While COVID-19 has devastated communities worldwide and remained in the spotlight since late last year, we must not forget about HIV/AIDS, a pandemic that has been raging for more than 30 years and remains one of the deadliest infectious diseases in history. AIDS (Acquired immunodeficiency syndrome) is a disease caused because of the infection of Human Immunodeficiency Virus (HIV). The day is celebrated by the government organisations, NGOs, civil society and other health officials by organising speeches or forum discussions related to AIDS. Here’s how you can become an Action Hero: Step 1: Put on your favourite red clothing item or wear a red ribbon to showcase your support! Step 2: Make a sign or write a caption about why you’re wearing red for AIDS awareness! Step 3: Use of protection is vital for your health. World AIDS Day is dedicated to spreading awareness of AIDS, and to mourn those who have died from the disease. Neelz Singh Lami

The FRU has been awfully quiet lately. Is it business as usual after the debacle of the Autumn Nations Cup tournament? I guess the fans and Fijians do not require any explanations for what happened because it is all in the past now. Would I be too far off the mark if I suggest that they are too busy planning for the next Mickey Mouse 7s tournament? Jan Nissar Carlton, NSW, Australia

With all the kach kach and bickering that’s brewing within the SODELPA camp, it would be interesting to gather if Bill Gavoka’s brigade will still be relevant to contest the upcoming election (FT 30/11). Hopefully, the party does not have to rebrand to “NO-DELPA” come the 2021 polls. Nishant Singh Lautoka

Into the last month of the year, have all districts completed their local league (club soccer) competition? Club soccer competition rarely receives the limelight. Instead of the repetitive sentences in the weekly soccer updates, we shall have news from local league competitions. Mohammed Imraz Janif Natabua, Lautoka

Today’s Thought: “The most practical kind of politics is the politics of decency” Theodore Roosevelt ( FT 29/11 ). The practice of that kind of politics has become all too rare these days. It is often conspicuous by its absence! Rajend Naidu Sydney, Australia

I can imagine the misuse and mistrust if that party was in government. Better remain on the other side. AREKI DAWAI Suva

With a change in leadership, does SODELPA intend to include among it’s ranks more individuals from other ethnic backgrounds? Mohammed Imraz Janif Natabua, Lautoka