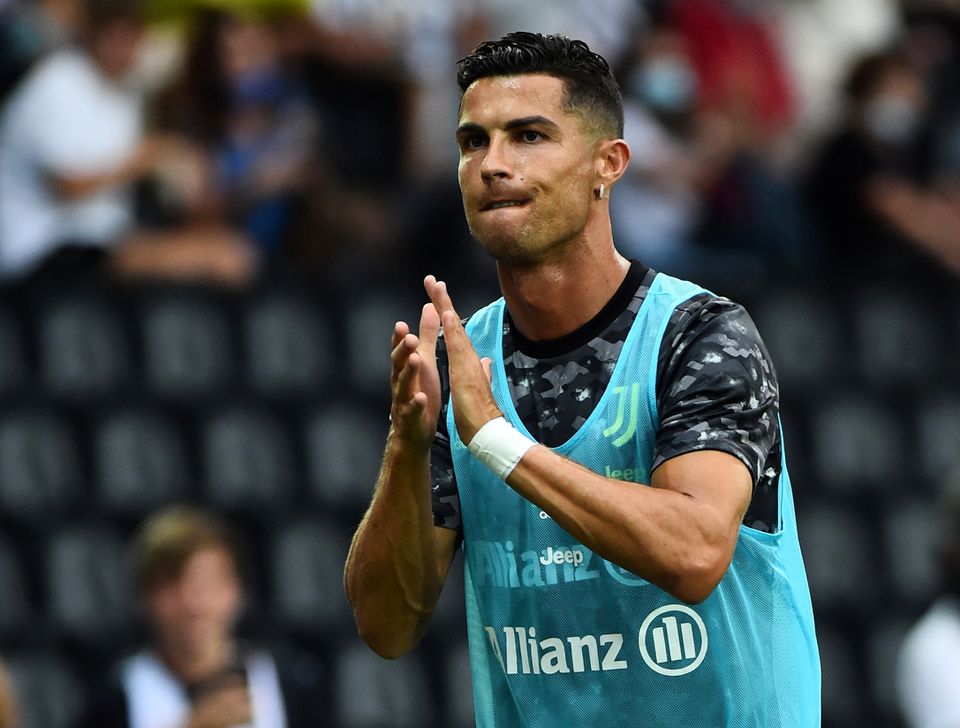 Our aspiring letter to the editor writer Raynav Chand, who like me is an ardent Manchester United fan, disturbed my peace yesterday morning with a shocker that I found time to digest. Excitement was high on our messenger group, as information about Cristiano Ronaldo re-joining the ‘Theatre of Dreams’ reached Manchester United fans. We tried to digest the exciting news, and discussions continued as to why Ronaldo joined United and not Manchester City, as was speculated. Through google and Youtube, we found out that United had agreed a deal for Ronaldo to return to Old Trafford from Juventus. The 36-year-old is set to return to Old Trafford 12 years after leaving for Real Madrid. His return has sparked a lot of interest, and United fans here and overseas are beaming with smiles. Ronaldo’s return brings back memories of our glories under the evergreen Sir Alex Ferguson. All the best Ronaldo! Welcome home! Rajnesh Ishwar Lingam Nadawa, Nasinu

According to the Minister for Economy 3900 applicants who applied for $360 unemployment assistance would receive reduced amounts because they tried to fraud the system by over claiming the $50 and $90 assistance given out earlier (FT 28/8). I believe it is not right to condone such fraud as it will set a wrong precedent. If it was human error then it’s OK to deduct the over claimed amounts. But if it was a deliberate attempt to cheat then they should be taken to task to send out a strong message to others. Let’s not forget we are dealing with taxpayers funds here. SELWA NANDAN Lautoka

On Thursday (August 26), USPSA held their last conference for their Young People and Democracy series. I was blessed to have been a listener to this conference after exiting from a similar one earlier in the day. I must say that it was encouraging and inspiring to see young people take centre stage in addressing democracy and the importance of youth’s role in safeguarding this sacred principle. As a young person who, until recently, did not take an avid interest in youth activism. I thank all the speakers, the moderator and the USPSA for this timely conference. I picked up an interesting point from (and I hope I’m right) Broderick Mervyn. He was responding to a question, can’t remember the exact question but it revolved around youth parliamentarians. Mr. Mervyn said that while that vision was something we should strive for, we needed to be realistic and ask ourselves how many of us (young people) would vote for any young person who is running for Parliament? As voters, if it came down to picking between an old, seasoned candidate and a fresh, youth candidate, the choice for many of us will be skewed more to the former. As a young person, this made me sad. I fear that our Parliament is so gerontocratic that barriers to youth entering Parliament may have solidified over the years. How sad. Yet, despite all of this, we are told to be hopeful. It really does seem that hope is the only rope that we cling onto today. Ratu Manoa Rokotavaga Suva

I think the R word is popping up too frequently now in Fiji. The latest mention is by prominent lawyer Graham Leung. What is respect and who is to be respected? Didn’t we start to learn about it’s facets while we were learning to walk? The sad part is that adults need reminders about respect. I think respect is earned and it does not just depend on the present status or title a person holds such as being a minister, CEO of a company, teacher, carpenter or for this matter, a street dweller. In my view, our understanding of respect is influenced by things like occupation and pocket size. We use “honourable”, “sir”, “madam” etc as vehicles of respect. But will our stance change when people retire or move on? I think the differentiation is between whether respect is for the title only or it has been earned by the respective person regardless of status. Edward Mbiaka had once said: “Respect comes in two unchangeable steps – giving it and receiving it.” If the focus remains on receiving without giving, it won’t take too long for receiving to end up in the endangered list. Mohammed Imraz Janif Natabua, Lautoka

As a child, do I need to be consulted prior with final consent from parents/guardians, should Government decide to vaccinate children below 18 years in the not too distant future? Fiji Government needs to hear our voices too. Jadon E Masivesi Tadra, Votualevu, Nadi

“Trial and error is a fundamental method of problem-solving. It is characterised by repeated, varied attempts which are continued until success, or until the practicer stops trying.” – Wikipedia…. uuummm NIGEL FIU Owls Perch, Lautoka

SO very good to get the story of COVID-19 survivors. Thank you very much Simon Hazelman. Please mend well and look after yourself. And yes, it’s very true that we have lived in a world gone mad with stress, and being wired up. So good to disconnect and stay close to nature and loved ones. The great blessing of COVID 19, is that it is reopening our eyes to what really matters: People, ourselves and giving each other the time and space to be. Especially through sickness and loss. Self care is vital when you have a near death experience. And when you lose a dear loved one. I lost my younger sister in NZ on August 4, and not being allowed back into NZ at the time before their Delta outbreak was devastating. Thank you so much for sharing your personal COVID- 19 story Simon. So glad you are on the mend. Take it easy. We need your feisty you, back in the Fiji Times. More COVID survivor stories from Fiji patients, please Mr Wesley. Thank you. JEAN HELAN Nabua, Suva

WHAT do you call a person who is suspicious of everybody? ALLEN LOCKINGTON Kava Place, Lautoka

AFTER getting the $360 assistance from government, I believe many Fijians have noted a massive price increase of products such as powdered milk etc. I wonder where are the Consumer Council or FCCC at this time? JAHEED BUKSH Korolevu, Sigatoka

I note that the Electoral Commission has respected the decision of the Court of Disputed Returns in overturning the decision of the Supervisor of Elections to withdraw Mr Niko Nawaikula’s name from the Registrar of Voters (FT 28/8). And so should everybody else. Of course whether one accepts the ruling or not is really a personal matter. But there is no point blaming anyone now. If the law needs to be amended to amplify its intent and purpose or to correct an anomaly then the due process as provided under the law should be followed. SELWA NANDAN Lautoka

Targeting SODELPA, Tukai Lagonilakeba makes a ridiculous assertion in the other newspaper, Thursday, August 26 that I have lost control of the party. He does not know or refuses to know that SODELPA has a well-defined structure that allows it to function as a leading political institution. At its head is the president who is chairman of the supreme authority of the party which is the Annual General Assembly, and chairs the governing body of the party, the management board. The president has the oversight of all party matters. Under the president are two secretariats; one in parliament under the parliamentary leader and one at party headquarters under the general secretary. Parliament sits some eight or nine times each year and there are committees, six in all, meeting virtually every week. All these come under the domain of the parliamentary leader overseeing the work of the 21 SODELPA parliamentarians. The party is based at its headquarters at 66 MacGregor Road, Suva, where the general secretary presides, who is also the authorised and registered officer of the party. In essence this is the CEO of the party. The party leader takes the party to the General Elections and is based at HQ with the elections team led by the campaign director. This is my role and as we speak, the party is in election mode and steps ahead of everyone else. SODELPA is a constituency based party with 28 constituencies each with its own council. Under the councils are chapters and branches with their own committees. The general secretary manages the affairs of the party and maintains linkages with all the constituencies/chapters and branches ensuring we all march together under the SODELPA umbrella. Ours is an institution that is solid and resilient, providing custody and promoter of what we hold dear, for us today and for our future generations. For the SODELPA people, we were members of the Alliance Party from independence, but came the coup in 1987, it disintegrated. We went to the SVT, then came the coup in 2000, it fell into disarray. The SDL came in 2001, and with the changes in the laws, is now known as SODELPA. It has won two elections, was overthrown, went into opposition twice, suspended but still going strong. With 20 years behind it and having been through it all, it is the party for our people into perpetuity. Mr. Lagonilakeba should try another target, not a party as solid as SODELPA. Viliame Gavoka Party Leader – SODELPA

I recently spent five days and nights staying at this home in Vatuwaqa. It was wonderful to see, engage and spend time with Sujit Kumar, and meet the wonderful local women staff who all lovingly attend and care for him day and night. Thank you for being so caring. The founder of this Home named after the Chickenman, “the Sujit Kumar Happy Home Trust” employs locals on a minimum wage to do this tremendous day and night job caring professionally for Sujit Kumar. They live and work here too, with their children, along with several rent paying boarders too, usually 3 – 4 other people who pay market rates to maintain the pool and trust property, and pay these workers. These local women workers are paid $4 an hour for this kind of special needs care and work, along with all house maintenance, yard work, pool and house cleaning for boarders, and doing all house work for everyone at a price if wanted. For example, one load of washing is $10, or having a unit cleaned is $25. This seems a completely mammoth job, on relatively unreasonable pay rates by wonderfully faithful local women staff. The value of their work in this trust home is first class and way underestimated by this pay level. While it is the legal minimum wage, it is appalling for the value of the work they do, both to maintain this trust property, and to care for boarders accommodation, and a highly specialised care needs person, the 40 year old man, Sujit Kumar. They do all the work. I was surprised to discover how
low their pay is, when they essentially run this place, with the founder living here as well. It’s a Christian mission home. The work that Emma, Millie, Akanesa, and at least one other, do to maintain this founders trust Home, where she lives to supervise all, along with 3 – 4 various rent paying boarders, is worth far more than $4 an hour. My candid, interested observations over a short week. JEAN HELAN HATCH Sawau St, Nabua, Suva