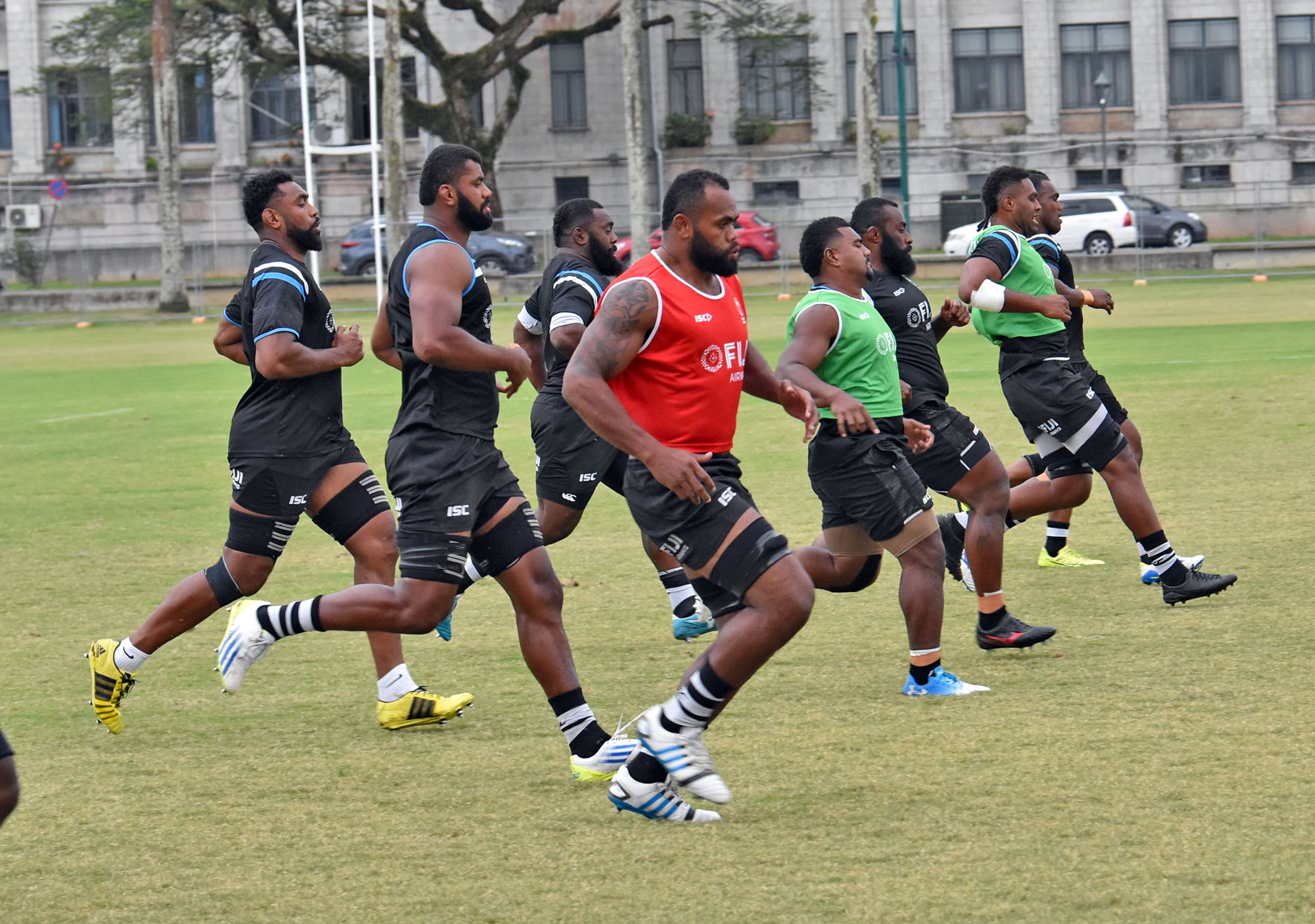 Fiji Airways Flying Fijians players sweats it out during their team training at Albert Park in Suva on Monday, August 19, 2019. Picture: JONACANI LALAKOBAU

Before the RWC Fiji’s pool opponents and Six Nations Rugby champions Wales received a major boost as the Dragons have risen to the top of the world rugby ranking displacing the All Blacks after almost a decade. Wales won this year’s Six Nations Rugby Championship for the first time since 2013 to claim their 27th title and first Grand Slam since 2012. Wales beat France (24-19), Italy (26-15), England (21-13), Scotland (18-11) and Ireland (25-7) during the Six Nations Championship. In the weekend Wales achieved one of their biggest feats to climb to the top of the world rugby rankings after outclassing England (13-6) in Cardiff, avenging the (33-19) defeat at Twickenham the previous week. Wales’ rise to the top should motivate our boys to prepare even harder as it will be a battle between the world’s number one and the 10th ranked team. It’s time to rise and make a statement if we have to progress beyond the pool. All the best to the Flying Fijians in their preparations! Rajnesh Ishwar Lingam Nadawa, Nasinu

I’m bemused with the recent outcry in the media of many talking about children engaged in selling food or bu either on streets or the roadside. It takes me a little back when I put myself in a debate where I was trying to point out that the recent minimum wage is not enough to sustain a decent life. I was belittled by many in authority that Fijians are much better as those selling food, vegetables or bu earn far more than $200 per week in profit. Today the reality has struck that rather than going to formal education and finally end with a job in the formal sector which will give you minimum wage, many young ones are engaged in informal economy and saying that it’s better to sell food and bu. So keep debating unless we find a genuine solution! After all, money matters for livelihood. R K Singh Lautoka

I totally agree with Qoliqoli Cokovata Macuata Committee (QCMC) representative, Seru Moce, that night diving should be banned. Night diving is rampant throughout the Northern Division and outer rural maritime islands. Not only are night divers spearing anything and everything big and small, they are also wrecking coral heads within our inner reefs by stepping on them and crushing them and breaking them with the spears they use. The use of derris (duva) by night divers is another issue of great concern as the poison kills everything including the coral reefs. Night diving the inner reefs is by far the easiest way to make a catch and is by far the most destructive way of harvesting marine resources. Spear fishing by night divers should have been banned years ago! Simon Hazelman Rava Estate, Savusavu

Electrical and diesel water pumps are expensive to maintain. Third world countries use solar water pumps to assist their rural population. Why can’t government pursue the same for our people in light of the difficulties faced at Tabataba settlement in Ba. (FT/19/8/19) Dan Urai Lautoka

Simon Hazelman had requested in his letter to this column that I should come and see for myself why the Nukubalavu Rd in Savusavu needs to be sealed. Well, I want to let him know that I have already seen and travelled the road he is talking about and I must say that it is one of most standard gravel road around the country. He was mentioning about the roads like the Labasa/Naboulwalu, Buca Bay Hibiscus Highway and Leciaceva Rd that are being tar-sealed while the Nukubalavu one is not. Mr Hazelman should know that the sealed roads he was mentioning are roads that connect directly to the main towns of Savusavu and Labasa, while the Nukubalavu Rd is just a feeder road to the Buca Bay Hibiscus Highway that leads to Savusavu. In addition, he used an analogy of Suva City as an example where on one side you have that sealed Lami Rd and on the other side you have the sealed Nausori road. Again here the context is totally different for the Lami Rd and Nausori road are town roads that connects to the Capital City and of course they should be sealed because they are situated along the main developments area of Fiji. To use these examples to justify his argument that the Nukubalavu Rd should have been the first road to be sealed, I believe is illogical because the context is totally different and to say that without the Tui Nasavusavu, and his father and grandfather there would be no Savusavu Town, I again believe is an understatement. My humble advice to Mr Hazelman is that our chiefs should see that their people are well served first than themselves. Kositatino Tikomaibolatagane Vuninokonoko Rd, Navua

I was behind a concrete mixer truck doing 60kph just past Saweni on the way to Lautoka. As we passed the 80km zone the truck could not speed up as it was limited to 60kph. It was like this all the way into the city, `being unable to use the 80kph limit. There was a long line of cars being held up. Fortunately for us at times buses and trucks do go beyond that limit so we don’t get held up needlessly. I have often wondered why is there a difference for commercial and private vehicles. Surely these drivers are just as good as private vehicle drivers? This anomaly only causes frustration and stress for those that are allowed to use the 80kph. From Wikipedia I found that our near neighbours Australia and New Zealand do not have this stipulation, except in Australia there are limits for buses and trucks on sharp bends and steep winding roads. It seems our laws are based on UK where there are slightly different limits for trucks and caravans and towed vehicles. In some places they have a limit as high as 100 and 110kph. Why don’t we follow our near neighbours which seems more sensible than the more conservative UK model? Would the new LTA chief executive officer or FRA chief executive officer be able to comment on this? Norman Yee Mehrotra Place, Martintar, Nadi

Exactly! I cannot agree more that moral decay can be addressed by strengthening family values. Often, tiny ones in the house swear and people have a good laugh because it is “cute”. Unknowingly, this response gives those tiny ones confidence to repeat because they perceive it as the right conduct as it makes the others happy. But before that, where do they learn those swear words and other bad behaviour from? And old saying goes, “mango trees will produce mangoes”. This cycle continues. It is often left to the teachers to take care of this through moral value lessons in schools. But what difference can their efforts make when children go back to their home environment as part of the daily routine. For children, this becomes “normal”. They carry their “normal” behaviour wherever they go including schools. A lot of home problems get passed on to schools because of the lack of family values. Many parents rely on the teachers for this. The reason is that when they were young, the same happened to them. There is an old Chinese saying, “when you want to know what kind of people the parents are, just look at their children”. The foundation of family values are laid by the parents. Mohammed Imraz Janif Natabua, Lautoka

State of the economy

The Vodafone Premier League (VPL) is heating up as Ba recorded an impressive win over Labasa (3-0), Nadi thrashed Rewa (4-0) and Suva upset Lautoka (2-1). Ba leads the ladder with 26 points while Lautoka is second with 19 points. Suva and Labasa are third and fourth respectively with 15 points. As it is Ba looks to top the VPL title while a spot for second place is likely to be contested between Lautoka, Labasa and Suva. Labasa was unlucky to play straight after winning the Inkk BOG and the boys lost focus in the Western heat. Hence, the last few rounds will be full of excitement. On the other hand, Navua looks set to make it back into the premier grade. My best wishes to the participating teams! Rajnesh Ishwar Lingam Nadawa, Nasinu

I wish to thank FMF Foods Ltd for an excellent product in their wholemeal biscuit 320g. Now I don’t have to worry about my breakfast every morning. Ajay Singh Natabua, Lautoka

Meningococcal C is a killer. It’s not an outbreak (FT 19/08) but two people have died. I believe more awareness is needed and for life’s sake, reduce the cost of the vaccine. Dan Urai Lautoka

Because of the prevailing dry weather, we are informed that water sources in the West are drying and people are suffering. How are the bottled water companies in Fiji coping? Mohammed Imraz Janif Natabua, Lautoka