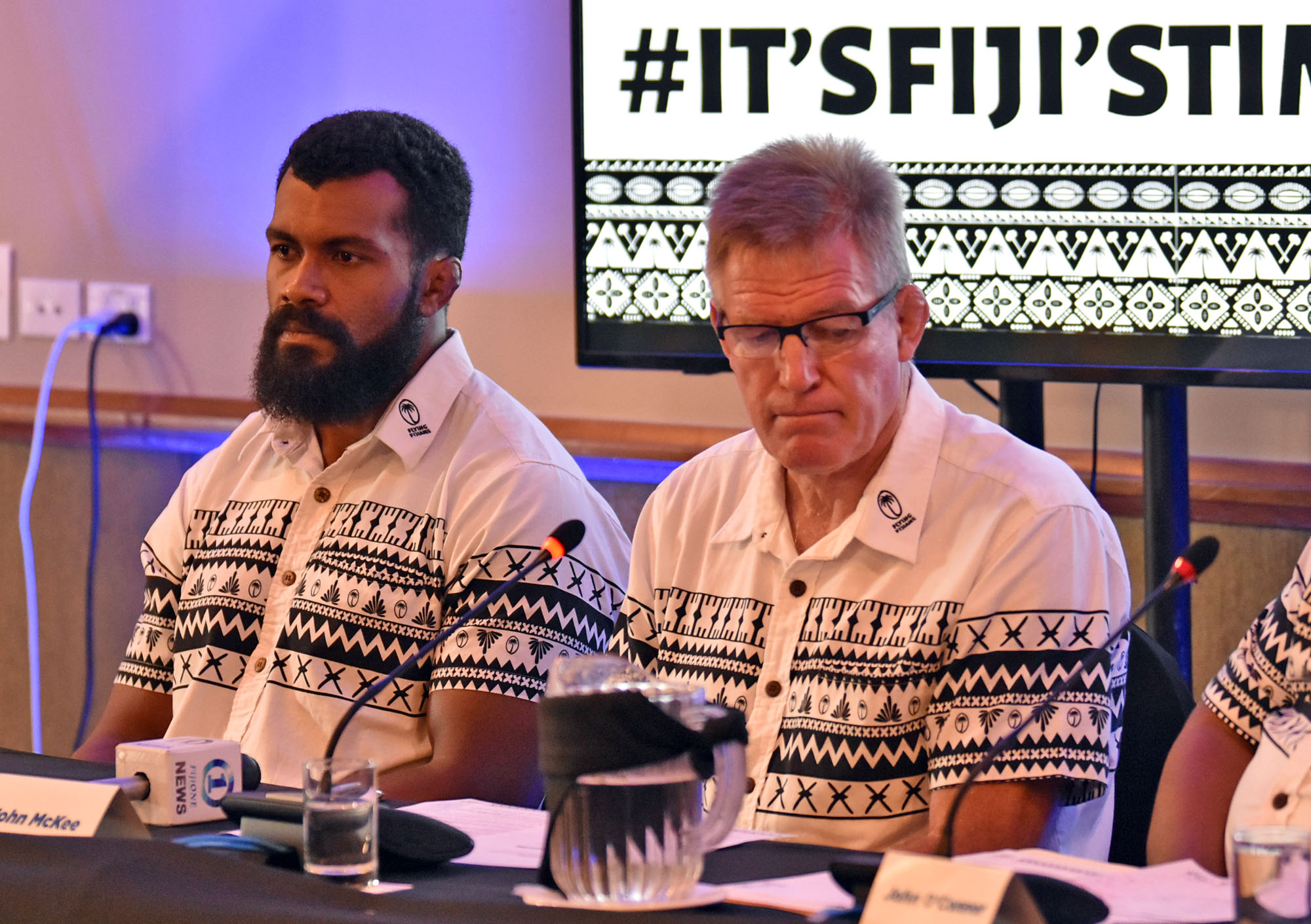 National 15s coach John McKee in his address after the RWC (Rugby World Cup) squad was named said he was pleased to name a strong group of players who were capable of challenging for a playoff spot in the land of the rising sun. He said the squad named was out to make Fiji proud. McKee reminded the unit that their selection came with responsibility and that the players must give every single day in preparation to represent Fiji as 35 days were left to the epic battle. I’m adamant that McKee and the Flying Fijians will step to a higher level. Captain Dominiko Waqaniburotu said it was an honour for him to be part of the special group as it was a special year for the side. From my dream team Albert Tuisue and Patrick Osborne missed out while Kalivati Tawake, Henry Seniloli and Mosese Voka made the cut. McKee has indeed got a strong squad and the onus is on the boys to make our country proud and restore lost glory. I wish McKee and the Flying Fijians all the best! Rajnesh Ishwar Lingam Nadawa, Nasinu

Will the presence of four Fijians in the Wallabies v All Blacks match lift the standards of the game to another level? One can be sure that the All Blacks are hungry for revenge after such a massive defeat to the Wallabies last week. Imagine the pain among New Zealand fans especially with the All Blacks so used to winning against the Wallabies and millions of dollars spent on their team. An exciting clash it will be, and one can expect some flair in the game. Meanwhile, Fiji fans will continue to dissect the naming of the Flying Fijians team to the Rugby World Cup. Floyd Robinson Toorak, Suva

My internet was down for a week and I only got to read Richard Naidu’s interesting write up on the advertisements for two presidential gardeners (FT 10/8 pg36-37) on August 15. Richard wonders “Is it really necessary for our taxpayers to pay more than $1000 — at least three different times — for full page colour advertisements for two presidential gardeners?”. I think the taxpayers are getting a real bargain given the vast colonial era landscape * of the presidential residence and what’s more the presidential gardeners will also be constitutionally knowledgeable. Where else can you get that? I believe at least half a dozen constitutionally knowledgeable presidential gardeners are needed to maintain it. Imagine how much that would’ve cost the taxpayers? I believe the government of the day is mindful of that. Hence I believe the advertisement for only two gardeners in the one government favoured newspaper, which is not The Fiji Times, the number one newspaper in Fiji! Rajend Naidu Sydney, Australia * We used to take a short cut through the GovernorGeneral’s compound from Nasova Police Barracks to Suva Methodist Boys School in Toorak during the colonial days.

Vacancy advertisements have a pattern. The first requirement surrounds academic qualifications. It is followed by work experience, knowledge required for the position and personal attributes. The latter constitutes most part of the advertisement. Once potential candidates are identified and short-listed, they are called for a formal interview. Just like the advertisement, the interview revolves around the latter requirements. Does that make academic qualifications just a formality? Mohammed Imraz Janif Natabua, Lautoka

Freedom of speech is a much cherished value and a gift of Western civilisation. This, like any other freedom, paradoxically, was won when some people dared to offend the orthodoxy of their age. For example a radical 18th century British journalist, John Wilkes, wrote stories which were deemed offensive in his newspaper. The journalist’s idea was to seek freedom of expression despite his offensive narratives. He did eventually contribute towards achieving a free press. Today, I believe some progressive leaders think that we humans have become more fragile personalities than ever. Thus all speeches need to be monitored and policed. Whenever a person says something insulting it is easy to demonise the person rather than his ideology. I believe nowadays, it appears, there is more freedom from speech and less freedom of speech in our relations. Sachida Nath Nadi

Being struck in traffic for over two hours in Lami while travelling to Suva on Thursday (15/08), I feel the re-sealing works being done in the Suvavou area has been extremely poorly planned by the Fiji Roads Authority. The Lami corridor is the single route providing access to and from Lami, Navua and the Western Division for people and businesses alike. It is callous and impractical to impose congestion on them that causes loss of valuable time, amounting to hours and not just a few minutes which perhaps would have been both acceptable and bearable. An ideal option was to bust both sides of the footpath and create temporary access lanes in order to allow traffic flow to continue on both sides, albeit at a slower speed though. Of course there is additional cost to bust and later restore, but definitely the economic cost of traffic congestion would be much higher. In the future, the FRA can perhaps employ some sort of sanity before such projects and minimise serious and consequential disruptions. Bimal Prasad

Kositatino Tikomaibolatagane needs to come see for himself why the Nukubalavu Rd here in Savusavu needs to be sealed. While I totally understand that there are places in Fiji that are longing to have access to proper roads, the Nukubalavu Rd is different in that it is bordering Savusavu Town boundary. Four roads intercept into Savusavu Town. The Labasa/Nabouwalu Rd (sealed), Buca Bay Hibiscus Rd (sealed), Leciaceva Rd (sealed), and Nukubalavu Rd (unsealed). Of these four roads Nukubalavu Rd is not only the closest to town, but it is the shortest (3.25km) and the most populated area in and around Savusavu. Take away all those living along this road and you take away over half of Savusavu’s population, with the majority working in the Savusavu Town area. Here’s a simple analogy using Suva City as an example. On one side you have the sealed Lami Rd and on the other side you have the sealed Nausori Road. Remove the sealed road between Walu Bay and Lami and have it as a dusty gravelled road up to Lami Town before connecting to the sealed Queens Rd. That dirt road stretch is the situation here with Nukubalavu Rd in Savusavu. It’s the missing piece of the sealed road puzzle here in Savusavu. I’m not talking rural roads here but urban setting! As for my chief the Tui Nasavusavu, he, his father and his grandfather have had a lot to do with the development of the areas in and around Savusavu Town. If it wasn’t for them many projects up here in Paradise would never have eventuated. If it wasn’t for them there would be no Savusavu Town. While all the villages within the Savusavu region can now be accessed by sealed roads, the Chiefly village of Nukubalavu remains unsealed to this day. Again, I say, of all the roads in and around Savusavu Town, Nukubalavu Rd should have been the first road to be sealed, not the last! Simon Hazelman Rava Estate, Savusavu

The month of August is an auspicious one for Hindu brothers and sisters as they celebrate Raksha Bandhan. Rakhi, which is the physical symbol of the emotions of love, affection and care involved with Raksha Bandhan, is basically a sacred thread of protection embellished with love and affection of a sister for her brother. This frail of thread is considered as stronger than iron chains as it binds the most beautiful relationship in an inseparable bond of love and trust. In addition, Rakhi also has a social significance because it underlines that humans should live in harmonious coexistence with each other. For a sister her brother is like that streetlight along the road; a brother who doesn’t make distance any shorter but lights up the path and makes the walk worthwhile. On this occasion, I wish all brothers and sisters happy Raksha Bandhan! May you all have a blessed celebration! Rajnesh Ishwar Lingam Nadawa, Nasinu

Peddlers and users have adopted innovative ways to beat the law. Their creative skills fill their pockets or fulfil their addictive “needs” respectively. Law enforcers are fighting an uphill battle based on archaic drug laws. The only changes are increased sentences. I think the drug laws need to spread their wings. One such area is when players get tested positive for drugs. Shouldn’t that equate to possession? Without possession, usage is impossible. Mohammed Imraz Janif Natabua, Lautoka

I had a very strange dream last night. It was the month of August, and all the honourable members of the august house were holding each other in their arms and crying and apologising to one another. And there was that song of Belinda Carlisle playing, I think I could hear something like: “They say in Fiji love comes first. We’ll make Fiji a place on Earth. Ooh Fiji is a place on Earth.” My Nadroga tavale think I might have had too much kava lately. What do you think? Mathieu Pelletier Sigatoka

Ami Kohli is right the Labasa Airport needs a carousel for incoming luggage. In the mean time the luggage handlers should just unload the luggage from the trolleys. One of the best things about Labasa Airport is that there is no unnecessary security checks and there has never been any incident on any flight from Labasa to any other airport. Sukha Singh Labasa

With the revelation by the women’s crisis centre that drugs is a catalyst to domestic violence, I would like to reiterate my earlier call that it be made mandatory by law to test violent crime suspects for drugs. That law will kill two birds with one stone. Mohammed Imraz Janif Natabua, Lautoka

Should it be called the Vodafone Kaji rugby championship? Well, watching through some of the games and media coverage, it looks like these children are playing like champs. I would rather call it the Vodafone Champions Rugby. After the lackuster performance against Samoa, our Flying Fijians need not look far motivation and enthusiasm. Floyd Robinson Toorak, Suva

The Tongan PM should be praised for raising the issue on people of West Papua. I believe it is a shame some leaders prefer to hide behind the sovereignty of Indonesia. Dan Urai Lautoka