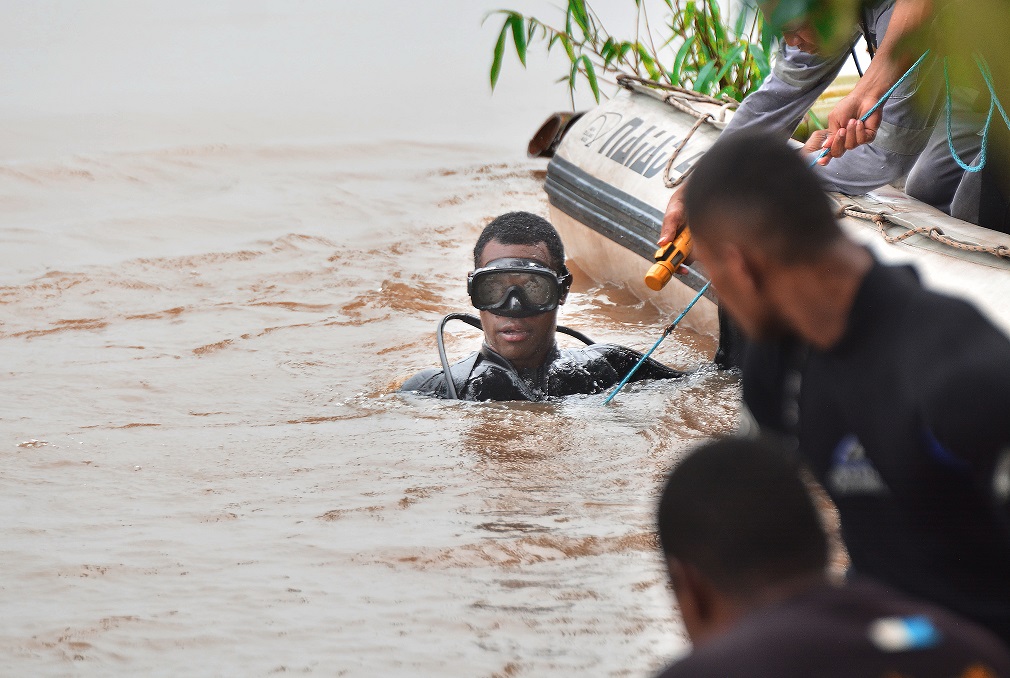 A Fiji Navy diver resurfaces after conducting his search for the vehicle 18 year old Tasleem Ali was driving in before crashing into the Rewa river. Picture: JOVESA NAISUA

THE Baulevu accident in which a car reportedly plunged into the Rewa River is quite shocking. Efforts to retrieve the lost vehicle has not been successful so far because we are told that the current is too strong and water is murky. Only the driver is believed to be inside the missing car and not four as earlier reported in the news. I think the adverse weather is also making the job of the police and navy divers much more difficult. Since the accident which happened last Wednesday, the divers had to call off the search because of poor visibility several times. Obviously the missing person’s family and friends would be very disturbed and worried too. It is not an easy situation for any family to be in. However, as I think, the search would only resume once the weather in the area improves and the river calms down. We pray that the unfortunate incident is solved as soon as practically possible. My sympathies are with the family of the victim. SURESH CHAND Nadi

FURTHER to Dr Neil Sharma’s letter (FT 28/04) on the benefits of medical cannabis, I believe it would make no additional harm to Government and the nation to trial medical cannabis. I believe Dr Sharma is absolutely correct in stating that archaic laws and assumptions are our problem. The world has moved forward when it comes to this medical miracle plant yet we are hell-bent about keeping the blinkers on. I believe medical cannabis is as natural as you can get and it is being used all over the world to treat and cure many different medical conditions. I have written to this forum several times about legalising medical cannabis as we have the perfect conditions to immediately cultivate the plant. It will be a great support for the ailing sugar industry. Instead of filling up our prisons with young productive men and spending a considerable amount of taxpayers’ money caring for them and fighting against the plant, I believe it would make more sense for the nation to take advantage of this God-given natural plant and promote its cultivation and commercialisation. I believe we are such hypocrites to allow two of the most deadly licit man-made drugs in alcohol and tobacco yet turn the opposite direction when it comes to the safer illicit drug in natural cannabis? I believe the political party that removes its blinkers first and campaign the legalisation of medical cannabis will win the 2022 General Election! The solution for such a predicament will have to be decided by the nation! SIMON HAZELMAN Savusavu

THE Lautoka City Council (LCC) is collecting backyard rubbish (free of charge) for the residents of Lautoka. I am grateful for this. One significant point that I noticed is the amount of rubbish that was/has been put on the roadsides. LCC gave out pick-up dates, which was well exceeded. But not to worry, they still collected them. I have a feeling that the LCC was overwhelmed by the amount of rubbish and like a schoolteacher said, “Dou, some gang’s back yard must look like a rubbish dump with the amount of stuff put on the road.” Anyway, may I suggest to the LCC to do the FOC pick up a bit more often because with the amount of rubbish out this time it will still cost the same and rubbish won’t stay on the roadside for this long. In some places the rubbish had been disturbed by scavengers and started to flow on to the roads. But thank you LCC for the community service. ALLEN LOCKINGTON Waiyavi, Lautoka

WE purchased a fridge in late 2016 from a well-known company in Nadi for $1900 as we were led to believe that this was a reputable company with good after sales service. The fridge gave us problem immediately after purchase but was replaced as it carried a two-year warranty. Just as the two years went the fridge failed to cool/freeze and when we approached the company, they said they did not provide spare parts or service repair and instead referred us to a third party who told us that the repair would cost $480 with a three-month warranty but the part would take several weeks to get here. We then Googled the part and saw that it was available in Australia for about $F45. We ordered the same and in total it cost less than $80. The fitting cost us in total approximately $120. Can the Consumer Council of Fiji and the Fijian Competition and Consumer Commission look into this so that the poor consumers are not taken for a ride. Companies selling products should carry or have access to spare parts and people to carry out service works at a reasonable price. Companies and firms who import consumer products into the country need to go through a product verification p

THE world-renowned theoretical physicist Richard Feynman was a lifelong learner. When Feynman was just 15, he taught himself trigonometry, advanced algebra, infinite series, analytic geometry, and both differential and integral calculus. By 23 there was no physicist on Earth who could match his command over theoretical science. He went on to work on the Manhattan project at Los Alamos in the US during the 1940s. He gave famous lectures on physics known simply as The Feynman Lectures on Physics. Feynman opposed rote learning or unthinking memorisation and other teaching methods that emphasised form over function which seems so common in education institutions. Clear thinking and clear presentation were fundamental requirements for his attention. In 1964, he served on the California State Curriculum Commission that was responsible for approving textbooks to be used by schools in California. He was not impressed with what he found. The most obvious example of how Americans have been dumbed down is through its failed public education system. Not that long ago, the US reigned supreme as a leading model for the rest of the world providing the best quality free public K-12 education system on the planet. But over the past many decades while much of the rest of the world has been passing it by, an agenda seems to have been implemented to condition and brainwash a population of mindless, robotic citizenry that simply does what it’s told, and of course the brainwashing commences early in the US schools. All you have to do is go to YouTube and check The Deliberate Dumbing Down of America by Charlotte Thomson Iserbyt. Feynman gave a speech to the National Science Teachers Association, where he showed how students could be made to think like scientists, be open-minded, curious, and especially, to doubt. In the lecture, he gave a definition of science, that he said came about by several stages. The evolution of intelligent life on planet Earth — creatures such as cats that play and learn from experience. The evolution of humans, who came to use language to pass knowledge from one individual to the next, so that the knowledge was not lost when an individual died. Unfortunately, incorrect knowledge could be passed down as well as correct knowledge so another step was needed. Galileo and others started doubting the truth of what was passed down and to investigate from experience, what the truth was. Can we use Feynman’s methods to learn and develop clear thinking on any topic? The answer is an unequivocal yes. Should the Ministry of Education at least consider this as a learning technique? Most certainly. But will it? That is the million dollar question. ARVIND MANI Nadi

Give him a chance

I SAY let’s give the Fiji Roads Authority CEO a chance. I bet with his modest salary he will be doing justice to us. Roads and bridges will be repaired. I’m sure the road signs will be given a bit more care when renewing them. Go for it Mr CEO, surprise us. By the way, I want to buy a hovercraft, how much does one cost? ALLEN LOCKINGTON Waiyavi, Lautoka

I HAVE seen a lot of road signs but never seen any “pothole” sign on any road. Anyway, I saw a post on Facebook suggesting all roads should have the name, number and address of the contractor who built it. They could also tell us how much was paid for the construction. SUKHA SINGH Labasa

I BELIEVE because of the extensive damage on the roads from the recent downpour, we now have pool holes instead of potholes. TOMASI BOGINISO Nasinu

CAN the Fiji Roads Authority please maintain the unsealed road from Kasavu to Napuka and Natuvu. I guess the previous contractor was doing a very good job. They knew what they were doing. What’s changed? A SHARIFF SHAH Savusavu

I WOULD just love it if Vodafone could clarify just how much, percentage wise, the bus company gets when I board the bus; use the card; take my ticket and sit down? Does the company get the full 68 cents or are there deductions for us having to go through the trouble of getting registered; queueing up to recharge and bearing the risk of a massive fine if we risk a ride without obtaining a ticket? If there are any deductions, could I be told how much please and who gets the money deducted? ALASTAIR WARD Tamavua