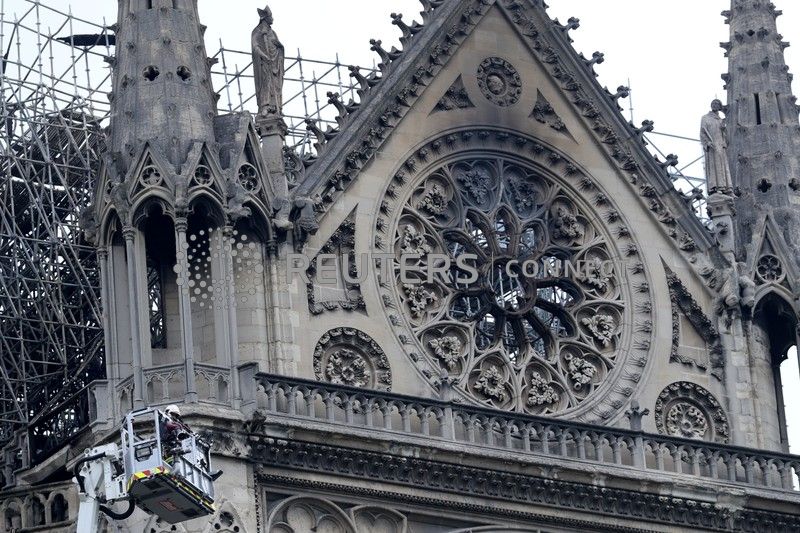 Firefighters work at Notre-Dame Cathedral in Paris, France April 16, 2019. A massive fire consumed the cathedral on Monday, gutting its roof and stunning France and the world. REUTERS/Yves Herman

How ironic for Mareko Vuli to quote John 12:8, in which Jesus said, “The poor you will always have with you,…”, yet sees it righteous to spend billions of dollars on a building over millions of starving children? It’s typical of many to quote out-of-context verses of the Bible, in particular, to suit one’s needs, so let me begin by quoting the whole text, “For the poor you always have with you, but you do not always have me”. Now the story begins with Mary, the sister of Martha, anointing the feet of Jesus with a pound of pure nard which is an expensive ointment. When Judas Iscariot saw this, he questioned why the ointment was not sold and given to the poor? The story goes on to tell us in verse 6 that Judas said this not because he cared about the poor, but because he was a thief, and having charge of the money bag he used to help himself to what was put into it. To answer your question Mareko, yes, as a true Christian, it would be proper to first meet the basic needs of mankind, before restoring the building, or even better, demolish it, and spend the money where it matters the most. Mareko obviously lacks the knowledge and purpose of Christianity. What I do in my neighbourhood Mareko is not for me to boast about and not for anyone to judge but the Almighty. Rajend Naidu quoted it perfectly when he stated, “What would Jesus think about it?” I ask, “What would Jesus do?” But then the Bible tells us clearly the answer. Jesus has never been in favour of heaping riches on this earth where all will one day be destroyed. In Luke 18, a ruler asked Jesus what he needed to do to inherit eternal life? To which Jesus replied in verse 22, “One thing you still lack. Sell all that you have and distribute it to the poor, and you will have treasure in heaven; and come, follow me.” Matthew 6:20 tells us, “But lay up for yourselves treasures in heaven, where neither moth nor rust destroys and where thieves do not break in and steal.” Ecclesiastes 1:14 sums all earthly glories as follows, “I have seen everything that is done under the sun, and behold, all is vanity and a striving after wind.” Every mountain and island will be removed and the sky will be rolled back as a scroll when Jesus returns so why would we want to build something that will one day be destroyed? Isn’t lives more important then than iconic buildings? For it’s lives that will be taken to heaven, not buildings! Simon Hazelman Rava Estate, Savusavu

I refer to Mareko Vuli’s argumentum ad hominem (ad hominem) letter on the issue of the rebuilding of the Notre Dame Cathedral (FT 22/4). If he cares to look at the issue in a less hysterical and more open minded manner he would find the following very illuminating: 1. “The billionaires” donations will turn Notre Dame into a monument of hypocrisy’ by Aditya Chakraborty The Guardian 18 April in which he points out “Handouts from France’s super rich make them look pious, and lend credibility to gross inequality…” 2. “Billionaires race to pledge money to rebuild Notre Dame. Then came the backlash” by James McAuley The Washington Post 18 April. 3. “Protesters say money to rebuild Notre Dame could be spent elsewhere” CBS News 21 April. There are of course many more articles in the international media in the same vein which can help Vuli out of his ignorance if he is interested. Rajend Naidu Sydney, Australia

The Social Democratic Liberal Party (SODELPA) have problems and if their concerns are fighting over petty and individualistic issues, then any overall success of the party will remain a far fetched dream. It is unfortunate that its members continue to toss up further complications within the party rather than doing good. It is because of such tussles by party members that the party has to suffer the most and such dire consequences will only lead to the party breaking up into pieces. The functions of a political party is basically to bring people together to achieve control of government and develop policies favourable to those that support them and at the same time organise and persuade voters to elect them into office. I believe SODELPA continues to publicly show that they are unable to deal adequately with internal party issues and it brings to question the leadership of the party, its true purpose, and the direction it is taking? I believe the very thought of SODELPA being in power is not only a scary one but truly disturbing! Simon Hazelman Rava Estate, Savusavu

I refer to “State expenditure and commentators” by Prof Wadan Narsey FT Saturday, 20/4. May I, through your column, implore the good professor to never give up on his commentaries regarding public policies in Fiji. I would concur with his “belief that economists’ best advance the public good when they act as watchdog on society and as community educators”. The good professor has been a lone voice for so long and in the interests of our beloved Fiji (this is not a racial or partisan issue) we need an open and very public discussion on the State of our nation. The political promises of vibrancy, dynamism and synergies that we have been sold on the coat-tails of equality by the FijiFirst Government will not materialise unless fearless intellectual rigour, scrutiny and raising community awareness by all (most especially, economists) is brought to bear on critical public policies and how they impact us all, now and into the future. Only then will we discover how much work needs to be done and where do we start. Are there any economists or organisations out there ready and willing to emulate the good professors’ reputation; most notably by way of serious scholarship and exemplary courage? Fiji needs you now! Mareko Vuli Wainibuku Rd, Nasinu

Rosy Akbar, our illustrious Minister for Education, Heritage and Arts has issued a dire warning to the principals that if their performance has not improved, they are in trouble. I am sure some of the principals may be losing sleep over it. But dear principals, have no fear — your knight in shining armour is here! About five years ago, I had met with the then Minister for Education, Dr Mahendra Reddy and expressed to him my concern about the decline in education and he suggested that I do professional development for teachers. I had met about 30 principals at a meeting in Nausori and talked to them about what makes a good principal great. They were quite impressed and gave me excellent evaluations about my ideas and were eager for me continue with it. But I was not given the platform to pursue the program so it died a premature death, much to our disappointment. Nonetheless, my interest in education has not diminished and if I see something that I see will benefit the educators, I send it to the PS (permanent secretary) for Education and she has graciously acknowledged my efforts. So, when I saw that the heat was on (or is it under?) the principals, I mulled over how I can help. And it occurred to me that I had attended a seminar, as a reporter for a newspaper in the US, in which a Professor of Educational Leadership had given a one-day seminar on what great principals do differently. The essence of the seminar was the platinum question — what are the specific qualities and practices of great principals which elevate them above the rest? Blending school centred studies and experience with working with hundreds of administrators, the Professor talked about things that the most successful principals do and that other principals do not. He also showed how each one of these effective practices can be implemented in any school. And the ever hungry student that I am, always brimming with curiosity to know more, I made copious notes. The Professor said any principal can fill a bookshelf with books about educational leadership. Any principal can study lists of guidelines, standards, principles and theories. The best administrators and the worst administrators can ace exams in their graduate classes. The difference between more effective principals and their less effective colleagues is not what they know, it is what they do. He asked several powerful questions from the perspective of great principals — What do they see when they view their schools and the people in them? Where do they focus their attention? How do they spend their time and energy? What guides their decisions? How can the others gain the same advantages? He said there was no one answer, or we’d all have it. So, here’s my challenge. Will the Ministry of Education allow me to share this with the principals? If the principals find it of value, they can implement it or they can disregard it as the random ramblings of a raving recalcitrant. The choice is theirs. If the ministry will allow it, how will I pass it on to the principals who may be feeling the heat of reprisal they had been cautioned recently about? Perhaps the principals can (if The Fiji Times will be so kind as to share my email address) send me an email at theinspiredteacher9@gmail.com. However, If the ministry does not approve for some reason, it will be “no skin of my nose” as they say in the US. Just trying to help. Arvind Mani Nadi

Roy Krishna became the first Fijian to score a goal in the A-League since the glorious days of former Ba and Fiji wonder boy Esala Masi. Fiji’s “lion heart” Roy scored his 50th goal in a pulsating Easter weekend against Melbourne City. The battle kicked-off with high expectations and higher stakes for Wellington as the carrot of a home play-off was dangling and tantalisingly in front of the hosts. Roy became Phoenix’s goal scoring hero as he sneaked in with his third goal in injury time and sealed a thrilling win. It was Roy’s night in Wellington and our Babasiga Lion was on fire! Well done Roy! Rajnesh Ishwar Lingam Nadawa, Nasinu

With so much hype about the Nabou Green Energy power, it just breaks my heart to see it closed down. So many promises were made during the opening speeches and all gone down the drain. How many people will be without jobs and how much is owed to the banks? Were any business assessments done before starting that power plant? Too many questions but none will be answered. John Brown Drasa Vitogo, Lautoka

With 1894 cases of dengue fever reported by the Ministry of Health, I wonder when will the ministry start mosquito spraying? Narayan Reddy Lautoka

I believe the soccer events during the religious annual conventions over the Easter weekend has attracted more spectators than Fiji Football Association sanctioned national league games or tournaments. It may be because of free entry or interest. Mohammed Imraz Janif Natabua, Lautoka

Yet another bomb attack has claimed lives of innocent people. In Sri Lanka the calm of Easter Sunday was shattered by gruesome bombings that killed at least 270 people in Sri Lanka. It is believed that the explosions blew out the tiled roofs of churches and hotel windows, killing worshippers and hotel guests. Watching the videos and pictures on social media was painful and I pray that the lost souls find solace and the grieving families find peace. Such a sad day for humanity! God bless Sri Lanka! Rajnesh Ishwar Lingam Nadawa, Nasinu