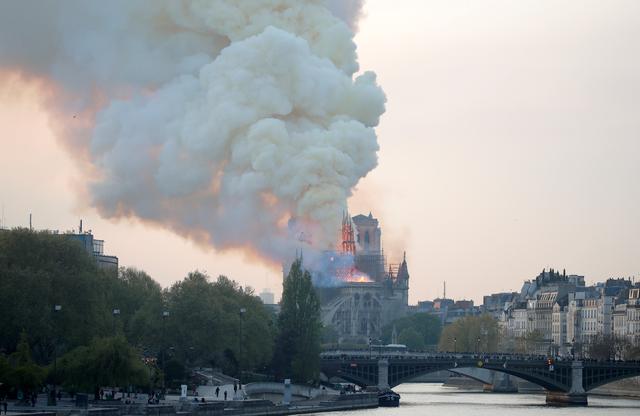 I refer to the letter “Mega donation” in the FT (Saturday 20/4). My question to Rajend Naidu of Sydney is: Do we just let the iconic Notre Dame Cathedral exist hereon in its burnout state until “all manner of unmet basic needs” of all the worlds starving children have been met before we rehabilitate it? Pontifications by the likes of you and Simon Hazelman reek of a brand of self-promotion by seeking to be controversial. Question is have you two self-righteous people recently done anything to satiate the “unmet basic needs” of children in your neighbourhoods? In John 12:8 Jesus himself said “The poor you will always have with you …” So knock it off with you two and just be grateful the cathedral will be rehabilitated to its original glory without any contribution from you two; yet it will be there for you two to marvel at if you two do happen to visit Paris.

After submitting my letter “Urgent need” (FT April 12), all of last week I looked out for letters from like-minded readers who agree public transport needs to be promoted with subsidies to bus and taxi operators while tax on private vehicles need an increase. But there was not even a response from naysayers who must believe private motoring is an engine of Fijian economic growth, there should be a car or two in front of every dwelling and our roadways need to expand. Reporter Felix Chaudhary, whose earlier piece on the urgent need for bus fare increase motivated my letter in opposition, went on last week to write about an “Urgent need for people to watch their health” (FT 18 April). That is so true and of course our health trumps any urgent need to address the transport dilemma. Looking further between so many daily motoring adds in The Fiji Times, I read Prof Wadan Narsey’s two-page warning about the national debt (FT 20 April), and an eye-opening observation by current Reserve Bank of Fiji governor Ariff Ali (FT 19 April) that total cost of imported vehicles has increased four foldover the past five years and fuel now amounts to nearly a quarter of Fiji’s imports. But apparently nobody wants to raise tax on private cars and powers that be have no appetite for lowering bus and taxi fares. So let’s spend lots more on roads! I believe there is no urgent need to promote public transport, any more than there is an urgent need to combat global warming. Willard Miller Suva

I agree with our writer Kolinio Vunaki (F/T 20/04) that our local journalists must hold on to the principles of journalism and report the truth. Journalists and newspapers play an integral role in letting Fijians know about what’s happening in our back yard and if the truth is not disseminated then people get a false picture about the status of our country and for this reason I stand and salute The Fiji Times for standing up to the principles, dignity and ethics of journalism for it takes the number one people’s newspaper to stardom. Thank you so much The Fiji Times for maintaining this integrity and for not letting us down with unfair and one-sided biased reporting. I respect The Fiji Times for being bold and courageous and for being an excellent watchdog for readers! Hail and bravo! Rajnesh Ishwar Lingam Nadawa, Nasinu

Laisenia Qarase and Sitiveni Rabuka need to do one thing and one thing only. The two former prime ministers have run, won, and completed their race, and I believe the circumstances that brought them success at the time, no longer exists. I believe it is a very different era and today’s circumstances do not suit their ideologies. It would be sensible to retire gracefully and enjoy the life they have left with loved ones. The horses they were riding bolted long ago and it was then that they should have dismounted! Let it go! Simon Hazelman Rava Estate, Savusavu

I was sent to buy hot cross buns on Good Friday. I decided to go to town and was surprised when I saw the long lines at the bread shops. I decided to go to an out of the way bread shop and was surprised to see a long line there also. I then went to a few more bread shops and some had run out of buns and some had long lines. I decided to go to the bread shop in Waiyavi (just near my home) and the line was longer than the rest. Just as I was about to go home empty-handed, a friend walked out and said that he had been all over town and the lines were long. When I got in the line, a former workmate, Filipe, was standing and he just said, “Boso, I too went all over town looking for hot cross buns and ended up back in Waiyavi.” I just said, “Isa, the hot
cross buns have no significant religious meaning and we went all over creation to look for it.” A blessed Easter to all of
you. ALLEN LOCKINGTON, Kava Place, Waiyavi, Lautoka

FOR Christians, Christ’s sacrificial death on the cross to redeem fallen humanity would not be complete if he did not rise from
the grave on Sunday after His Sabbath rest. His resurrection should make all believers shout for joy, because it means his
sacrifice and redemption on our behalf has been accepted by heaven. Jesus has indeed paid the debt he did not owe!
His resurrection has given us an assurance that those who believe in him will also be resurrected when Christ returns in the
clouds of heaven to take his people home. Paul said it all when he said that if Jesus was not resurrected from the grave, all the Christian faith and its activities would be just a big waste of time. It is this empty tomb that sets Christianity apart, that we serve a God who not only created us, but redeemed us as well and is ever present to hear our prayers and meet our needs. May Christ’s resurrection move us into a deeper personal relationship with Him, as we allow the words of that Gospel song: Because
he lives, I can face tomorrow, become a constant reality in our lives. SAVENACA VAKALIWALIWA, Suva

Your front page picture featuring the Dean, the Rev Tomu Asioli washing Ms Anne Fong’s feet at the Holy Trinity Anglican Cathedral, Suva brings us to the heart of the message: the example of Christian service for all to see — given by Jesus to the disciples (John’s Gospel 13). We must see it as a dramatic commentary on the death of Jesus. Jesus knew on the evening of the Passover Day that it would be his last night on Earth. The washing of the feet is a drama of what Jesus’ followers are to be and do. He has given an example which the disciples are to follow, and what a radical example it is! “If I your Lord and teacher have washed your feet, you ought to wash one another’s feet.” The action of Jesus overturns the regular hierrchical structure. The accepted patterns of authority are redefined in new and vivid images — a towel and a basin. The message of Easter is that following Jesus’ examples “you ought to wash each other’s feet. I have given you an example to follow; do as I have done to you”. This means creating a community of equals where the status of superior/ inferior is reversed in the act of service. The pattern the world demands is a pecking order in which everyone knows his or her place and which is carefully protected. Jesus did challenge and reject such power structure in favour of a new kind of ranking and equality. The disciples saw that their Lord took on the role of the slave. When people have a share with and respond to his cleansing death, they constitute a community where such reversal of roles is the norm and not the exception. The presence among the disciples of one who will betray Jesus is mentioned twice in the story. Yet the betrayer, Judas, is not named. He is not singled out. The fellow disciples did not know who the guilty one is in their midst. The disciples are not told to wash only the feet of those they think are faithful and ignore the rest. In fact they are told to serve the betrayer in their midst just as Jesus does. The incident of the washing of the feet shown on the front page provides real depth for understanding the new commandment Jesus gives, “Love each other just as I loved you”. Rev Akuila D Yabaki Suva

THE people living at Kashmir in Lautoka have been affected by the landslide from the development that is happening on top of the hills. I have been personally attacked and labelled as a person who is against development. Yesterday, the houses located at the field 40 new development faced the same fate as the people of Kashmir subdivision when mud water entered houses and damaged compounds. The sad part is that the developer or in that case nobody compensated the affected residents. Can the Minister for Waterways please visit the two subdivisions and help the people. Narayan Reddy President Lautoka Ratepayers Association

CAN the organisers of the soccer matches please clean up and dispose rubbish properly. We the people of Lautoka take pride in the cleanliness of our city. Please do not throw used containers in the drain. John Brown Drasa Vitogo, Lautoka

A LOT of money is being spent on drainage improvement and dredging of rivers. This is all in the effort to control flash flooding and flooding during cyclones. Whatever we do, the fact remains that those living in low-lying areas and near rivers are flood prone. Mohammed Imraz Janif Natabua, Lautoka

“Australia is the safest country in the world for women” (Jessica Yun, Yahoo Finance, April 18, 2019). I wonder what domestic violence advocates in Australia make of that? Rajend Naidu Sydney, Australia

I wish to congratulate the 2019 Coca-Cola Games champions, ACS and RKS. I only wonder if the two schools will want to share part of their prizes to those rural schools that were sources of some of their best athletes. It was through them that they were able to recognise these students. They were namely, Best Female athlete Naomi Sigaruarua, Linieta Bokadi and Kesaia Boletakanakadavu who took the tracks by storm during the three-day event. Adi Cakobau School made an extremely brilliant performance by taking a clean sweep in the girls division. I just hope and pray that they will not forget these schools that were their source of blessing and also be a source of blessing to them. Kelera Talebulamai Naitasiri