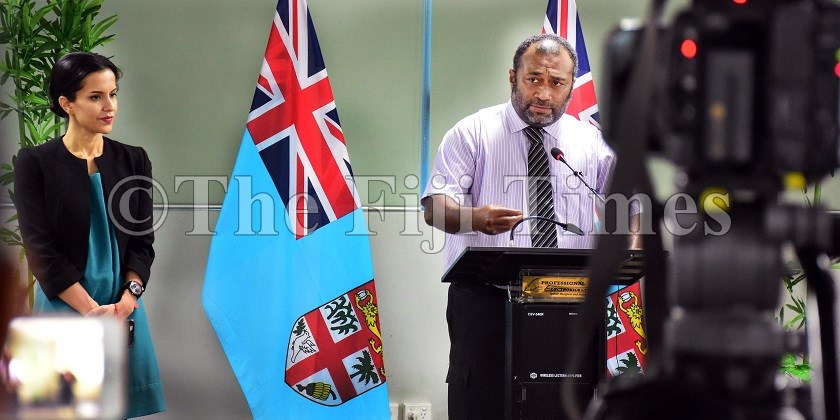 A very impressive press conference was held by the Health Minister (01/04). He humbly continued answering questions raised by members of the media after he had called for a last question. An accommodative approach. MOHAMMED IMRAZ JANIF, Natabua, Lautoka

The so-called COVID-19 began in Wuhan, China. A month later, China was compelled to effectively put in place lockdown areas to try and alleviate its infection. Then, it spread to Iran, Italy and the adjoining European countries which in turn exercised lockdowns as quickly as could be done. The lockdown syndrome also jumped into Asia as the COVID-19 continued to spread its wings into Indonesia, Singapore and neighbouring countries. In January 2020, it surfaced in the USA and is now still spreading to the adjoining states with the number of infections increasing rapidly. Same to the other countries, lockdowns were put in place. However, all these countries have great cities that during normal hours of the same period, would be congested with traffic day in day out. Within a good three months minimum lockdown, the level of traffic emissions from each of these countries’ cities would enormously decrease. That is excluding large individual factories and concentrated industrial areas. Although, this pandemic is scary and economically attacking us across the globe, simultaneously, a positive undertaking is taking place right at the core of its containment. Furthermore, the pandemic is clearly messaging us the importance of maintaining our health by energising our immune system with an appropriate diet. Samu Silatolu Nakasi

The American football game has four quarters — 15 minutes each but the game lasts three hours. This is because of timeouts and numerous commercial breaks. The first three quarters are pretty mediocre but the momentum picks up in the last quarter. My life has been somewhat similar. I have just entered the fourth quarter today. Each one of my quarters is 25 years. My first quarter was quite ordinary. I went to school, earned a college degree and was enlisted by Cuvu Secondary School as a science teacher. I taught there for seven years. Then my father started hounding us to move to the US — a decision I made with great reluctance and have regretted ever since. My second and most of the third quarter were spent in the US where I worked at jobs which paid my bills but never gave me fulfilment of a vocation such as teaching where one can improve lives. During the third quarter of my life, I started to feel deeply dissatisfied and had an overwhelming desire to come back home. I convinced my wife to do the same. We have been in Fiji for the past 10 years of the third quarter. I enjoyed a brief stint as the Group HR manager of a premier retailer but left due to a conflict of ideologies. I would probably have still been there had it not been my lack of tolerance for corporate BS and a lack of empowerment to make any changes which would have befitted them. Today, I begin the fourth quarter of my life. Yes, despite the coronavirus, the fourth quarter is already looking exciting for me. I do not want to just live to a 100. Anyone that takes good care of his health can easily do that. I would like to leave a legacy that I have made a significant difference. Since I am my own boss (well, that is not technically correct as I have one at home which is the reason I have an office (a welcome respite from domestic chores) where I lose myself in the profound wisdom of my favourite books, and work on self-improvement programs. I look forward excitedly to the fulfilment of making a difference in people’s lives and make this the best quarter of my life at the same time. Arvind Mani Nadi

Where’s it written down?

Fiji is now facing what is likely to be a significant breakout of the coronavirus. We all have our parts to play. As citizens we are all told to practise handwashing, social distancing, limit our movements and so on. It is now many weeks since the Government began communicating with the public on the coronavirus. It is more than 10 days since the so-called “Lautoka lockdown” and orders restricting gatherings of more than 20 people. More recently a 10pm to 5am curfew has been put in place. But nowhere can I find – not in the Fiji Gazette, not on a Government website (not even in the Fiji Sun!) — evidence of any written direction on these things. In a situation such as this, if the Government is not going to declare a state of emergency, but it wants to restrict the movement of people and prohibit large gatherings of people, the law requires an order to be issued by the Permanent Secretary of Health with the approval of the Minister of Health (s.69(3)(a)(v) of the Public Health Act). The Public Health Act says that these orders should be brought to the attention of those to whom they are addressed by personal service. That normally means they must be delivered to people individually. Where (as here) the orders are directed at all the people of a city or country, one would expect them to be published in the newspapers so that everyone knows what is required. The notices should probably also be published in the Fiji Gazette. Even though only a few people actually read this, publication in the Gazette is deemed to be notice to everyone. In this way if the Government needs to prosecute anyone for disobedience, it doesn’t have to prove that the accused had actual knowledge of the permanent secretary’s order. The notices required can all be drafted in one or two pages. I assume the Health Ministry has better things to do right now than worry about how an order should be worded to meet legal requirements. That is why it has the office of the Attorney-General to assist it. No properly-run government can say “this is an emergency, we don’t have time for the paperwork”. After all, in the last week or so, we have been able to do many legal things. We have called Parliament. We have changed page after page of laws. These changes reduce stamp duty on mortgages, increase Public Health Act penalties and increase taxes on gasoline. We have even been able to issue notices reappointing members of the Electoral Commission. But where is there any kind of notice from the Health Ministry telling people exactly what is involved in lockdowns, national curfews, or limits on how many people can gather? The people of Lautoka, for example, appear to be “locked in” rather than “locked down”. This means that while they (mostly) cannot escape to infect anyone in any other part of Fiji, they appear to have at least some freedom to circulate inside the Lautoka boundaries and infect each other. But if the Government is going to restrict people from doing things (and threaten them with prosecution if they don’t follow) we have to know what the Government means. How can people know this if the Government won’t write it down? RICHARD NAIDU Suva (Mr Naidu is a Suva-based lawyer who does some work for The Fiji Times — Editor)

Could the good doctors tell us what happens to the coronavirus if you cough it on to your own elbow? Does the virus stay on the elbows or it can also move up and down the arms? Sukha Singh Labasa

One thing I’ve noticed lately is the amount of biblical texts that flooded social media in the wake of COVID-19. I just wonder how many lived up to it? Pita Soroaqali Rakiraki

I believe the COVID-19 Supplementary Budget was disappointing for workers. I believe many countries raised a supplementary budget which directly assisted workers through their take-home pay while Fiji directed workers to FNPF. Dan Urai Lautoka

Work from home should continue even after everything normalises. It surely will lessen the sick leave. Oh, it reminds me of the time when I was asked to explain to an Australian chief engineer at Fiji Forest Industries why I was drinking on sick leave — I told him sick leave says unfit for work, not unfit for drinking! Sukha Singh Labasa

Am I getting this right? After 10 years of unprecedented economic growth and the Government is asking for donations from the public? I personally will not donate one cent unless the Cabinet ministers, CEOs, assistant ministers, Speaker and the President cut their salaries by 60 per cent. Gabe Simpson Rakiraki

BEFORE the supplementary budget announcement we were informed that the price of fuel would come down substantially. However, I believe the 20 cent tariff increase on petrol and diesel has denied the consumers the full benefit of the price reduction. So in a way, one can say that the threat from COVID-19 has created an opportunity for the government to raise some much-needed revenue. However, my question is: will the duty revert to its previous rate if the global price of petroleum products spikes up again once the economy bounces back? SELWA NANDAN Lautoka