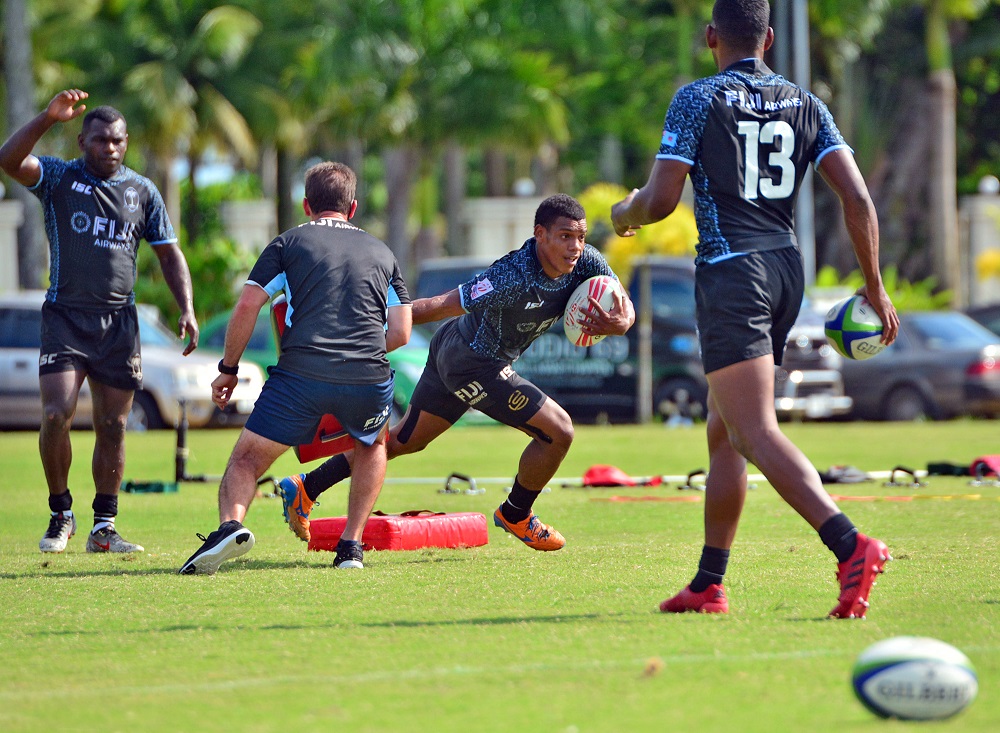 Napolioni Ratu runs away from the defence of head coach Gareth Baber during the Fiji Airways Fiji mens sevens team training session at Albert Park in Suva. Ratu has been named as one of the new players for the HSBC Hong Kong and Singpore 7s leg. Picture: JONACANI LALAKOBAU

Veteran artist Kameli Rakoko summarised his article perfectly in yesterday’s The Fiji Times with these lines “Baber has one of the best Fiji sevens combination in the competition but he has been let down by indiscipline off the field. He badly needs players with good leadership qualities on and off the field. Ryan was lucky he had the leadership of Kolinisau who set the pace for discipline on and off the field because of his strong Christian upbringing”. I agree with Rakoko and I know that for our boys to stand any chance of that historic 5-in-a-row at So Kon Po, discipline will play a vital role. Our boys get easily distracted and they must be nurtured to leave all the celebrations and funtime at the conclusion of a tournament and not after every pool match. Fiji has assembled the best 14 players but the services of Kunavula, Nasoko, Nacuqu, Ravouvou and Nasilasila will be sorely missed. I believe that the match against the hosts would have given Baber a fair idea of who his best 7 would be! As we count hours, all the best to our boys! Rajnesh Ishwar Lingam Nadawa, Nasinu

Just when the naysayers are blurting it out and clearly writing off Fiji, the boys will put on a show and dispatch the weekend’s duties, like never before. Fiji sevens has copyrights over the HK 7s cup. Anyone else taking it will be breach of the copyright act (that is yet to be written)! There are laws governing copyright breaches. Positive, brethren. Donald Singh Lautoka

My dad, a pensioner, was chatting around the tanoa about the Golden Pensioners’ Day hosted by FNPF at the Grand Pacific Hotel on Saturday. He was happy he attended and also that pensioners were not forgotten. He mentioned the music entertainment, free breakfast/lunch and plus free medical check-ups. Midway through the conversation, one of the working gentleman interrupted. Gentleman: “So whose money is funding the event?” Dad: “We, the pensioners.” Gentleman: “Are you telling the truth?” Dad: “See, when you were still in napkins we were funding the FNPF.” LOL…vinaka pensioners. Toso Viti toso. Jonas Bradburgh Makoi, Nasinu

On behalf of some 400 pensioners, I write this open letter to the management of FNPF to express our deep appreciation for their hosting of the inaugural Golden Pensioners’ Day at the Grand Pacific Hotel in Suva on Saturday, March 30 2019, between 9am to 2pm. The program started with a prayer at 9am as the enthusiastic pensioners kept pouring in. The entire day’s function was immaculately planned so that pensioners enjoyed every bit of it. Matua Rooms one and two had the following: 1. Ministry of Health check-ups: dental and optical; 2. Chiropractic services; 3. Spa treatment; and 4. FNPF Services. In the marquee on the lawn was a musical band, refreshments and a kava corner. Bingo game proved to be popular. Not all could access the services provided as pensioners had to wait in long queues. Some drifted on to the lawn and enjoyed talanoa with their old friends. Some pensioners were really very sick and had to be helped along with their relatives. But nonetheless their spirits were not dented and they enjoyed the camaraderie. Many pensioners recalled the manner in which their pensions were unilaterally drastically reduced and leaving them no room for seeking redress in the courts. Some even shed tears with the manner in which they were treated by the authorities at the time. However, the new crop of administrators at FNPF are showing more milk of human kindness. Many hoped that their pensions may be restored while the others simply shook their heads in despair. The FNPF staff members at the function deserve to have a special mention for their efficiency, courtesy and prompt response to any requests from the pensioners. Our hearty thanks. The lunch was excellent and the pensioners enjoyed it to the hilt. The hotel staff members were very approachable as well. You made our day great indeed. Many of us could not have afforded to go their on their own. God bless. Dewan Chand Donu Place, Namadi Heights, Suva

Thank you Sukha Singh for your letter. On one hand the Government says civil servants who reach 55 should retire to make way for new blood, so to speak. Then, madam Education Minister Rosy Akbar says that age should not be a barrier from enrolling in an education program. Coming from Government, I find these to be contradictory in that on one hand people are being retired at 55 and on the other she says that age should not be a barrier for education. Huh? Does this mean that those people who have graduated after reaching 55 years of age may not/ will not be able to get a post in the civil service? For me learning has no limits, I have read of people who graduated when they were in their 80s. In Fiji older civil servants do go and pursue degrees to advance in employment only to be shot down by the 55 age barrier. I wonder how many have said, “I will not join the civil service because I will have to retire at 55”. Remember people are living longer and that adage life begins at 40 has changed (according to me). 60 is the new 40. ALLEN LOCKINGTON, Kava Place, Waiyavi, Lautoka

The solution to fighting cancer is a simple one and it requires discipline and a strong willpower. There is no doubt that what we eat and drink has a huge impact on the risk of developing cancer. Let’s not fool ourselves into believing otherwise and we can go on talking about it untill the cows come home, but the fact remains in that eating too much processed foods and beverages high in fat and sugar is causing all sorts of non-communicable diseases (NCDs), including cancer. We are literally our own worse enemy. We succumb to diseases by our very own irresponsible and careless behaviour. Fighting NCDs and cancer is one of discipline and a strong willpower to only consume healthy nutritional food and beverages. Otherwise no gains will be made! Simon Hazelman Rava Estate, Savusavu

I believe people who had come to watch the Vodafone Premier League match between Nadi and Lautoka at Churchill Park on Sunday returned home unhappy because the game was called off because of the ground not marked. I don’t know what happens to the tickets purchased by the spectators. The referees reportedly inspected the ground and noticed the missing markings. According to reports, the match was delayed by an hour but the weather was not good, too. The Fiji Football Association CEO Mohammed Yusuf says the ground was booked weeks in advance. Both Lautoka City Council and FFA should find a solution to make the spectators happy rather quickly. Let such thinks not happen again because it discourages people from coming in. This is not good. Suresh Chand Nadi

Age is a barrier for civil servants completing their studies in their fifties. They retire at 55! Our decisions have to be realistic in life. Mohammed Imraz Janif Natabua, Lautoka

I read with interest news published in yesterday’s The Fiji Times. The first one revealed the sad state of Koro Island and the fact that repairs remained a top priority. Then the news of more women studying in male dominated fields warmed hearts. Recently 60 per cent women graduated from USP, which was a positive sign as far as empowering women is concerned. On the other hand, last year’s HK 7s darling and the “eye” of the Blitzbokke side Selvyn Davids praised our 7s team and the players who were fast and skilful. These and many other stories brightened my day. Thank you The Fiji Times for the inspirational stories! Rajnesh Ishwar Lingam Nadawa, Nasinu

It is very fitting that Fiji Police Force officers are receiving training on advanced sexual assault investigations from the Naval Criminal Investigative Service ( NCIS ), USA ( FT 1/4 ) because from the US Navy Institute reports that is a very rampant problem in the US Navy. They have clearly developed expertise in investigating and addressing it. Rajend Naidu Sydney, Australia

That moment we have all been waiting for has arrived. It’s make or break time. The time to cry havoc and let slip our dogs of war. All the best boys. Simi Kuruvoli Cunningham, Suva

Does Biosecurity Authority of Fiji have any knowledge of how termites spread from Lautoka to Labasa? These two places are far away and on different islands. Surely they have not flown that far. Mohammed Imraz Janif Natabua, Lautoka

Everyone wants a pay rise but the majority are not making an effort of being productive and efficient. Coming to work just to put in the time is not good enough. We already have a huge problem with unproductive wages. Before one expects an increase one needs to ensure that they earn their keep. Simon Hazelman Rava Estate, Savusavu

I had been asked to watch the televised live parliamentary sessions. Oh how different when Ratu Epeli is sitting in the chair. I salute you Ratu. Allen Lockington Kava Place Waiyavi, Lautoka

Hon Rosy Akbar says age should not matter but Hon Premila Kumar said she wants younger CEOs to run the town councils. The voters are pushed and pulled by contradicting statements from the Government. If age was not a problem then why was I forced to retire at 55? John Brown Drasa Vitogo, Lautoka