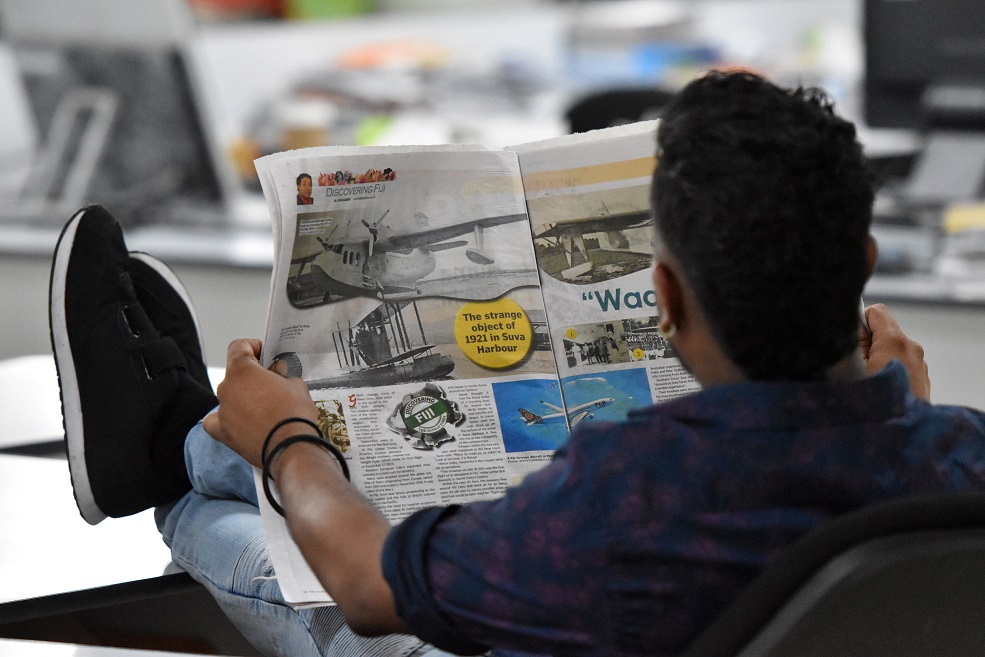 As usual, John Kamea’s The Sunday Times feature “Discovering Fiji” always brings to the fore, often forgotten and sometimes not so well-known pieces of our colourful history. The piece titled “Waqa sa Vuka” in ST 11/04, was an interesting one on our aviation history. It’s a real pity that the Kingsford-Smith Pavilion that was on the west side of Albert Park and the Southern Cross Rd running between the park and government buildings, are now no more –– at least the names. The pavilion was demolished a few years ago, in the redevelopment of the park and replaced by the new grandstand on the opposite and eastern side. The road is still there, but was renamed. As we all know, both were originally named to commemorate the historic landing in Albert Park in 1928 of the airplane the Southern Cross, flown by the iconic Australian aviator Charles KingsfordSmith, enroute to Australia from the US. There is now no visible commemoration of that historic landing, except in our written history and in the occasional nostalgic articles, like this one by John Kamea. On the margins of that article, let me just ask whether the important role of Harold Gatty has been commemorated in any way, such as naming something after him. It will be recalled that he established Fiji Airways back in the day. It later became Air Pacific and now renamed Fiji Airways again. It seems more appropriate now, than ever before. Edward Blakelock Admiral Circle, Pacific Harbour

Allow me this one moment in time to say, bahut bahut shukriya to all members of the Muslim community at Enamanu Cemetery for your admirable working bee of at least 50 men and youths. Thank you for your sterling effort in cleaning your loved ones’ graves. Your exemplary efforts preserving deceased loved ones’ graves are commended and congratulated, with all sincerity. Yesterday, Sunday, April 11, 2021 my family, in union with the Nadi Chinese Community took flowers with treasured pride and respect, to the graves of our deceased loved ones, all at rest. Before 7am, as my family approached the privately- given land for Enamanu Cemetery, we couldn’t help take notice of members of the Muslim community hard at work cleaning their section. My sincere thanks must also go to the leaders of the Nadi Chinese Community in leading us to richly continue preserving our culture, heritage and traditions. Thank you to all families that make annual sacrifices caring for our final resting place which is fast filling up. The general section of Enamanu Cemetery is full. The onus for the FijiFirst Government is to assist all people of Nadi with a new cemetery plus correctional services bury our dead; maintain ––– preserve graves; keep official records. Nadi does not have these government cemetery land and related burial services. I encourage members of all communities with loved ones, at rest, in Enamanu, take some pride and respect to preserve our cemetery. The Nadi Chinese Community is hurt from time to time by irresponsible individuals breaking padlocks and forcing open our main gate. One section of our fences were damaged by fire some months ago. Repairs have since been done. Can we please respect our deceased loved ones? Ronnie Chang Martintar, Nadi

People will soon start enjoying another level of shopping experience when the doors to the multimillion-dollar FNPF shopping complex opens its doors in the heart of Nadi Town. Fiji National Provident Fund must be commended for investing in one more revenue-generating commercial project in the West. At the back of this large commercial centre lies land which is believed to be earmarked for building a similar project by Vinod Patel. We applaud the investors for having faith doing business in the Jet Set Town of Nadi. People find such shopping centres user-friendly as their various shopping needs are fulfilled without the need of touring the whole town. RB Patel is one of the first tenants confirmed to be opening their supermarket in the FNPF complex. Their banner hanging on the wall of the mall tells us that the supermarket will be opening very soon. A variety of food courts are also expected to be a part of this complex which many eagerly wait to open. Surely this part of the town is expected to wake up as soon as the centre becomes operational. Customers need not worry as the centre has an in-house parking facility as well. At this juncture, I think, it is important to remind the authorities concerned to consider reverting the town’s main street to two-way traffic sooner rather than later. Our council must fight hard to see that traffic movement in the town is made better. But, until we open more roads and bridges our town’s traffic congestion is not going to go away. Again, I think if we had elected councillors things could have been different. Suresh Chand Nadi

A gentleman to remember

As we mourn the death of Prince Philip, he was truly a man deserving a “king” title and a gentleman to remember. Very humble and quiet, never got to hear about him in the limelight, and also visited our Fiji with the Queen lighting up the GPH.Interestingly some unique stats leading up to his death. He died on April 9 and on  exactly 99 days in 2021 plus at a remarkable age of 99. As we all know nine is a complete number and it is only befitting that our most loveable “king” was a complete gentleman.Our prayers with the royal family and the Queen.  SHALWYN PRASAD Mukta Ben Place, Nabua, Suva

SOME say it’s for everyone’s safety and protection while others say, the nation can’t afford to be held to a
standstill for the sake of an irresponsible few. DAN URAI Lautoka

Mr know it all

Steven Chandra, it’s not about knowing it all, it’s simply about common sense, experience, good judgment, and behaving in the most practical and sensible way. Too many are set in their ways and continue to believe and do something when there is evidence to suggest they would be better off thinking and acting differently. Too many are unable to change. Agriculture, horticulture, fisheries, and manufacturing, rely heavily on our tourism industry. Without tourism these industries, and others, are also vulnerable. Tourism is therefore our key driver of economic growth. No government, no professor, past, present, and in the near future will be able to run the economy without tourism and that’s the fact. Not anytime soon. As for calling the legalising of marijuana, I stand to continue to say so. The best possible way to deal with the issue is to legalise it, like we’ve done with tobacco, alcohol, and yaqona. Anyone who has tried and experienced all, including marijuana, knows all too well that all do the same thing, they alter the state of the mind. What makes marijuana different? Steven, if you think marijuana is not already out of hand, then you really don’t know the reality of the situation. It’s the very reason I’m saying to legalise it, that we be able to take control of it and handle it better, in the same way we doing with other legal substances. At present, because it is illegal, many people like you are in the dark of the reality of where we are with marijuana. The fact that you are living in Suva and you don’t know this, confirms to me that you have no clue whatsoever. And by the way, marijuana and hemp are huge versatile industries, able to produce many products with its seed, oil, and fibre. It can be used to make textiles, building materials, paper products, bioplastics, and much more. Medical marijuana is now a huge industry. We have the perfect conditions, we have lots of vacant arable lease land, so why not? Many other countries are benefiting from it so why not us? Fiji medical marijuana and Fiji hemp products will make it big time. I believe anyone who sees marijuana as evil and bad, have blinkers on, are naive, old fashioned, and incapable of accepting change. Wake up to reality Steven! It’s just a natural plant! I also didn’t say that no other party is able to lead our country. I questioned and doubt that any other party will be able to do any different from what FijiFirst is doing, certainly not in our current situation without tourism. It’s better for us citizens to deal with the devil we know than the devil we don’t, apart from a couple of them whom we know who’ve failed in the past. So let’s carry on with the status quo instead of wasting time, effort, and money. Steven, tell with clarity and substance, how you think another party will make a considerable difference without tourism? You say I lack thinking power? Let’s see what your thinking is all about? Get out of your box and maybe try a joint, you may be surprised how clear things are, and may change the way you think! Simon Hazelman Rava Estate, Savusavu

Even if there was no US Department of State country report on human rights in Fiji, clear thinking people of Fiji, at home and abroad, know what the true human rights situation is in post-coup Fiji. And, no amount of weasel words from the Fiji Human Rights and Anti-Discrimination Commission director Ashwin Raj can distort the truth or alter the facts. Fiji can, however, become a better country for its people if the criticisms made in the US report is accepted and acted upon in the spirit in which it is offered. See John Kamea’s excellent elaboration on this theme in his article “The value of accepting criticism” in The Sunday Times, April 11. Rajend Naidu Sydney, Australia

Removing curfew hours will create a lot of jobs in restaurants, nightclubs and other outlets. Pointless waiting for the bubble to open. Let’s build from within. Dan Urai Lautoka

A slap on the wrist

THE 2020 report on human rights issued by the US Department of State is a slap on the wrist on the director of the Human Rights and Anti-Discrimination Commission. Whether it’s a shake up or shake down on the HRADC, it simply means there are loopholes in the system. By the way it’s never easy to be an independent commission. AREKI DAWAI Suva

I wonder if my old Marist St Columbus and Suva soccer teammate Vijay Madhavan (FT 29/3) has read the 1997 Fiji Government and UNDP Fiji Poverty Report which analysed the extent and nature of poverty in Fiji? If he had he would have had an understanding of the structural nature of poverty in the country which is not in the hands of an individual social welfare officer to reduce. I believe that is a matter for an appropriate national poverty reduction policy to tackle. And, that in turn requires an appropriate political will. The late Fr Kevin Barr, an expert on Fiji poverty, often decried the lack of it. Rajend Naidu Sydney, Australia

AS per Ashwin Raj’s statement, I wonder what would have been the contents of the 2020 report on human rights in Fiji which was issued by the US Department of State if independent institutions such as the Fiji Human Rights and Anti-Discrimination Commission were consulted? MOHAMMED IMRAZ JANIF Natabua, Lautoka