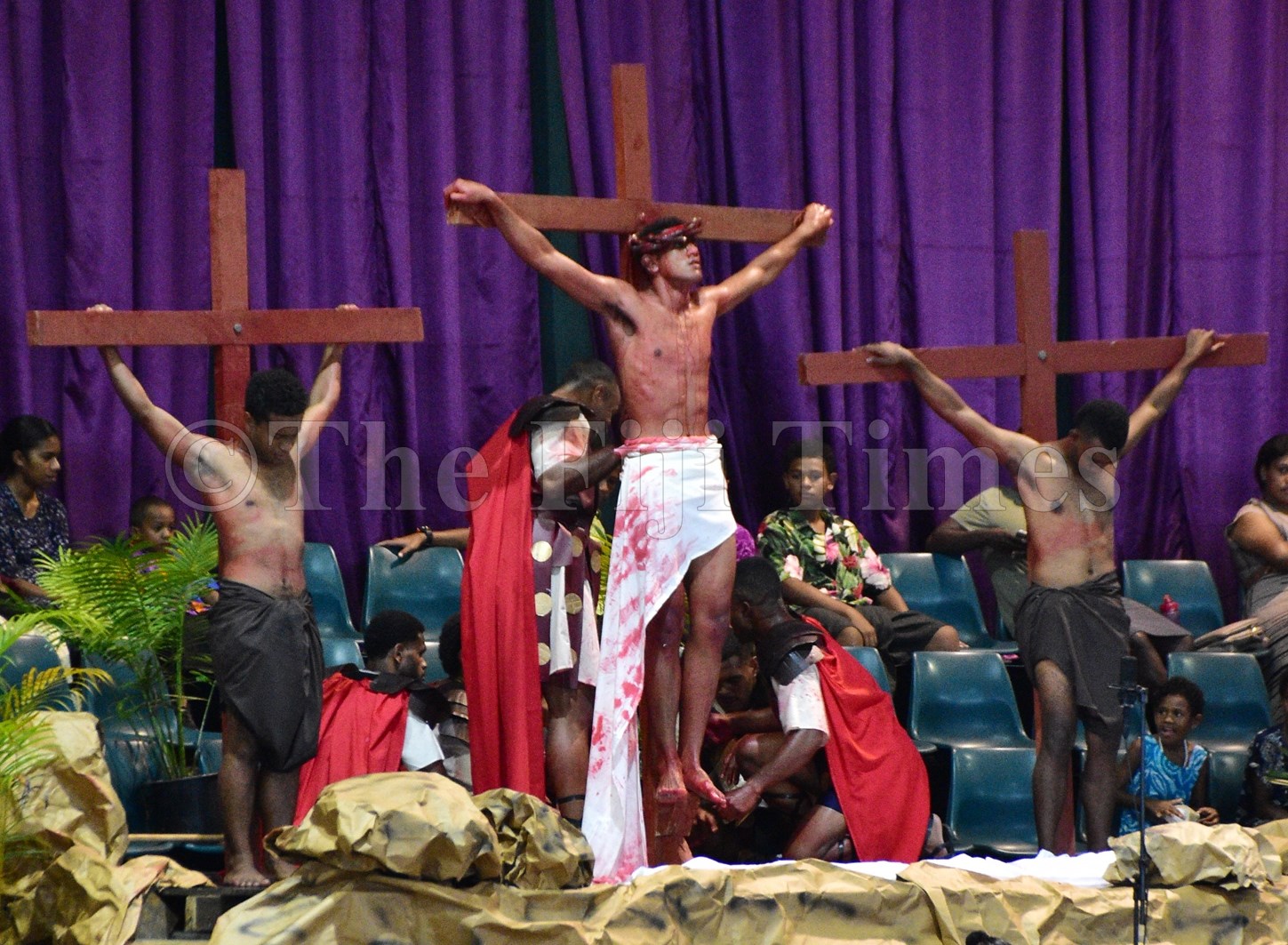 Youth members of the World Harvest Centre in Kinoya, Nasinu perform a drama on Jesus on the cross during their church service yesterday. Picture: ATU RASEA

A time to reflect

The editor-in-chief summed up the meaning of Easter in his powerful editorial titled “It’s Good Friday” (02/04). The editorial focused on the significance of Easter, the crucifixion of Jesus Christ, the importance of strengthening relationships and making sacrifices, and acknowledging the sacrifice made by Jesus Christ. Fred Wesley raised an important point about Fijians making sacrifices to make ends meet on a daily basis, and the following lines from his editorial stood out, “As we celebrate Easter, perhaps we should remind ourselves about priorities and the many challenges we face daily. “This is an opportune time to consider the plight of our fellow citizens in need.” Indeed, a timely message as we face the impact of the pandemic that has left many unemployed, shattered dreams and left Fijians in poverty. This is not only a long weekend, but it is the time we reflect on our actions and the impact they have on others. Wesley concluded with a powerful reflection, “Perhaps this is also an apt time to learn about, and maybe appreciate and understand the true meaning of Easter.” I wish my fellow Fijians a happy and blessed Easter, and I pray for a peaceful and loving Fiji! Rajnesh Ishwar Lingam Nadawa, Nasinu

People who have lost jobs should stop crying, but rise up, look for alternative employment or do something yourself to earn money. Most people are doing this. There is plenty of land and sea resources. I believe some people have become millionaires in Fiji through farming. You too can become a millionaire. Raj Kumar Vinod St, Vatuwaqa, Suva

Mr know it all

Simon thinks that there’s no other way to fix things in our midst. No other party is able to lead our country except his party (FT 27/03). He lacks thinking power and sounds like an over ambitious CEO (who doesn’t want to listen or takes advice of his team, but assumes he is Mr know it all) or a newly graduated business student who lacks experience and doesn’t understand the market! With tourism being his only exception, my question is why was the focus only on one industry? How about sugar, livestock, manufacturing, etc? Opposition has been warning of putting all the eggs in one basket. Tourism is vulnerable to natural disasters, pandemics, instability etc. What makes you think that professors, former governors, can’t lead? “Bro you seriously need to grow up and show some maturity.” You had also called for the legalising of marijuana. I am sure you won’t be around if this problem goes out of hand, would you? Have you ever weighed your opinions versus reality? Gut feelings alone has always led to very bad decisions! Maybe in your case it’s narcissisti personality disorder! Steven Chandra Suva

With the many potholes in and around Fiji, could our police officers be given horses to patrol the jurisdictions they are allocated? Horses are low maintenance and could keep them fit and trim of girth. Unfortunately my horse is roaming around the bushes in the Nausori highlands. Allen Lockington Kava Place, Lautoka

Your correspondent Amrit Singh is absolutely right in encouraging people to participate in the budget consultations and make their opinions heard. It is an essential part of the democratic process. Unfortunately, there are two problems. One is that successive governments have failed to realise that Fiji is a multilingual country, so there is no cadre of trained translators, as there is in other multilingual countries such as Belgium and Switzerland. This means that those who prefer to speak in the vernaculars are denied the opportunity to contribute their wisdom to any national debate. The second is that a large proportion of the population is unable to contribute because they do not fully understand how government works (or is supposed to work). This is not their fault, it is the fault of governments that have failed to provide even basic education in a language the people understand. It is also another compelling reason why The Fiji Times should immediately resume publication of its vernacular newspapers. They are a way to educate people on what is happening in Fiji today, and an informed population is a prerequisite of any functioning democracy. So over to you, turaga edita. Paul Geraghty USP, Suva

“Life after prison”, (FT 11/06/20) is one the best pieces of local writing I have read. It surrounds an emotional plea from a former inmate in 1959. The former inmate revealed how difficult it was for people like him to get absorbed in society after serving their sentences. More than half a century later, how has that situation changed in Fiji? I would sincerely urge The Fiji Times to publish the article on its front page this weekend. In my view, there isn’t a better time than the Easter period. It is when so much comes out related to universal values. What about the practical part? Although the writer used his hands to pen the plea and grey matter played its usual role, I think the words came from his heart and also represented those silent voices on the sidelines which we never get to hear or simply ignore. Many factors play an important role in determining successful re-entry outcomes. I think labelling and deliberately pushing former inmates out of mainstream society channels is the biggest hindrance. There are some individuals who have never seen the inside walls of correction facilities but they have gone out of their way in assisting people who have not had the best opportunities in life to get rehabilitated and become productive citizens. Recently in Fiji, a very senior member of our disciplined forces outlined the difficulties encountered by former inmates. He had highlighted some matters which unfortunately remain alien, even for the highly educated. All human lives are not the same. I do not possess the vocabulary and definitely cannot coin phrases to decorate the Yellow Ribbon program in Fiji. The Yellow Ribbon program strives to rehabilitate inmates so that they successfully rejoin communities after serving time. Everyone deserves at least a second chance in life. Herein, I am in no manner advocating for criminal activities. The 44th US president had once said, “It’s not too late”. “There are people who have gone through rough times, they’ve made mistakes, but with a little bit of help, they can get on the right path.” On a different scale, do you still remember Prisoner 46664? Mohammed Imraz Janif Natabua, Lautoka

The airline industry is facing its toughest challenge to survive. Fiji Airways can offer meals on grounded planes at a reasonable price. The restaurant with wings can also provide jobs for some off its laid off staff. Sakaraia Tubuka Christchurch, New Zealand

I always thought that our roads on Viti Levu were in a bad condition because of heavy vehicles, more vehicles and bad weather. Maybe I am wrong because the roads in Levuka are worse. With the sea on one side and steep mountains on the other side, no driver can go without hitting those big lovo pits. Luckily not much traffic in Levuka. FRA you better wake up. Narayan Reddy Levuka

As a ratepayer, I cannot wait to see the return of municipal elections in Fiji. Can the Government make a statement whether or not it is willing to call the elections as enshrined in our Constitution? By the way what stage has the reforming of the Local Government Act, which began a few years ago, reached? Is this the only reason the elections can’t be called? Suresh Chand Nadi

While Frank Lomani has proven his worth both for Fiji and the Rebels at halfback, I believe now is the time for him to take up the challenge at wing. Pranil Ram Votualevu, Nadi

The headline “More people to get jobs” was attractive on first sight but disappointing it was not about Fiji where graduates struggle to find jobs. Dan Urai Lautoka

Minister for Infrastructure, Meteorological Services, Lands and Mineral Resources says: “Roads with a lot of potholes have gone past their serviceability life span” (FT 27/03). Previously he has made the same comments about water supply infrastructure. Why did the present Government let this happen since they have been in control for many years? I believe it is about time that the said minister hands in his resignation citing that “he has gone past his serviceability and working life span”. Vinesh Prasad Vuci Rd, Nausor