Letters To the Editor 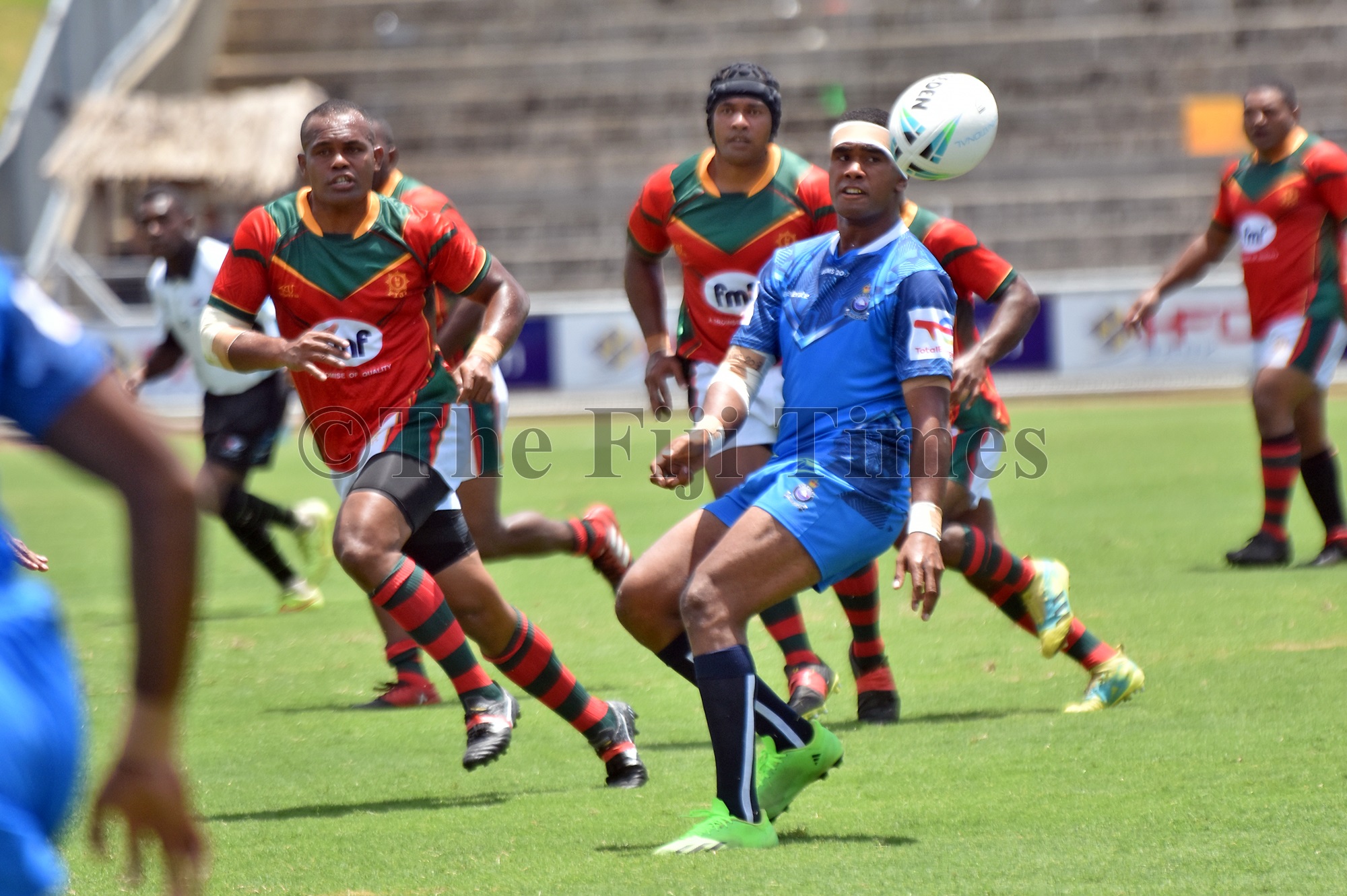 Sevanaia Galala of Police Sharks on attack against the Army Bears defence during their rugby league match of the FMF Ratu Sukuna Bowl rugby competition at the HFC Bank Stadium in Suva on Friday, November 25, 2022. Picture: JONACANI LALAKOBAU

The Police football and rugby teams sealed the deal in the 2022 FMF Ratu Sukuna Bowl clash.

I was impressed with the standard of rugby displayed by both teams, and I salute the players for playing their hearts out and for the gallant performance that made fans scream their hearts out.

Anasa Qaranivalu and Jeke Suguturaga stood out for Army, while Jack Volavola, James Brown and Terio Tamani stood out for Police with their sublime performances.

The Army and Police clash marks the end of the 15s rugby season, and I’m glad that fans enjoyed every bit of excitement from inside and outside the field.

On the other hand, congratulations to the Army women’s team for defeating Police 13-7 in the women’s rugby competition.

The new inclusion brought a new vibe to the rivalry between the disciplined forces.

Finally, thank you to The Fiji Times for the grand coverage

No To Verbal Abuse

This time of year has been dedicated to addressing issues against women, not only this year but for a number of years now.

Verbal violence needs to be understood as a serious matter.

An attack on an innocent woman’s reputation is abuse in the same way as physical rape is abuse.

It must be condemned by all right-thinking people.

ALL that political party is dwelling on during their campaign this time is highlighting and demeaning other political parties and their candidates.

They will have a go at those involved in the 1987 and 2000 coup, but they will never speak of the insurrection committed of overthrowing an elected government in 2006.

When we neglect cardinal sins, keep in mind history has it.

My predictions are as follows:

Mainly because of the iTaukei votes being split among the six parties which I believe are mainly iTaukei-based.

Sitiveni Rabuka will be in Parliament.

Biman Prasad will be in Parliament.

Mahendra Chaudhry will be in Parliament.

Viliame Gavoka will be in Parliament.

Savenaca Narube will be in Parliament.

Then again I could be wrong! All the best to the candidates.

He claims she is not fit to be the centre coordinator. Shamima has fulfilled that role very productively for 40 years in Fiji and other Pacific island countries.

This year the President of Vanuatu bestowed a medal of honour on her for her contribution to uplift women’s rights and protection in Vanuatu.

So TT is clearly clueless about how well Shamima has undertaken her role.

But his own role in attacking Shamima is understandable.

I believe he is a supporter of the FijiFirst Government which finds Shamima’s criticisms unpalatable.

But this Johnny come lately’s attack on Shamima will not deter the NGO leader from doing what she is meant to do to hold power to account.

With regard to the observation (FT 26/11/22) that prayer breaks were observed at the Wairiki 7s, please allow me to explain for the benefit of non-Catholic readers.

It has been the practice for hundreds of years for Catholics to recite the Tukutuku (Angelus) at 6am, 12 midday and 6pm.

This is a kind of prayer to commemorate the angel telling Mary that she would be the mother of God.

This tradition continues in Fiji in all koronilotu (mission stations), such as Wairiki, and some urban churches too.

It is accompanied by the ringing of a lali ni tukutuku (bell or lali), usually nine times. When this happens, all who are in the koronilotu will stop whatever they are doing to join in the prayer, or observe a respectful silence.

Tarun Tikaram is fond of criticising Rabuka and Biman from the outset (FT25/11).

Just like the critic from Down Under, Jan Nissar with his grog dopiest views on 7s rugby and Opposition political parties, both have nothing constructive to offer to the waters.

Tarun says that under FijiFirst no one is left behind.

As a matter of fact scores of Fijians are left behind and you keep harping about the distant past, whereby grass root Fijians are looking to the future.

If you are true to your words, how about you respond tp Muni Avikash Goundar of Sigatoka regarding the chemotherapy medication his sister has been waiting for two months and suffering from unbearable pain.

Suddenly, you shift your attacks toward FWCC’s Shammima Ali to tender her re4signation after seeing her at the corridors of the court house giving moral support to Biman and Richard Naidu (FT28/11).

How about for a change you attend to one of the 1113 domestic violence and 70 child rape cases that happened from January to October, 2022.

The eligible voters know that free education, water and electricity are all happening from tax payer dollars, donor agencies, development partners, loans from the World Bank, IMF, ADB and more.

Again, I say that any government that comes into power will have similar funding to move the country forward.

Fibnally, my challenge again to you and Jan Nissar to open debate on matters of national interest.

Listening to political leaders comments one is compelled to conclude change is indeed coming.

When a fuming politician dares that her leader will look after you in this life and the life after, it beats your date’s promises to grab the moon or catch a grenade for you.

But seriously, she paints an image of a political organisation with no greater priority than remaining in power.

Where does buck stops?

Constant power outages, intermittent water supply in certain areas, some roads that look like look tamani size lovo pits, nearly half the population living in poverty, a debt burden that’s growing by the day and a country where some are living in fear because of reckless statements made by irresponsible, reckless politicians.

This is not the way the world should be. So where does the buck stop?

The revival of tourism indicates that Fiji continues to be the paradise of the South Pacific despite the COVID issues.

The friendly Fijian welcome of Bula! smiles has been maintained to the comfort of the visitors to feel home away from home.

Tourism plays a huge part in our economy for the progress of our nation.

Fiji, with fascinating facilities and friendly Fijians is rated as number one of the 28 countries where tourists prefer spending their holidays.

Fiji always invites you to return.

Just wondering who is advising the current PM.

I can’t figure out whether he is attempting to win or lose in the general election.

What a sweet victory.

Both men and women in black won in their respective competitions at Prince Charles Park on Sunday.

The women took out the 2022 IDC title after defeating Labasa in the final while the boys lifted the Pacific Cup for the first time.

This is a milestone achievement for the district which takes so much pride in the game of soccer.

In the Pacific Cup the battle for supremacy was between 4-time winners and this year’s host, Nadi and Ba, and as we now know Ba won it by 1-0.

There was a slight rainfall before the kickoff of the final, but I think it did not matter much as the ground still was in playable condition.

According to FBC soccer commentator, Raymond Stoddart, about two and half to three thousand people were in attendance during the finals.

Interestingly no overseas teams had qualified to play in the finals.

This means our talents are doing good.

Before I conclude I wish to congratulate both the winning teams as well as their supporters for remaining calm when the ship wasn’t sailing smoothly. Enjoy your spoils, see you next time.

Congratulations to both the men’s and women’s soccer teams for the sweet victory over the weekend.

You have once again brought glory to the soccer crazy town of Ba.

The All-in-one Builders Ba FC defeated the RC Manubhai/Esy Kool Nadi FC at the Prince Charles Park in Nadi in the finals of the Pacific Community Cup 2022.

This tournament was proudly sponsored by the All-in-one Cakes & Restaurant. Ba defeated the Jetsetters by 1-0 for the first time. The winning goal was scored by Nabil Begg in the 18th minute of the match.

In the Digicel Women’s IDC 2022 finals, also played at the Prince Charles Park on Sunday, the Ba Women’s FC thrashed their opponents Labasa FC by 4-2.

Surprisingly, all the six goals were scored in the second half of the game as both teams went into the breather scoreless.

Hearty thanks to all the players, coaches, team managers, technical officers and the well-wishers of the two victorious teams. Ba toh Ba hai!

that we need to have a good mindset.

But what should be our mind set on ? that’s the question,

which one really needs to ponder on.

Coz there are bad and negative mindsets, apart from the good ones.

Your mind need to be set on,

and not one that’s wrong!

There is a lot of badmouthing going on between our political leaders, which is not a positive sign of moral of livings for our young generation, to read or hear via the media.

Tarun Tikaram of Lami seems to inherit that behaviour overnight by calling Shamima Ali to tender her resignation from FWCC and be the campaign co-ordinator for PA/NFP as in your F/T 28/11 (Pg9).

What right do you have to tell Ms Ali which political party she should choose or not to choose?

It’s her right to choose just like any Fijian?

Ms Ali doesn’t need to be a campaign co-ordinator of PA/NFP, because her experience and work qualities qualifies her to be a party leader of her own party and even as a female prime minister of Fiji.

Why don’t you approach her directly and tell her in her face rather than gossiping about her in your letter?

I believe she isn’t the only expressing her disappointment over our current government leaders.

Majority of Fijians, I believe, do, including me and other writers!

Social media and mainstream media should be your benchmark?

I believe change is inevitable!