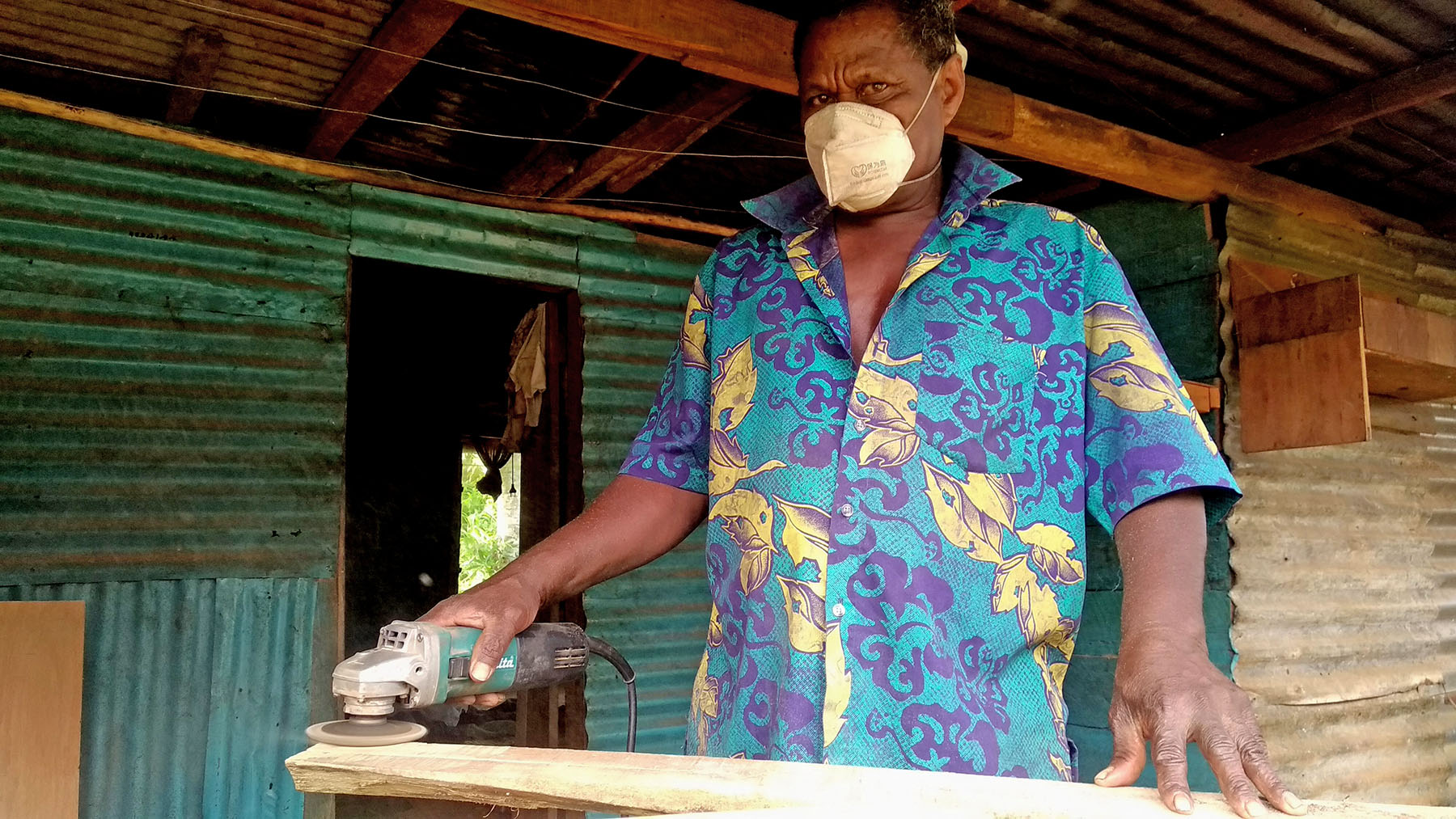 Never too late to learn

WHILE many his age are staring down a death certificate, 62-year-old Ilaisa Lomadroka took to the classroom after dropping out of primary school education 47 years ago, to earn himself a Trade Certificate in Joinery from the Dreketi Central College in Macuata (FT 02/11).

What an inspiration for elderly folks over 50 who feel that their time and use is over!

Mr Lomadroka has proven to us that age is just a number and it’s never too late to learn.

Not only has Mr Lomadroka triumphed against his peers but also against the fast and furious.

YET another calamity has struck India, another life taken by a plague born of malignancy and sick-minded human beings.

Rape is no longer a myth or a topic of bewilderment as this horrific act is now daily news.

Even our children fall into the clutches of eerie pedophiles who cowardly prey on vulnerability.

As rape spreads its tentacles to destroy lives, the societal blame-game profoundly intensifies as people are so engrossed in finding ways to somehow hold the victim accountable for bringing this disaster upon them.

I believe absurdly blaming the length of clothing or the character of the girl are weaknesses of the society that rapists feed of and grow into vicious monsters.

There is simply no excuse for rape.

No girl wants to be raped and they have the right to wear whatever they are comfortable in without the fear of sexual perpetrators lurking at their heels.

There are so many rape cases that go unnoticed with marital rape being at the pinnacle of this.

Sick are those men who commit this sin within the holy boundaries of marriage and worse are those who can help the victim but choose to turn a blind eye.

Talking about rape  at home should not be a taboo as our children need to be aware of the grave danger that surrounds them and they must know why rape is wrong because this might stop a future offender.

Practise what you preach

IT seems that the word of God is not working in the lives of some people who profess to be Christians.

Looking around, I see places of worship peppered all over Fiji.

And now some religions are using loudspeakers (which they did not do previously) to get the word out, or in my view, shove it down the throats of people who do not want to listen to it.

I believe it shatters the peace and tranquility of people having a quiet time in their homes.

Especially in the mornings and then you have the outside broadcast where denominations turn up at parks, set up and blast away on loud speakers.

I believe the word of God preached from the pulpit should be enough to get to people’s hearts and minds to live good, godly lives.

It seems it isn’t working.

The churches have now turned and blamed kava, alcohol and nightclubs in their desire to get things right.

May I humbly ask if they see these things as evil as the devil?

If they agree, I believe they (church) should make amends to how they profess the faith.

Because it seems Beelzebubs hold on humans is growing.

One advice is, if you are going to tell someone that he should not do what has been mentioned because it was not good, then the person should have already been practising what he is telling his flock.

This is just my humble opinion.

You have been cautioned

I BELIEVE the Nadi Town Council must be effectively conserving energy from the men’s toilets in stage one of the recently-completed Namaka market.

The men’s toilets are kept in semi darkness except for the “filtering in of sunlight” by partly jamming the main door with a broken concrete block.

You will be “comfortably seated” in pitch darkness.

Two hand basin taps remain loose at their bases, they could break off any day soon, unless fixed.

THE Babasiga Lions were on the verge of kissing the 2019 Pacific Cup goodbye had NZFFI beaten Northshore, but hats off to Northshore for not giving up easily and handing the northerners a lifeline.

The Lions pulled off another shocker upsetting an unbeaten Sydney side (1-0) in extra time thanks to Siotame Kubu.

It was also the first time that three Fiji teams qualified for the semis.

MANY names have been given to the “government assistance” schemes such as giveaways and freebies.

In the instance of “free education”, it was cleared by the Education Minister.

It is actually a gift.

I heard of another one, handout.

This came from the Agriculture Minister.

Serious, what is it?

They address a political system that unifies while identifying existence of various cultures.

IT may sound hilarious but my Christmas wish is for LTA and the police force to stop giving hefty infringement fines to cab drivers for the month of December.

Why not put all your resources to catch speeding and people drink-driving this month and let cab drivers make a decent and honest income to enjoy with their families.

A SYSTEM is corrupt when it is strictly profit-driven, not driven to serve the best interests of its people.

MY heartiest congratulations to the Lautoka team for successfully defending their Pacific Cup title in New Zealand.

In their semi-final clash against Nadi, the Sugar City boys came out the clear victors.

The Jetsetters were beaten 3-1.

The other semi-final was won by Labasa.

In the final both the finalists played a competitive game of soccer and when the final whistle was blown, it was Lautoka that stood tall.

It was just a goal difference that gave Lautoka the advantage and the 2019 cup.

Lautoka’s success is attributable to the good understanding and co-ordination that the players have between them and managerial excellence.

It is a very good gift to the people of the Sugar City before Christmas.

Again, I congratulate them on their achievement and wish them good luck in future.

WE live in a residential area where there is a nightclub.

I believe the nightclub’s permitted daily operating hours are from 5pm to 1am under Section 30 (7) of the 2009 Business and Liquor Hours Act.

Unfortunately, it does not close at 1am but runs until three, four or five o’clock in the morning and lately, 10am in the morning.

I believe this is a breach of licence.

The nightclub is supposed to be soundproof, it is not so, the noise of the music and patrons partying travels and keeps us and our neighbours awake at night.

The decibels from our property are over 85.

They are supposed to be fewer than 85 decibels.

It also sells liquor to intoxicated people who are seen vomiting and urinating either on the property or neighbouring properties such as ours or the beach.

Apart from the noise pollution, there are alcohol bottles (some broken), cans and boxes littered over neighbouring properties and the beach where the tourists like to walk.

We also live in a tourism area and when the patrons roll out after spending all their money, they try to stop tourists, taxis and private cars by jumping on their bonnets, kicking their cars so they can get a free lift home.

This must be terrifying for them.

There is constant fighting after the nightclub closes, screaming and partying until sometimes 11am the following day.

Some days we can’t leave our property because there are drunkards still drinking near our gate.

We are too scared to approach them and this is a serious safety issue for us, neighbours and tourists.

We have had patrons come up on to our property and threaten us and neighbouring homes have been broken into.

This does not make us feel safe having this nightclub in a residential area.

These people can hardly walk, they are so intoxicated, disorderly and out of control and drinking alcohol in a public place such as the beach which I believe is illegal.

I believe they are also sold alcohol after hours.

We have been to government agencies, police, divisional commissioner and Divisional Liquor Licensing Board.

The Divisional Liquor Licensing Board, I believe, meets four or five times a year to grant and reissue liquor licences for our division.

I believe they have not met for over three years, therefore all liquor licences are renewed despite objections.

This nightclub is supposed to comply with health, OHS and other matters to the safety and security of the neighbourhood.

I believe it certainly does not!