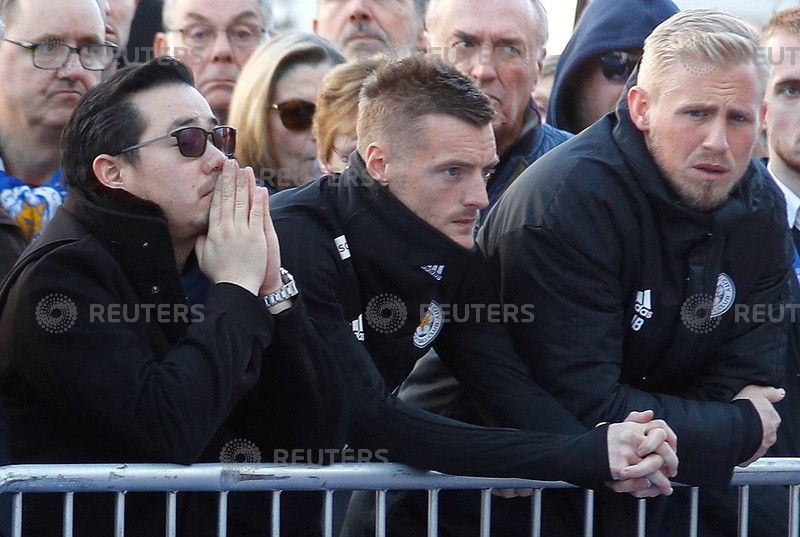 Khun Aiyawatt Srivaddhanaprabha, son of Leicester City's owner Thai businessman Vichai Srivaddhanaprabha, Jamie Vardy and Kasper Schmeichel look at tributes left for Vichai and four other people who died when the helicopter they were travelling in crashed as it left the ground after the match on Saturday, in Leicester, Britain, October 29, 2018. REUTERS/Peter Nicholls

LONDON (Reuters) – Striker Jamie Vardy and his Leicester City team mates will travel to Thailand for the funeral of owner Vichai Srivaddhanaprabha after Saturday’s Premier League match against Cardiff City.

The 60-year-old billionaire died last Saturday with four others when his helicopter crashed next to Leicester’s King Power Stadium.

The funeral, likely to last a week, starts on Saturday in Bangkok.

Former England international Vardy told Sky Sports television on Friday that he and the other players had to be there.

“That’s how we are — we are a close-knit group. We are one big family and one of the main reasons for that is Vichai,” he said. “For us to be there is massively important.”

Vichai bought Leicester in 2010 and the team went on to stun the soccer world by winning the Premier League title against the odds in 2016.

Vardy said the last week had been the hardest of his life but the players, who will travel by road to Cardiff, were keen to play on Saturday.

“We all spoke about wanting to play,” said Vardy. “It’s what Vichai would have wanted and that’s we are going to do.

“We know what we have to do and we need to go out and honour his name and put in a performance which will hopefully get the win.

“It is going to be tough and it will be very emotional, but we’ve all chatted about it. People are saying the result doesn’t matter, but for us lads we want to make it a positive result.”

Leicester are 12th in the table on 13 points, while promoted Cardiff are 17th with five points from 10 games.

Cardiff City fans are planning to unveil a giant flag with the Thai emblem at the match.