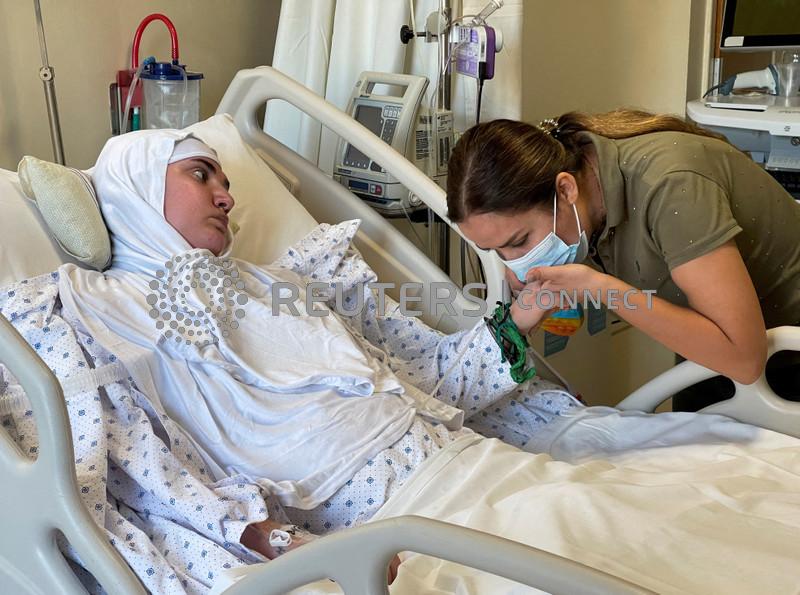 (Reuters) – Lebanese mother Liliane Cheaito, stuck in the hospital since the Beirut blast two years ago, saw her son for the first time on Thursday following a court ruling in a protracted family dispute with her husband.

Cheaito has not left the American University of Beirut’s Medical Center since August 4, 2020, when she was brought in bruised and bleeding after the enormous explosion at Beirut’s port, which was caused by improperly stored chemicals.

She sustained severe damage to her frontal brain cortex that left her mostly paralyzed and unable to speak.

Two of her four sisters told Reuters that her husband, Hassan Ali Hodroj, had barred her from seeing their son Ali, now two years old, during her stay in the hospital. Liliane’s family in 2020 filed a complaint with Shi’ite religious authorities seeking to compel Hodroj to allow the child to visit his injured mother.

Iqbal Cheaieb, a lawyer for Hodroj, said the father had kept Ali from the hospital because he was “scared” to let the boy see his mother in such a state. The couple remain married.

On Thursday, Ali visited Liliane at the hospital for the first time following an order by a Shi’ite court in Lebanon, where personal affairs including custody of children are determined by tribunals pertaining to the individual’s sect.

Qabalan is the top Shi’ite cleric in Lebanon.

A photo shared by the family showed Liliane in her hospital bed, extending her left hand to a curly-haired boy in a black shirt that the family identified as two-year-old Ali.

“She didn’t take her eyes off of him for one second,” Nawal told Reuters, saying she hoped the visits would boost Liliane’s morale and speed up her recovery.

In July, Liliane uttered her first word in nearly two years – “mama” – understood by her siblings to be a cry for Ali.

Her sisters had earlier told Reuters that Liliane represented the “agony” of Lebanon’s multiple crises: the devastating blast and its aftermath for grieving families, and the daily struggle of many citizens to survive as the country’s economy has crumbled.