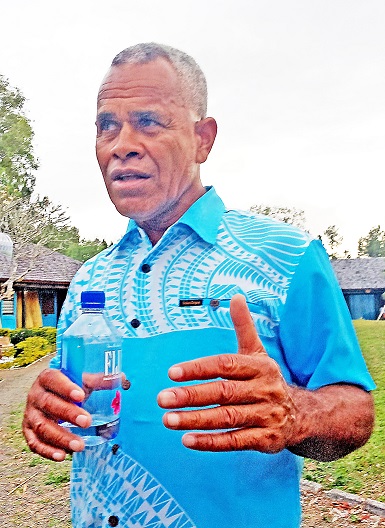 GROWING up in his village in Yasawa-i-Rara, Ratu Asaeli Vatanitawake was very close to his father.

Under the guidance of his father, Ratu Asaeli was taught his traditional roles and responsibilities.

He learnt everything that is to deal with in regards to the leadership role of the chiefly title of Tui Yasawa.

He was well grounded to serve the vanua and to assist in the ruling and governing of his tribal people of the yavusa o Rara.

If should come the time for him to assume the chiefly title, Ratu Asaeli said he knew he had been equipped to fulfil the duties needed.

Life has its way of teaching us and sometimes it’s often the hard way. Things took a twist at the back end of 1973 when he was still a 17-year-old teenager.

After dropping out of education from the Navuso Agricultural School, Ratu Asaeli got mixed up in the wrong crowd and four years after leaving school he found himself on the wrong side of the law that landed him twice behind bars.

“When I came out, I told myself, I am not going back, so I headed straight to the village,” he added.

While he regretted the time spent confined within the walls of the Natabua and Naboro Corrections facilities, Ratu Asaeli said it was a learning experience.

“That was a complete waste of time, but it has taught me the importance of valuing who I am and time management.

“First thing I did was I promised myself I will not consume alcohol, grog neither smoke and that is something I have done since returning to my village and starting my family in 1984,” he said.

Ratu Asaeli, who is the younger brother of the Tui Yaswa, was appointed by the vanua to be one of 40 participants from the province of Ba to undergo a 14 weeks Traditional Leadership Curriculum (TLC) training workshop.

“Facilitated by the iTaukei Affairs Board and funded by the iTaukei Trust Fund Board (TTFB) the training of chiefs is done so with the hope that they will one day become real agents of prosperity upon their vanua through good leadership, wise decision-making, and prudent management of their natural resources for the purpose of not only protecting the environment but also sustaining it for future generations.

“For a vanua to truly prosper, it is paramount that the leadership is well-equipped to be able to thrive in the new environment it is exposed to but at the same time remain true to the core values of the Fijian communal way of life,” said TTFB chief executive officer Isoa Kaloumaira.

“When I was first told of this training I was reluctant to attend because I know for us the indigenous, there is no formal education about our cultural identity and traditional responsibilities. All of this have been taught at home.

“But then I thought to myself, education is change so I agreed to come to be part of this training. I must say it was the right choice. I strongly feel the quality and level of respect of the iTaukei values have dropped.

“In my village, I have seen a lot of changes, things that should not be done, are now done. People have forgotten their roles and responsibilities this has been the cause of a lot of social problems.

“This training lays a good platform and refines what we already know and what we need to know, so when we leave from here we will help resurrect that which was lost and set everything right.

“I am a member of the chiefly household, and I believe the vanua will only prosper if the leadership takes the lead example by doing right,” added Ratu Asaeli.

He said everything begins at home.

“My youngest daughter is still in school and every now and then I will always be telling her how to behave, what to wear and this is what. “I have also done to the three older ones, my only son knows his duty and responsibilities.”

The first TLC training was conducted to young chiefs from the Rewa and Tailevu province earlier this year.

The second TLC training which started this week will be completed in December.