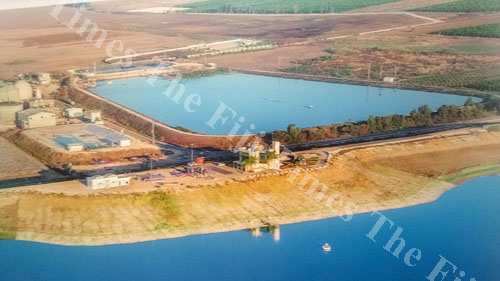 More than 80 per cent of water in Israel is reused. Picture: SIKELI QOUNADOVU

IN biblical context when Abraham and Lot agreed to go their separate ways, Abraham gave the choice to his nephew to choose which place he would want to occupy.

Their separation was the result of continuing quarrels and tension among their shepherds.

Taking in consideration the land they had before them, Lot looked around and saw the whole plain of the Jordan was rich and fertile so he chose to go that way while Abraham decided to take the other route, to the land of Canaan. A barren land as seen by the naked eye with nothing much to gain from.

“The Lord said to Abraham after Lot had parted from him, “Look around from where you are, to the north and south, to the east and west. All the land that you see I will give to you and your offspring forever. I will make your offspring like the dust of the earth, so that if anyone could count the dust, then your offspring could be counted. Go, walk through the length and breadth of the land, for I am giving it to you. “So Abram went to live near the great trees of Mamre at Hebron, where he pitched his tents. There he built an altar to the Lord.”

(Genesis 13:14-18 NIV Holy Bible) When the Israelites fled from Egypt after centuries of captivity they journeyed back to their Promise Land, where they could live in a land flowing with milk and honey. This land, known as Canaan in ancient times, is roughly located in the same place as modern-day Israel.

In addition history tells Israel had come under the rule of several foreign rulers from the Babylonians under King Nebuchadnezzar in 600BC to the Romans in AD70.

Roman rule was followed by centuries of domination by successive foreign powers; Byzantine, Arab, Crusaders, Mamluk, Ottoman and the British. Israel was finally reborn and declared a state in 1948; the first since the fall of Masada in AD70 and official declaration that Israel be returned to the Israelites.

Yet for a country that has suffered so many persecutions, apart from being uprooted from their land, taken as slaves and then returning centuries later.

For a country that had about 70 per cent of its population killed during the Holocaust (more than six million).

For a country that continues to protect its borders every second of every minute of every hour of every day, week in and week out, because of a movement to wipe them off the map.

From a barren desert with no minerals, nor oil, gold, diamonds or bauxite and to actually start from scratch, Israel has come a long way. With gross domestic product per capita at $US41,000 ($F85,654), Israel has a stronger economy than the United Arab Emirates that produces more than two billion barrels of oil with a GDP per capita of $US30,000 ($F62,673).

Despite all it has gone through — Israel still speaks the same language (Hebrew), follow the same religion, maintains its cultural and traditional identity and practises the same faith as was done by their forefathers 4000 years ago.

Today, it prides itself of being ranked number one in the world for innovative capacity and first in the world for entrepreneurship. Israel’s creative, skilled, and ambitious workforce is one of the most obvious reasons leading executives turn to Israel to do business.

Israel has to lot to offer us in regards to agriculture.

Israel’s booming agriculture sector is so advanced that it is even exporting fruits and vegetables to Asian and European countries.

“We can produce so much and so many tomatoes and cucumbers. Why? Because everything is computerised. You have a drone in the air that can see a plant and determine what it needs, how much water, fertiliser and so on. This is one of the innovations, because we don’t have much water but we do use the agriculture and high-tech technology companies to improve the yield and conserving water and fertiliser,” said Paul Israel
the executive director for Israel-Australia, New Zealand and Oceania Chamber of Commerce.

In addition Israel has an innovative way to boost the dairy industry.

“Look at the production of milk by Israel’s cows; it is number one in the world. Israel’s cows produce 11000 litres per year and at 40 litres per day. And this is something we have computerised, when she eats, sleeps, how it’s fed, this is what we want to share with the world,” said Mr
Israel.

In addition, about 90 per cent of its water is reused to meet the demand of seven million people. Further to this, all waste water is treated and used to irrigate farms.

An article published by CNBC states: “in agritech, over 25 companies manufacture seeds and other innovative solutions in Israel, including irrigation — more than three million acres of farmland in the US use cutting-edge methods and equipment manufactured by Israel’s Netafi m.”
With increase in cyber-crimes, Israel is a powerhouse when it comes to cybersecurity.

“We have 500 tech companies, 250 research groups, so many entrepreneurs these are some of the companies that Israel has.

“This is one of the biggest hubs of technologies in the world for innovation, look at the companies that are having their R&D centres in Israel,” said Mr Israel.

Former US president Barack Obama remarked that “If people want to see the future of the world economy they should look at Tel Aviv, home to hundreds of startups and research centres.

He added with the wealth of knowledge they have they want to share with the rest of the world, especially with us in the Pacific.

“What is good about our relations is that Pacific islands are not afraid to stand with us. We are hoping to extend our relationship and friendship with other countries and other regions in the world, even the Muslim countries.

He added despite the constant threat from countries around it and Muslim radicals, Israel stands firm in its efforts to restoring humanity and saving lives.

According to one of their polls, Muslims in Arab nations have agreed there needs to be a relationship with Israel, “Forty per cent of people in Sudan agree, another 48 per cent in Iraq also.

“What we are trying to say is we are not your enemy, we are your friends we want to share with you our knowledge, our experience. So this is the way Israel wants to show its friendship to the people. “Due to the conflict with Syria, Israel is treating wounded Syrian civilians in the Golan Heights. My son is one of the paramedics, he gets home and talks about how they treat young boys aged 10 or 12 after moving them from the border, and brought to hospital.

“They tell us we have been educated that Israel is the devil, and when we come here and we see your generosity and hospitality and the treatment we are given by Israeli doctors, nurses it is absolutely the opposite. You are the angels who save our lives and these are civilians of countries
whose leaders have said that Israel needs to be wiped off the map.

“We are doing it also with Gaza. Palestinian from Gaza, the leader of Hamas is saying Israel should be wiped out from the map of the world, that the Jews have no right to live in this country. It’s our country, it’s our land and they should be out of it, whether be to Europe or out at sea.
“But in spite of this, we are sending between 500-1000 trucks of food supplies to them. We continue and willing to help people.”

One often asks why is it then Israel, which is often at conflict, continues to be willing to help others. It is simply because the Israel Government and people do not want any other country to go through what they had gone through.

A country that had to dig deep in order to find its source of income, utilising the minds of its own people, Israel survived many foreign rulers, it survived the Holocaust and today is a shining example of resilience and perseverance.

“I want to live here to work here and we are willing to help people so that the world will know and acknowledge our right that we have a right to live here. We have so many security issues, protecting boarders and farmers.

“We share our abilities and our knowledge and Masada is a symbol that we are not going anywhere,” added Mr Israel.

 Next week, we take you on a tour to visit famous holy sites in Jerusalem.