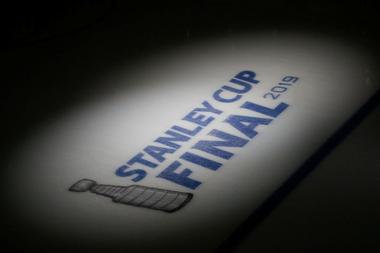 FILE PHOTO: May 29, 2019; Boston, MA, USA; A general view of the Stanley Cup logo before a game between the Boston Bruins and the St. Louis Blues in game two of the 2019 Stanley Cup Final at TD Garden. Mandatory Credit: Greg M. Cooper-USA TODAY Sports

(Reuters) – National Hockey League players can opt to return to their homes, even if that means leaving North America, but should self-quarantine once they get there until March 27, the league said in a statement on Monday.

The NHL, which last week joined other leagues around the world in suspending its season in light of the coronavirus pandemic, said players should still immediately report any symptoms or testing results to club medical staff.

The league added that at the end of the self-quarantine period, and “depending on world developments,” consideration will be given to allowing the opening of club facilities to limited practices.

The announcement comes after the Centers for Disease Control on Sunday recommended cancelling events with 50 or more people for the next eight weeks throughout the United States.

The NHL has 24 teams in the U.S. and seven in Canada, and the league’s original schedule had the Stanley Cup Final ending in mid-June.

Only twice before has the Stanley Cup not been awarded — in 1919 because of the Spanish flu and in 2005 when the season was called off due to a lockout.