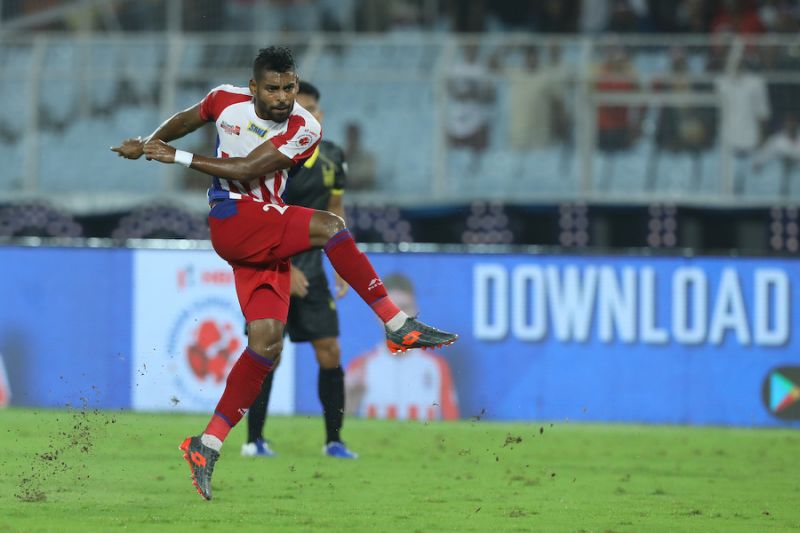 Roy Krishna in action for ATK in the Indian Super League. Picture: ISL/SUPPLIED.

It’s hard to get over the fact that Fijian wonder boy Roy Krishna is making headlines in the Indian Super League.

Having joined the ATK club this season, the former Labasa man won the Hero of the Month award for November, this week.

The ace striker has been in impressive form in the ISL.

In the final match of November against Mumbai City FC, Krishna scored a late goal in injury time to rescue a point for his team.

He is an equal top goal scorer of the competition with four goals and has also won the captaincy band of the Kolkata-based team.

Fiji Football Association president Rajesh Patel, congratulating Krishna for the achievement, remarked it was “a great achievement for him personally, his family and every Fijian football fan”.

Krishna, he said, had set a benchmark for other players in the country to strive for the best.

In rugby union, this week, Rugby Australia announced the signing by the Reds of Melbourne Storm premiership-winning winger Suliasi Vunivalu on a two-year contract from 2021.

The Fiji-born winger will switch back to the code he played as a schoolboy in New Zealand.

He links up with the Queensland Reds in Brisbane for the 2021 and 2022 Super Rugby seasons.

Vunivalu has scored 72 tries in 94 appearances with the Storm.

Born in Suva, he moved from Fiji to New Zealand at 16. Now at 24, Vunivalu is one of rugby league’s feared finishers, topping the NRL’s try-scoring list in his first two seasons and starting in three consecutive grand finals from 2016 to 2018.

Meanwhile, the New Zealand All Blacks were largely snubbed in a team of the year named by respected British magazine Rugby World.

Forwards Joe Moody and Ardie Savea were the only New Zealand players selected, with Savea placed out of position at No 8. The Springboks provide four players — Faf de Klerk, wing Cheslin Kolbe, centre Lukhanyo Am and flanker Pieter-Steph du Toit.

Flying Fijian Semi Radradra was named as one of the wingers.

Radradra, now playing in the French competition, recently made international headlines when he was picked up by Bristol for a lucrative sum.

All these players have one thing in common.

They were all born and grew up in Fiji before making a name for themselves internationally. They should be role models for up-coming youngsters looking to chart a path in sports.

They stand out as perfect examples of what Fijians can achieve given proper training, with top class resources, and support systems in place.

The onus is on the governing bodies in Fiji to raise standards to allow our talented youngsters to live their dreams.

Individually though, our players must live up to expectations, and rise to the challenges before them.

Radradra, Krishna and Vunivalu are just three examples of what can be achieved with hard work.