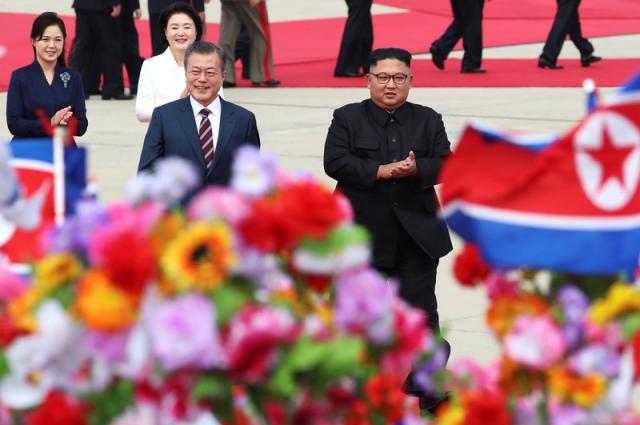 SEOUL (Reuters) – North Korean’s Kim Jong Un greeted Moon Jae-in with hugs and smiles on Tuesday as the South Korean president arrived in Pyongyang to discuss faltering talks on denuclearization and the prospect of officially ending the Korean War.

Underscoring the challenges ahead, North Korea’s official Rodong Sinmun said on Tuesday “the responsibility falls squarely on the United States” for the stalled nuclear discussions.

“It is due to its nonsensical, irrational stubbornness that other issues can only be discussed after our country has completely verifiably, irreversibly dismantled our nuclear capabilities… without showing the intention to build trust including declaring the end of war,” the newspaper said in an editorial.

Moon, himself the offspring of a family displaced by the war, has met Kim twice this year at the border village of Panmunjom.

As he landed at Pyongyang’s Sunan International Airport on Tuesday morning, Moon was greeted by Kim, his wife Ri Sol Ju and other top North Korean officials, as well s a large honor guard and a military band.

Kim Yo Jong, the younger sister of the leader and a key propaganda official, was seen preparing officials for Moon’s arrival and accompanying Kim Jong Un and his wife.

On Wednesday, Moon and Kim plan to hold a second round of officials talks after which they are expected to unveil a joint statement, and a separate military pact designed to defuse tensions and prevent armed clashes. Moon will return home early Thursday.

This week’s summit comes as the United States presses other countries to strictly observe U.N. sanctions aimed at choking off funding for Pyongyang’s nuclear and ballistic missile programs.

North Korea says it has destroyed its main nuclear and missile engine test site, and has halted atomic and ballistic missile tests but U.S. officials and analysts believe it is continuing to work on its weapons plans covertly.

U.S. Ambassador to the United Nations Nikki Haley accused Russia on Monday of “cheating” on U.N. sanctions on North Korea.

Moon is hoping to engineer a proposal that combines a framework for the North’s denuclearization and a joint declaration ending the Korean War, Seoul officials said.

The conflict ended with an armistice, not a peace treaty, leaving U.S.-led U.N. forces including South Korea technically still at war with the North.

But U.S. officials remain “unenthusiastic” about declaring an end to the war without any substantial action toward denuclearization from the North, Seoul officials said.

South Korea is pinning high hopes on Kim’s remarks to Moon’s special envoys earlier this month that he wants to achieve denuclearization within Trump’s first term in office ending in early 2021.

Agreeing on a timetable is a core task for Moon, as it would induce U.S. action, said Lee Jung-chul, a professor at Soongsil University in Seoul.

“Given U.S. scepticism that South Korea may have oversold Kim’s willingness to denuclearize, how President Moon delivers his sincerity toward denuclearization to Trump would be a key factor for the fate of their second summit,” Lee told a forum on Monday in Seoul.