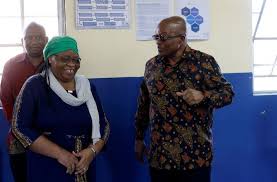 JOHANNESBURG (Reuters) – Jacob Zuma’s lawyers argued on Monday that the former South African president had been treated unfairly by prosecutors in his attempt to have revived corruption charges set aside because he is unpopular in the country at large.

Zuma, who was in office from 2009-2018, has applied for a permanent stay of prosecution from 16 charges of fraud, racketeering and money laundering relating to a deal to buy 30 billion rand of European military hardware for South Africa’s armed forces in the late 1990s.

The 77-year old, appearing in court on Monday for the fifth time since the charges were reinstated in March 2018, has previously denied any wrongdoing and has said he is the victim of a politically motivated witch-hunt.

On the first day of the hearing, Zuma’s lawyer, Advocate Muzi Sikhakhane, described the former president’s treatment by the National Prosecuting Authority (NPA) as “mob justice” and said Zuma had been charged because the country does not like him.

“Suppose we know that he may well have done what we suspect he did. Does he get stripped of human dignity, is there a reason to deal with him in a particular way because he is Mr Zuma?” Sikhakhane said in his opening comments.

He accused prosecutors of being biased against Zuma, who was ousted by the ruling African National Congress (ANC) in February 2018 after nine years in power marked by graft allegations and economic stagnation that led to credit rating downgrades.

His other lawyer, Thabani Masuku, said the application was not an attack on the NPA, but a defense of Zuma’s rights.

“They themselves (NPA) in their own words, from their own mouths, (said they) were wrong in the way they’ve dealt with the Zuma prosecution,” Masuku told the court, citing the NPA’s affidavits.

The defense and the state agreed on Monday morning to postpone the case against Zuma and co-accused French arms company Thales, setting Oct. 15 as a holding date pending judgment on the application for a permanent stay of prosecution.

Zuma’s lawyers also argued that there have been unreasonable delays to Zuma’s case that could lead to him not receiving a fair trial.

In a statement on Sunday, Thales expressed a similar view, saying it believed “it cannot obtain a fair trial” because of the very long delay of the case, together with a range of factors beyond its control.

Thales reiterated that it has no knowledge of any transgressions having been committed by any of its employees in relation to the awarding of the contract in the 1999 Arms Deal.

Zuma later addressed hundreds of his supporters in the city of Pietermaritzburg, saying the case should not continue because it is old and those who were part of the prosecuting team, witnesses and judges have either retired, forgotten the events of 20 years ago, or died.

“Also, the rights of Zuma have been greatly undermined and we have evidence to prove that,” he told the crowd of people wearing ANC t-shirts and army jumpsuits.

Zuma led the crowd in his famous rendition of “Umshini wami”, made popular by the ANC’s armed wing during South Africa’s decades-long struggle against apartheid and which translates as “Bring my machine gun”.

The charges against Zuma were originally filed more than a decade ago but the NPA set them aside shortly before he successfully ran for president in 2009.

After his election, his opponents fought a lengthy legal battle to have the charges reinstated.

The case is a rare example of a judicial system seeking to hold an African leader to account for his actions.

Zuma, wearing a black suit and red tie, was subdued in court. His son Duduzane, who faces culpable homicide charges in a different case, and a few of his supporters including a former cabinet minister and ANC politicians traveled to Pietermaritzburg to support their former patron.