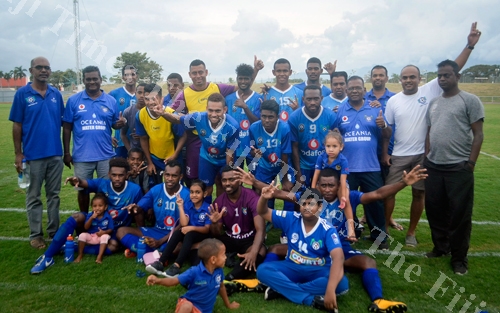 Members of the Lautoka soccer side at Churchill Park in Lautoka. Picture: BALJEET SINGH

LAUTOKA Blues have set their focus on the coming Pillay Garments Champion Versus Champion battle against arch rival Ba.

After retaining the Vodafone Premier League and the Courts Inter District Championship trophies, the Blues will be gunning for another piece of victory during the CVC.

The side resumes training today. Team manager Paul Abraham says the next target for the team is to win the CVC.

Abraham said all the players who featured at the IDC victory would be available for the team.

“Our next target is to win the CVC,” he said.

“We know it will not be an easy challenge and we are looking forward to the challenge. “Ba is always tough to beat and they have some talented players.”

He said Ba would be out to avenge its IDC loss in Suva last week.

He said the win would be a good platform for the Pacific Cup and the O’League championship Top players to watch for the Blues are former Ba rep Samuela Nabenia who scored the winning goal in the IDC final, Benjamin Totori, Samuela Drudru, Jone Vesikula, Zibraz Sahib, Dave Radregai, Kavaia Rawaqa and Beniamino Mateinaqara.

The first round of the CVC will be held at Lautoka’s Churchill Park on October 28.