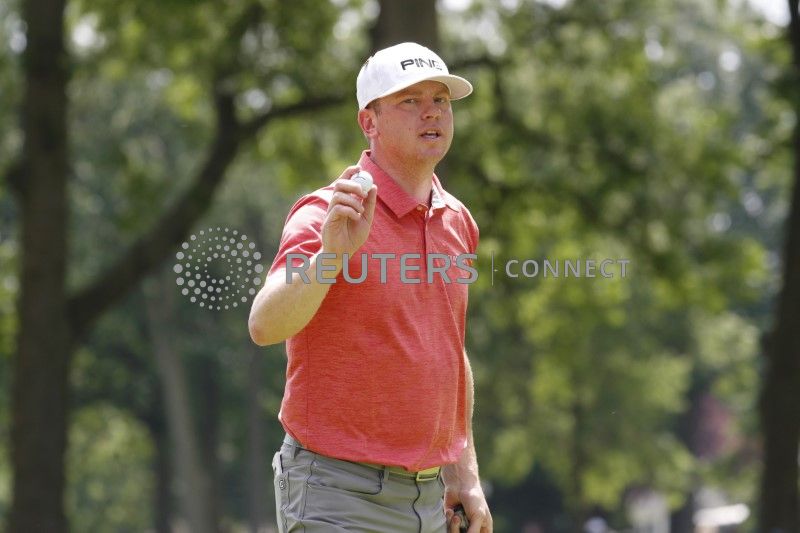 (Reuters) – Nate Lashley galloped to a six-stroke third round lead at the Rocket Mortgage Classic in Detroit on Saturday after carding his second nine-under-par 63 of the tournament.

The 36-year-old, whose career finally seems ready to blossom after a family tragedy and early struggles as a professional saw him almost walk away from golf completely, leads on 23-under 193 ahead of J.T. Poston (66).

Cameron Tringale moved into a third place with a 65 that left him seven adrift.

Lashley’s parents and girlfriend were killed 15 years ago in a light plane crash while flying home to Nebraska after watching him play in a collegiate tournament.

He then struggled in his first few years after turning pro and briefly quit the game in 2012 to sell real estate but is now on the brink of his maiden PGA Tour win in his second season on the Tour.

Lashley says it was hard to play in a positive frame of mind for several years after the accident and acknowledged that his parents and girlfriend were never far from his thoughts.

“It came through my mind at one point today. At some points it’s not easy, but it goes through your mind and it’s something that’s always going to be there.”

While his thoughts were not always on golf on Saturday, he still managed to get through the day without a bogey while picking up nine birdies at Detroit Golf Club, the same as his opening round.

“It was just one of those days were it seemed nothing could go wrong. Even when I didn’t hit great shots they ended up OK,” he said.

Lashley started the third round with a one-stroke lead over long-hitting Cameron Champ, who slid down the leaderboard with an error-strewn 75.

“It was nice to get off to a good start, kind of calmed my nerves a little bit,” said Lashley, who had four birdies on the outward half.

Lashley was the last player to get into this week’s field, and only then after three withdrawals, the final one on the eve of the tournament.

Among other rewards, victory on Sunday would earn Lashley a spot in next month’s British Open at Royal Portrush.

He knows maintaining focus will be key.

“I’ll try to block out all the distractions, all the exemptions and everything that comes along with winning, because it’s a life-changing event,” he said.

“I’m hitting my irons great, driving it well. I’m just going to continue that tomorrow and see what happens.”