Lashing out – Does the Government understand its job 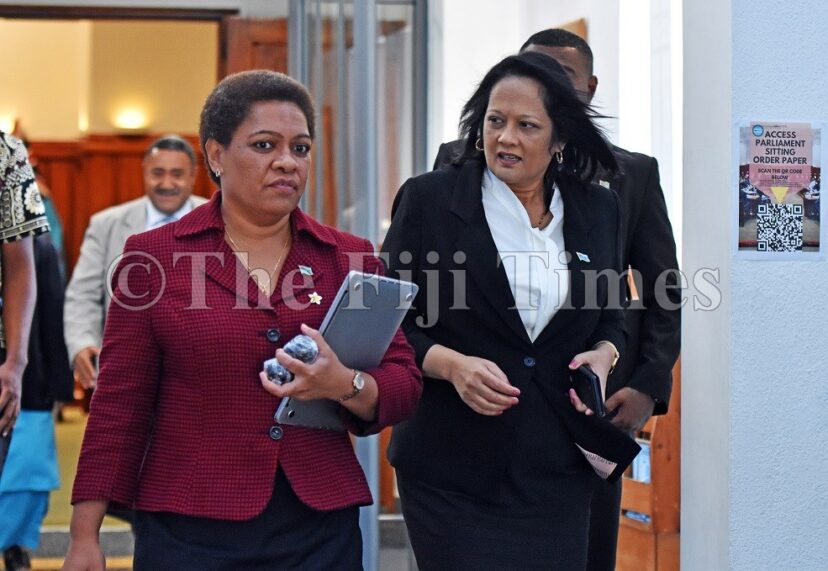 Minister for Women,Children and Poverty Alleviation Mereseini Vuniwaqa (left) and Minister for Education Rosy Akbar having a light moment after coming out of parliament during a break on Thursday, February 20, 2020. Picture: RAMA/FILE

Decisions and reactions by our political leaders on issues of national interest show that all may not be well in the Government’s decision-making process.

Outlined below are just a few recent cases that show that our Government is increasingly reacting like a human, not an impervious institution with the well-being of the nation as its core.

The recent decision by the Government to stop its contributions to the University of the South Pacific, as long as Prof Pal still heads it, is beginning to paint a very clear picture of the way it thinks and operates.

This was after the USP’s governing body, its council, awarded the beleaguered professor a new contract despite Fiji’s strong resistance.

The justification that Fiji used for holding back the money – even though the contribution was agreed in the national budget – seems too one-sided and contrary for those of us who have some knowledge of the Government’s past interference at USP.

For instance, the claim by Attorney-General Aiyaz Sayed-Khaiyum that the USP Council gave Professor Pal a new contract in spite of ‘considerable abstentions and opposition’ from within its ranks, runs against what he would call ‘the reality of the matter’.

Furthermore, if the mathematical formulation espoused by the Minister for Economy is to be followed then there is no longer a need for quite a number of countries that collectively own the university to be represented in its governing body. That would be a death knell to regionalism (if it ever existed).

Now that it seems certain that Fiji is not going to honour what it has said in its national budget it would pay, certain questions must then be asked:

Are Fiji students going to continue paying regional fees as opposed to international fees despite Fiji not paying its dues?

Will USP raise its fees right across the board, and in the process penalise every regional student that comes to USP, to cover the shortfall in its grants?

Is our government going to stand idly by, banking on Australia and New Zealand to step in and subsidise fees for our own Fijian students, while standing ready to reap the full benefits of having Laucala campus in the heart of Suva city?

If reports in the social media are anything to go by, Ms Vuniwaqa was asked to resign from the FijiFirst government after she refused to lend her voice in support of Bill 17. Apparently her vote was not enough for a party that demands absolute obedience from its members.

If that is what transpired, her opposition against the Bill (now law) marked a turning point in her association with the FijiFirst government. This ended in a military-like smear campaign, against her, by the Fiji Sun.

This to a woman who our government had, for the last few years, entrusted a ministry that tends to the needs of society’s most vulnerable people.

Was the smear in the Fiji Sun the government’s way of disassociating itself from her application to a UN position; a position that it saw fit to nominate her for in the first place?

Does it not want to see her succeed and break down glass ceilings that our own daughters, and sons, could then aspire to?

This leads me to another woman who continuously breaks glass ceilings in her own quiet way.

The continuing circus against Dr Rajni Prasad is a disgrace. Her name was, again, singled out and sullied in Parliament as someone who has been awarded a new position at USP simply on the alleged strength of the friendship between her husband and the USP’s vice-chancellor.

This is, firstly, despite the fact that the university has a much more stringent recruitment process when compared to the Fiji Government’s. Secondly, the local lady in question has a PhD degree that is directly relevant to that position.

Were Dr Rajni’s credentials publicly maligned by our government leaders just because she happens to be married to a vociferous critic of this government; one who immediately pointed out in his reply that it is quite insincere for Honourable Sayed-Khaiyum to be pointing fingers?

A PhD is the abbreviation for the highest academic degree one can attain in any university.

Indeed, lessons on the significance of glass ceilings and glass houses are not lost judging from the furore surrounding the personal attacks on the two ladies.

The latest cabinet reshuffle throws up some interesting things for us.

It has become reasonable to have a woman appointed at the Ministry of Women, but the return of Rosy Akbar to the ministry is quite intriguing given that she held that position prior to Ms Vuniwaqa.

According to Shamima Ali of the Fiji Womens’ Crisis Centre, the Ministry of Women was in a “shambles” before Mrs Vuniwaqa joined the Ministry in 2016.

Was this the reason why Ms Akbar was reassigned her former portfolio? That is, to show Ms Ali, regardless of what she thinks, of who or what really matters in Fiji?

More troublingly, will this mean that our new Minster for Women and Ms Ali as the leading advocate for women’s issues in the country may get off on the worst possible footing in their common objective to improve the standings of women in the land?

Given the above, it seems that Government is of the view that either you are with them or you are their worst enemy.

To treat political opponents and dissidents as mortal enemies is to superimpose a new political culture, taken from dictatorial regimes in other parts of the world, onto our own Fijian experience. But in Fiji the presence of a political opposition is actually justified and supported in our constitution.

It would do the Government well to remember that inclusive politics is what is needed to run a country well. When it meets political opposition, it simply means that there are some out there who have a different political vision to the Government’s.
The opposition also need to be heard and not demonised. These political opponents are not necessarily your enemies. Not if we all belong in a vuvale!

To pretend otherwise just shows the extent our political leaders are willing to go in order to maintain their hold on power over the very people they have been entrusted to serve.