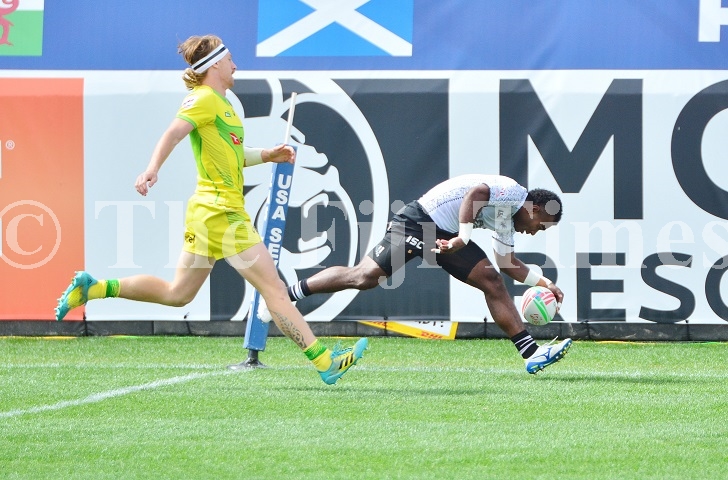 Jerry Tuwai goes in for the try against Australia during their last pool match at the HSBC USA 7s in Las Vegas. Australia defeated Fiji 26-15. Picture: JOBESA NAISUA

If Fiji is to finish fifth, it needs to win their 5th place semi-final match against South Africa and then the final.

Fiji would gain 13 points if it finishes fifth but in its way are fourth placed South Africa and the winner of the other fifth place semifinal between England and Australia.

Fiji is currently at third position with 72 points behind series leaders New Zealand and USA who each have 76 points.

But Baber said the gap had opened up with Fiji’s losses.

Last night, the team focused on their recovery to be on form for their matches today.

Baber said there should have a  card to Australian captain Lewis Holland and a penalty to Fiji for the dangerous tackle on Nacuqu in the first half.

Adding more to Fiji’s miseries was a yellow card issued to Tamani.

Nacuqu will now return home as the team continues to Vancouver.